RSS
← I Know Where I’m Going!
Intermission, please! or, are we done yet? → 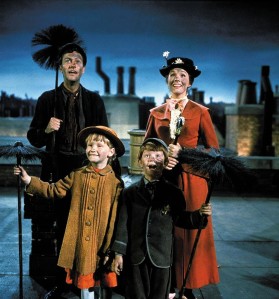 I recently watched Mary Poppins for the first time in many, many years. In fact, it was so many years that I had forgotten significant chunks of the plot. I had certainly forgotten how many songs were in it, and how much dancing. And I definitely had forgotten how delightful it was…if I ever properly realized it. Oddly enough, I think I enjoyed it more as an adult than I ever did as a child. Sometimes, I think children’s movies and books are wasted on the young.

When we finished watching my sister turned to me and said with some awe:

I love their expressions here

“That was really, really good.”

And I felt the same way.

I had been thinking about Mary Poppins because I had been reading about Saving Mr. Banks, which I haven’t seen yet, but want to. I was also in something of a Julie Andrews phase (Sound of Music, My Fair Lady Cast Recordings), so we put it on.

And were enchanted like a couple of children. My sister was reduced to a puddle of giggles during the entire “Step In Time” sequence. She said she had never realized just how whimsical it was; all these grown men quite joyously flapping like birds just because they can.

And is there anything better than Julie Andrews’ prim walk and demeanor as she does the most extraordinary things? And you’ve got to love anyone who wears pink shoes with a red dress, with soot on her face, marshaling her charges like a general, quite calmly explaining to their father that she never explains anything.

Notoriously, Jack Warner passed over Julie Andrews when he produced the film version of My Fair Lady. She was still relatively unknown outside the theater, despite the euphoric reviews of both the musical and her performance as Eliza Doolittle. So Audrey Hepburn was cast instead. However, our loss was also our gain. I guess we never could have had it both ways, since Mary Poppins and My Fair Lady were filmed at the same time.

Walt Disney was considering many different actresses (like Angela Lansbury) for the role of Mary Poppins, but when he and others saw Julie Andrews’ performance during The Ed Sullivan Show from the musical “Camelot,” they knew she was the one they wanted (see here for performance with Richard Burton of “What Do The Simple Folk Do”).

The book’s author, P.L. Travers, was less enthusiastic and told Julie Andrews that she was too pretty to play the part, but that she had the nose for it.

Dick Van Dyke is likewise utterly winning as Bert – who was created as a composite of many characters that appear in the book. He said in an interview that he was once listed in a British paper as having one of the worst accents ever, but his unique blend, of whatever it was, has its own charm and fits naturally in a film that is partially impressionistic, anyway.

Dick Van Dyke had never danced before making Mary Poppins, which I had not known. Apparently he did mime in his early career, so that may account for his good body control. The one things that usually tips me off if someone has danced before is how in control their movements look while dancing.

One thing that cracks me up about Mary Poppins is that she’s a bit of an egoist (though not as strongly as in the books). She primps, keeps a rather large mirror in her room, and declares herself to be “practically perfect in every way.” Also, if you think about it, the chalk/cartoon world they go to is all her doing, so when the penguins declare she’s their favorite person, all the farm animals sing about how much they love her and the jockeys let her win the horse race, it could be seen as an ego trip for her…all harmless, of course. 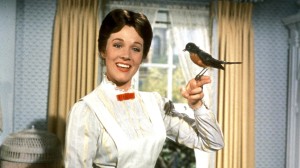 Another interesting bit I heard in the documentary that was on the Mary Poppins: 40th Anniversary Edition, was that for the robin that sings with Mary Poppins during “A Spoonful of Sugar,” they hired a professional whistler (I didn’t know those existed), but Walt Disney thought he had no personality so Julie Andrews did it herself.

There is something slightly unreal, magical, impressionistic, about the film. The backgrounds are painted mattes, which contribute to that feel. The music, especially songs like “Chim Chim Cher-ee” and “Feed the Birds” also contribute – suggesting a world beyond what we see. Mary Poppins admonishes Michael: “Never judge a book by it’s cover. I’m sure I never do.” And Bert sings:

Up where the smoke is all billowed and curled

“Tween pavement and stars, is a chimney sweep world

There’s things half in shadow and halfway in light.”

But in a poignant way, Mary Poppins kind of takes the magic world away with her. The children will never again jump into chalk pavement pictures or laugh on the ceiling. It makes me think of Peter Pan a little bit. There is a magic beyond, but we don’t live with it. It was just a moment when somebody lifted the curtain for us to see. 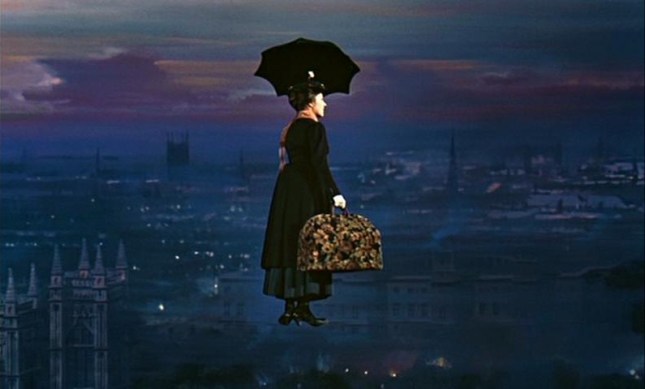 Posted by christinawehner on March 21, 2014 in Movies

← I Know Where I’m Going!
Intermission, please! or, are we done yet? →