RSS
← The Big Sleep – Movie and Book
Saving Mr. Banks and Thoughts on Disney and Travers →

The Private Lives of Elizabeth and Essex 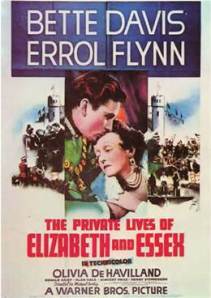 Apparently, Bette Davis and Errol Flynn loathed working with each other. Nanette Fabray – who had a small part as a lady in waiting to Davis’ Elizabeth I – said that Flynn and Davis would play their parts and as soon as the director yelled cut, stalk off in opposite directions. When Davis’ character was called on to slap Flynn, she gave it everything she had; and when he was called on to slap her on the rear, he similarly gave it everything.

Davis and Flynn were both top stars at Warner Bros. The previous year Flynn made The Adventures of Robin Hood, the highest grossing film for Warner Bros. Bette Davis won an Oscar for her role in Jezebel and they both starred together in The Sisters (in case you were wondering, Flynn was not one of the sisters).

Davis considered herself a serious actress, not just a star, and she was quite outspoken regarding what she wanted or thought and she was not quiet about her contempt for Flynn, who she thought was a pretty face and not a real actor. Errol Flynn, on the other hand, had no particular pretensions to greatness and preferred a more easy going approach to making films.

But it all works, somehow, in The Private Lives of Elizabeth and Essex. I don’t know why, exactly, but I enjoyed it a lot. The important thing is to be willing to go with it, no matter how slightly over-the-top it is, and let yourself get caught up in the central conflict and romance. Partially because of the presence of Errol Flynn, somehow it never entirely goes over the top. If Davis had had her way and they’d cast Laurence Olivier, I think the film could have potentially been too lugubrious.

The movie is about the romance between Queen Elizabeth I and Robert Devereux, the Earl of Essex. He’s had some military victories and is more popular than the queen. All the women in the court seem to adore him and all the men mistrust him. But the queen is besotted and he genuinely returns her love, though with less intensity.

All they do when they meet is quarrel, but they love each other, despite her fear that she is much older than he is. The only real trouble is that he is ambitious. He wants to rule and she knows it.

And the scheming that goes on in that court regarding Essex is something else. Even Elizabeth schemes – to keep him out of trouble, to get him to come back to court after a quarrel. Everybody schemes except Essex. He’s too straightforward for his own good. But no one schemes better than Donald Crisp as Francis Bacon.

The movie is quite a spectacle. It’s in glorious Technicolor, with extraordinary costumes, a dazzling collection of character actors…and the supreme Olivia de Havilland in an undeservingly small part, which she played so well that I wished I could have seen her more. De Havilland usually plays the good girl, but here she demonstrates, however briefly, that she can play a coquette and a schemer. I wish I could have seen her in more roles like that.

The film also offered Vincent Price an early, breakout role as Sir Walter Raleigh…who is no friend of Essex. Alan Hale is, for once, an enemy of Flynn’s, and Donald Crisp is magnificent as Essex’s friend who acts often as a go between for Essex and the queen and generally has his finger to the wind. Henry Daniel is also present, adding his snaky schemes to the mix for good measure.

The historical accuracy is, at best, atmospheric rather than accurate, more an excuse for a romance in heightened dramatic situations. Most of the characters are historical and there are many historical events wafting about in the background to lend the appropriate feel. There are references to Henry VIII and his many wives, the constant, nearly futile, struggle in Ireland and the deep fear of Spain.

It’s a curious combination: part Errol Flynn historical adventure (though the film is largely static in the manner of a play) and part Bette Davis melodrama: intensity and fun meet, in extraordinary, Technicolor costumes.

Notes: The movie was adapted from a play, “Elizabeth the Queen” by Maxwell Anderson. Because they were going to have Flynn in the film, the studio was going to call it “The Knight and the Lady” but Davis thought that was ridiculous since the movie was about Elizabeth, so they finally managed to get both actors in the title of the film with The Private Lives of Elizabeth and Essex.

Bette Davis loved realism. She was one of those actresses who, if she lived today, would shave off all her hair and go on a crash diet to look deathly ill. As Elizabeth, she was playing a woman thirty to forty years older than Davis was (she was around 30) and she shaved off several inches of her hair above her forehead so that it would look like she had no hair under her wig.

There is a lovely score by Erich Wolfgang Korngold, who also composed the score for The Adventures of Robin Hood and there are several Robin Hood deja vu musical moments. Even some of the sets look rather familiar.

Olivia de Havilland made eight movies with Errol Flynn and in two of them she didn’t get Flynn (for an enjoyable look at all eight movies they made together, check out the article “Errol Flynn and Olivia de Havilland” on Reel Classic). The Private Lives of Elizabeth and Essex was the first movie she made after her triumph as Melanie in Gone With the Wind (she was nominated for best supporting actress, but lost to Hattie McDaniel). Jack Warner of Warner Bros, however, had the idea that actors should be kept in their place, which is why de Havilland wound up with such a small role. To all accounts, she responded graciously. She did, however, have her revenge by winning a groundbreaking lawsuit against Warner Bros in 1943 regarding her contract, that was significant in reducing the power of the studios.

Posted by christinawehner on May 13, 2014 in Historical Drama

← The Big Sleep – Movie and Book
Saving Mr. Banks and Thoughts on Disney and Travers →

One response to “The Private Lives of Elizabeth and Essex”