It was on my bookshelf (I got a very nice copy at a library book sale) and I decided that it was about time that I read Doyle’s Sherlock Holmes to counter the great diversity of Sherlock Holmes adaptations I had seen on screen.

What I chiefly noticed was how Sherlock Holmes seemed to me a man of so many parts that no actor has ever succeeded in fully portraying him. I think actors must choose a certain interpretation and stick with it, but Holmes in the stories has quite a few moods and personality quirks.

He was more amiable than I had expected him to be; he really does have pretty good people skills – not that he always uses them. He’s good at putting his clients at ease and drawing them out to tell him their full story. He seems, especially, to have a knack for putting his female clients at ease, with an almost gentle (perhaps not exactly gentle, but reassuring) interest in their concerns. Out of the twelve stories, he has five female clients. He even takes a slight interest in their welfare and can admire their courage and fortitude. Watson, however, expresses disappointment at the end of the final story in the book, “The Adventure of the Copper Beaches,” that Holmes’ interest in his client, Violet Hunter, ceases as soon as the case is over. Holmes also has, most famously, tremendous admiration for Irene Adler, who manages to outwit him in “A Scandal in Bohemia.”

He also can alternate between tranquil cold logic and fanatical pursuit. Here is Watson’s description of him in “The Boscombe Valley Mystery.” 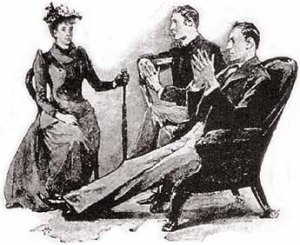 “Sherlock Holmes was transformed when he was hot upon a scent as this. Men who had only known the quiet thinker and logician of Baker Street would have failed to recognize him. His face flushed and darkened. His brows were drawn into two hard black lines, while his eyes shone from beneath them with a steely glitter. His face was bent downward, his shoulders bowed, his lips compressed, and the veins stood out like whipcord in his long, sinewy neck. His nostrils seemed to dilate with a purely animal lust for the chase, and his mind was so absolutely concentrated upon the matter before him that a question or remark fell unheeded upon his ears, or, at the most, only provoked a quick, impatient snarl in reply.”

Here is yet another side of Sherlock Holmes, from “The Red-headed League”

“All afternoon he sat in the stalls wrapped in the most perfect happiness, gently waving his long, thin fingers in time to the music, while his gently smiling face and his languid, dreamy eyes were as unlike those of Holmes, the sleuth-hound, Holmes the relentless, keen-witted, ready-handed criminal agent, as it was possible to conceive.”

Dr. Watson is also rather different in the stories; he’s a bit of a blank wall. We know he is married, sympathetic to other people’s problems, handy with his gun, game for all Holmes’ adventures, but his main purpose is to reflect light on Holmes. The stories he selects to tell – or that Doyle chose to write – are mostly meant to demonstrate Holmes’ incredible deductive powers, so he chose cases that were on the surface, simple or even trivial, arguing that more sensational cases are less interesting. In some of the cases, there isn’t even anything criminal going on, just dubious or mysterious. He shows how much he can learn from a man by just looking at his hat in “The Adventure of the Blue Carbuncle” and demonstrates his ability more than once to determine the true identity of various people. 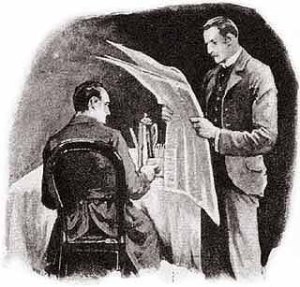 I think I have decided that I am okay if my Sherlock Holmes film adaptations are not like the stories. I’ve seen at least seven different actors play him: John Barrymore, Basil Rathbone, Jeremy Brett, Jonathan Pryce, Robert Downey Jr., Benedict Cumberbatch, and Jonny Lee Miller. My favorites are Basil Rathbone and Benedict Cumberbatch, for reasons that have very little to do with accuracy, since I have only just read any Sherlock Holmes stories. Basil Rathbone’s version is a lot of fun. And even though his Watson (Nigel Bruce) is not the brightest chap, their interactions are entertaining. His later Sherlock movies portray him practically as a superhero, friend of the people type. But that’s not entirely an inaccurate idea. In the stories, Holmes frequently takes matters of justice into his own hands, deciding the fate of people, quite apart from the police, and generally providing assistance and pretty much helping anyone who comes to him, regardless of finances or class.

I also really enjoyed Benedict Cumberbatch’s rendition of the character, even though his is a slightly more neurotic portrayal, and perhaps a little more emotional, but marvelously well done and he has excellent chemistry with Martin Freeman’s Watson. Jeremy Brett is the one usually considered the most accurate. I haven’t seen many of his; the one I did see, however, was extremely close to the story I had just read, “The Adventure of the Blue Carbuncle,” but it was so extremely close that it was seemed literally to be word-for word. This might be an eccentric complaint, but I think that is actually too close for me. I want my movies to bring something new, otherwise I feel like I might as well just read the books. And it was well worth reading. I don’t know why it took me so long to actually get around to reading Doyle’s Holmes.

Posted by christinawehner on August 18, 2014 in Fiction