RSS
← The Adventures of Sherlock Holmes (1892) – Arthur Conan Doyle
Can A Movie Be Too Close to the Book? →

The Letter (1940) – Bette Davis and Her Unsympathetic Roles

Bette Davis liked playing unsympathetic roles; she actually preferred it. Her first one was in 1934, her breakout role, as Mildred Rogers in Of Human Bondage with Leslie Howard. She was so impressive that her name was written as an add-in on the ballot for Best Supporting Actress, though she lost. She went on to play so many of these roles that it was all I ever heard about  when I first began to watch her films. But in the first fifteen movies that I saw her in, she was thoroughly sympathetic in them all.

Of course, I even sympathized with her in Jezebel, so perhaps I just have the wrong perspective on things. I kept hearing about how bad her character was in that movie, but really, she just seems extremely proud, stubborn and willful – her own worst enemy – but not especially evil.

However, I am happy to say that I have finally seen a movie where she plays a genuine Jezebel type. The Letter, directed by William Wyler, is based on a short story by W. Somerset Maugham. Set in Malaya, it is about Leslie Crosbie (Bette Davis), wife of a rubber planter, who shoots gambler Geoff Hammond because he was drunk and assaulted her…or so she says. Her husband (Herbert Marshall) is devoted and protective and gets his lawyer (James Stephenson) to defend her at the trial- everybody thinking the trial will be a mere formality. Local opinion is strong against Hammond, especially when they find out that he had a Chinese wife (Gale Sondergaard). 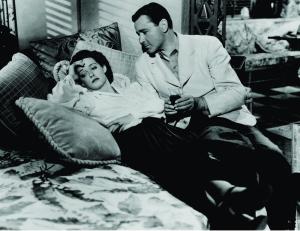 However, it soon comes to Mr. Joyce’s attention that there is a letter, in the possession of Hammond’s wife, that she is willing to sell. A letter that indicates that perhaps Leslie’s relationship with Hammond was not what she said it was and might cast doubt on her story in court. Every instinct of professional ethics is against it, but friendship with Leslie’s extremely devoted and trusting husband convinces the lawyer to buy it.

This is one of the finest performances I have seen Bette Davis give. She plays Leslie Crosbie so demurely, so properly, ladylike, watchful, always working on her fine lacework, but still managing to convey the inner passion underneath it all that no one else can see, except the lawyer and only because the letter demonstrated to him that she is not as she appears.

I read a fascinating article on the blog The Hollywood Revue, called “The Significance of White Lace in The Letter (1940),” that talks about Leslie’s penchant for lace work. Leslie is always working on lace projects and at one point even goes out wearing a shawl of white lace when she goes with the lawyer to get the letter from Hammond’s wife.

The Hollywood Revue points out that white symbolizes innocence and “it’s as though she’s trying to create a shroud of innocence for herself” with her constant wearing of white clothes and making white lace, as well as demonstrating her “attention to detail” in her lies. I think the lacework is also a symbol of irony. Lacework seems very domestic and tranquil, but highlights the difference between Leslie’s apparent employment and her secret life. Yet another possible meaning of the lacework is that Leslie uses lacework to channel all her pent-up energy into something that requires tremendous focus and concentration to create something highly intricate. Or is it “the tangled webs we weave?”

I could probably go on forever about the lacework, but it is a wonderful detail in the film, highlighted repeatedly by the camera and by comments made by other people.

Leslie’s husband is played by Herbert Marshall, who has one of the loveliest speaking voices in cinema. His love for Leslie is so strong, but curiously blind. He would forgive her anything and seems, as his lawyer notes, to have lived ten years with his wife and hardly known her at all. He doesn’t, apparently, love the real woman… or even know her. Joyce is played by James Stephenson, who was a relatively unknown actor at the time and did a marvelous job. He is torn by his conscious and utterly fascinated by the obscure depths of this woman he has to defend.

Not only is the acting is good, but it is a beautiful film visually, and is full of memorable moments, most notably the opening scene, when the quiet night is broken with the sounds of gunfire, then we see a man stagger out of a house, with Bette Davis behind him, shooting repeatedly.

I do have one complaint, however, regarding this marvelous film, which is the ending. Sometimes censorship makes a movie better (like Double Indemnity), but in this case I think it weakened the film. In the play, Leslie Crosbie lives out the rest of her life without her husband. However, since crime could not go unpunished under the Hays Code, William Wyler had to change the ending. What happens instead is that Leslie is murdered by Hammond’s widow. The widow is seen by a guard (presumably so the audience is assured that she, too, will be identified later and pay for her crime – I must say that Hammond sure picked a murderous lot of women to love) and the camera pans over to Leslie’s lace, laying over her chair in her room.

My problem with this ending is that the film seemed to me to be building to something else. There is a dramatic scene near the end when Leslie admits to her husband – after he forgives her and asks if she loves him – that she still loves the man she killed. The very bleakness of this statement, however, is undercut by having her murdered very soon afterwards, a convenient out that saves her from having to live with what she did. I was expecting her to turn into the crazy lace lady, always doing her needlework, without soul, without thought, living her days out having killed her own heart. The actual ending of the film, I felt, is deflating and not consistent with what came before.

The ending does not, however, detract from a very good film. And I did still find it in my heart to feel for her, despite her evilness. Perhaps I’m just chronically in sympathy with her.

Posted by christinawehner on August 20, 2014 in Movies

← The Adventures of Sherlock Holmes (1892) – Arthur Conan Doyle
Can A Movie Be Too Close to the Book? →