I was recently tagged by Crafty Theater to participate in the Bookshelf Tag and I am delighted to contribute. Crafty Theater suggested, however, that I could do a Movie Shelf Tag in lieu of a bookshelf.

The rules are : answer each question and then tag five other people to participate in the bookshelf tag. Previous blogs have mentioned that it is a good idea to tell the person who tagged you when you put your post up so they can go read it.

In the questions, I have substituted the word movie for book and watch for read. Crafty Theater’s own post on their bookshelf can be found here.

1. Is there a movie that you really want to see but haven’t because you know that it will make you cry?

Dark Victory. I have been putting off seeing it for the longest time, ever since I even became aware of Bette Davis and classic movies. Dark Victory is supposed to be one of the great movies that Davis did, one of those essential, iconic Bette Davis performances, but I know I will cry. I even bought the film and still haven’t seen it.

It’s often called a “three-hanky” film, a “woman’s weepy,” a “women’s picture” or melodrama.  Made in 1939, the movie is about a wild heiress who finds out that she is dying of cancer. There is a famous scene I always heard about, near the end, where she discovers she is blind and knows that the end is near. I lost a family member to cancer, so I just know I will be a basket case by the time I’m done.

I might have to line up a double header, with Dark Victory first, followed by a particularly zany comedy.

2. Pick one movie that helped introduce you to a new genre. 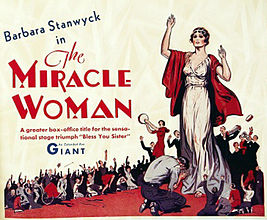 The Miracle Woman, with Barbara Stanwyck and directed by Frank Capra. Not only is this the movie that started me off on a serious, all things Barbara Stanwyck kick, but it also introduced me to pre-code films, something I had not been aware of previously. I was surprised at the dynamic energy of the film, made in 1931, and it made me curious to see more movies from that era.

Pre-code movies are those movies made in-between the silent era and 1934, when the Hays Code became most rigidly enforced. I found I really enjoyed pre-code films, not because they were naughty, but because there was a unique energy to their films that is lacking later. They tend to be very short movies, often less than 90 minutes, many (though not all) are quite taut, but not rushed. The movies especially made by Warner Bros, could have a pretty gritty feel and I enjoy the atmosphere and I even like how their music is used way less and scenes unfold more deliberately.

3. Find a movie that you want to rewatch.

I rewatch all the movies I own quite often, though some I turn to more then others. I cannot seem to get enough, recently, of The Band Wagon or Double Indemnity. But I think if I had to pick the one that I most want to rewatch at this moment, it would be the comedy Palm Beach Story, directed by Preston Sturges and starring Claudette Colbert, Joel McCrea, Rudy Vallee and Mary Astor. I’ve been watching new Claudette Colbert movies and it’s making me want to revisit one of the first ones I ever saw her in.

4. Is there a movie series (tv show?) that you’ve seen, but wished that you hadn’t?

It used to be Downton Abbey. I was addicted and it would drive me crazy that I had to wait a whole year for the next season; however, since each season seems to get progressively worse, I don’t mind waiting so much anymore.

It’s not a movie series, but I wish I hadn’t seen it – and I saw it twice! – was Les Miserables. Those people cannot sing! There is a mania for making musicals with non-singers. It’s like making a movie with dancing and casting klutzes. This is a pet peeve. But the whole point of a musical is to have music, to use music to tell your story. Bad singing – however dramatic – is not music. It’s an assault on the ears.

5. If your house was burning down and all your family and pets were safe, which movie would you go back inside to save?

just looking at this picture gives me a happy glow

Pride and Prejudice, with Jennifer Ehle and Colin Firth. This movie has sentimental value, as well as being a movie I adore for its own sake. I was introduced to it by my mom and aunt, it is the movie that led me to my passion for all things Jane Austen, and it is, in my opinion, one of the finest adaptions of a Jane Austen novel. It is also one of those films I have so many memories watching through the years with various family and friends and I would want to save it because it would be the perfect movie to comfort ourselves after we lost our house to flame.

6. Is there one movie on your movie shelf that brings back fond memories?

Pride and Prejudice…although Sound of Music brings back wonderful memories, too. Whenever I got sick, it would usually manifest itself as a sore throat and I would wake up early in the morning (around 5 or 6) and the movie I always turned to was Sound of Music because it always left me feeing so uplifted. It might have been my favorite childhood movie…with stiff competition from Singing in the Rain.

7. Find a movie that has inspired you the most!

I don’t know if I am inspired by movies. I love movies, I talk about them and think about them and they form part of my experience that I draw on, just like books do, but the highest inspiration I get from them is the inspiration to read a book or form a new interest. In that sense, movies like Pride and Prejudice and Shall We Dance (with Fred Astaire and Ginger Rogers) were hugely inspirational by introducing me to Jane Austen and to the music of George Gershwin and all the other composers of Gershwin’s era who wrote the music that comprises The Great American Songbook.

8. Do you have any autographed movies (memorabilia)? 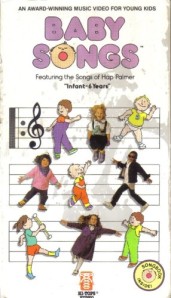 9. Find the movie that you have owned the longest.

This is embarrassing, but the movie I have owned the longest is a VHS copy of a film called Baby Songs. I used to watch it when I was one and two years old and have had the dubious experience of seeing it periodically through my life as other babies watch it. I didn’t have the heart to throw it away. The cover is in tatters, but I’ll probably still own it when you can’t even play VHS anymore.

10. Is there a movie with an actor (or by a director) that you never imagined you would watch or enjoy?

Little Caesar, with Edward G. Robinson. I still have not, to this day, figured out why I like this movie so much. It’s the movie that made Robinson a star and forever set his image as a gangster, but I wouldn’t have thought I would like gangster movies. It’s not much longer than an hour, but it’s a fun hour. In fact, I surprised myself; I have enjoyed everything I have ever seen Edward G. Robinson in. He is truly one of the great actors of the classic movie period.

Here is my list of blogs I have tagged for the Bookshelf Tag. Please feel no pressure to participate if you don’t want to or cannot. And if you really don’t want to do a bookshelf, but would rather do a movie shelf, I couldn’t complain.

Posted by christinawehner on September 10, 2014 in Movies

9 responses to “Bookshelf Tag…or, in my case, Movie Shelf Tag”