A Connecticut Yankee in King Arthur’s Court – Movie and Book and What If It Was I Who Had Traveled Back in Time?

Some time ago, I read Mark Twain’s A Connecticut Yankee in King Arthur’s Court and recently watched the 1949 film of the same name with Bing Crosby. The movie is quite a bit more light-hearted than the book, with Bing Crosby singing his songs with his trademark easy-going humor. The book is oddly serious at times; it starts out as a biting and often hilarious parody of chivalrous fiction, specifically the Arthurian legends, only to end with an exceedingly bleak indictment of modernity.

In the book, the man who goes back to King Arthur’s time, Hank Morgan, is from Connecticut and was a supervisor at a weapon’s factory. In the movie, Bing Crosby’s Hank Martin is a blacksmith. What both these men have in common, however, are some basic skills, the ability to build modern devices, often weapons, but also other useful devices (like a safety pin). And in both versions, Hank is handy with a lasso and can bring down a knight in a joust without having to resort to actually wearing armor and using a lance. They also both use their special knowledge of an approaching eclipse to pretend that they are wizards who can make the sun cease to shine and Crosby’s Hank has matches and a piece of glass to create fire.

Mark Twain wrote his book in 1889 and in his book Hank Morgan is clearly more enlightened than King Arthur and his knights. He introduces baseball, democracy, shows the king his realm and the suffering and slavery within. But all his knowledge is ultimately of no use. He restructures the kingdom, only to have it all undone when he takes a trip and Arthur discovers Lancelot and Guinevere’s love affair and the kingdom disintegrate into war. When Hank comes back, the people have deserted him and he and a faithful few are besieged by knights. He puts up electric wires all around his refuge and every last knight is electrocuted en masse (because of their armor). The besieged are surrounded by a wall of fried knights and cannot get out because of their own electric fence and the electrocuted men. It is truly an appalling end and although the war was brought about by medieval ignorance (a big theme in the book), it seems as if Twain negates his parody with such utter destruction, which critics have often likened to what was to come in the trench warfare of WWI. Superstition and ignorance versus soulless machines, but it is the final scene that really stays with the reader. 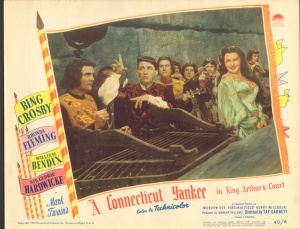 The movie, made in 1949, completely omits the bleakness and is sheer good-humored, Technicolor fun – the kind of film where people seem so happy to be living that they have to sing.

Bing Crosby’s Hank Martin is still more enlightened than the medieval people, but mostly because he’s more cool (Bing Crosby generally plays people who are very cool and sing cool songs). Crosby sings, woos Alisande (Rhonda Fleming – known as The Queen of Technicolor for how well her red hair filmed in color), shows the musicians how to play cool music, has a wizard battle with Merlin, hangs out with Sir Sagramore (William Bendix), lassoes Sir Lancelot, takes King Arthur (Sir Cedric Hardwicke) on a trip to see his kingdom and makes a gun. He does die at the end, but he is translated back to the future and meets Alisande’s descendent (or possibly her reincarnated self).

I watched it with my Nana, who remembers seeing it when it first came out. She was walking to school the next day and met her friend, who had also happened to see the film that weekend. She recalls that there was no one on the street and the two of them walked to school, all the while singing the film’s most infectious song “Busy Doing Nothing.”

In some ways A Connecticut Yankee in King Arthur’s Court makes me think of The Court Jester in its medieval comedy, jousts, and fun with medieval language, though Bing Crosby’s character has things a little more together than Danny Kaye’s.

I was also rather struck by the fact that they chose to set the beginning of the film in 1912 as opposed to the 1940s. I think they did this so that he could reasonably be a blacksmith and therefore have some useful skills when he was sent back in time. And that got me thinking. Many people in American have such specialized and specific knowledge that if we were to be sent back in time, we might be of no earthly use in the past. I wondered, if I were sent back in time, what could I do? I could never build a gun, let alone a safety pin.

Bing Crosby at his blacksmith’s ship, sharpening a sword with William Bendix

I can play the piano, but pianos hadn’t been invented yet. Not even the harpsichord was in use (which wouldn’t be until the fourteenth century). And I couldn’t build one. I could, possibly, explain our modern musical notation to them and musical theory. Music in the 6th century (when Arthur was king) was monophonic, which means a single line of melody, and was generally vocal. I suppose I could try to scare the living daylights out of people with my harmony, though I am not sure if I would survive such a performance.

One thing I’d have is my phone. (Bing Crosby had matches on him when he was sent back, I would probably have a cellphone). I could play alarming music and shine the screen at people until my battery died.

I could also teach sanitation, washing hands and such, but I couldn’t really help with the plague or other diseases. Nor do I think writing or blogging would be especially useful. My best bet might be to employ my mediocre juggling skills and become a court jester.

What would you do if you were sent back into King Arthur’s day?

Posted by christinawehner on November 14, 2014 in Fiction, Movie Musicals

4 responses to “A Connecticut Yankee in King Arthur’s Court – Movie and Book and What If It Was I Who Had Traveled Back in Time?”