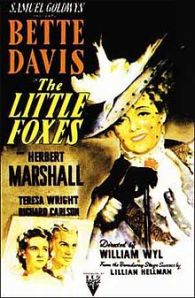 The more I see Bette Davis, the more I enjoy her movies. She’s been a bit of an acquired taste for me, but you usually have to really like Bette Davis to enjoy her films because she tends to dominate them. However, though she is wonderful in The Little Foxes, there is also plenty of room for her co-stars and it is actually a very good ensemble performance.

The Little Foxes was originally a play, written in 1939 by Lillian Hellman, who adapted her own play for the screen in 1941, even adding a character. The play was critically well received, but Hellman felt that the movie was even better, which was also critically well received. It was directed by William Wyler, who had already directed Davis in her Oscar winning role in Jezebel (1938) and Oscar nominated performance in The Letter (1940). She would be nominated for another in The Little Foxes.

The title of the play comes from the Bible, Song of Solomon 2:15: “Take us the foxes, the little foxes, that spoil the vines: for our vines have tender grapes.” The little foxes who are spoiling everything are the three Hubbard siblings, wealthy upstarts in the South during the early 1900s, preying on the world for their own gain.

Ben Hubbard (Charles Dingle) is the eldest, richest, sharpest, most ruthless and still unmarried. Oscar Hubbard (Carl Benton Reid) married a former southern belle (Patricia Collinge) to get hold of her plantation and has one son, the improvident, useless Leo (Dan Duryea). Their sister, Regina Giddens, married a banker, Horace Giddens (Herbert Marshall), and they had one daughter, Alexandra (Teresa Wright).

Around these characters, the story follows three main story threads: the three sibling’s attempts to finance a cotton mill, Regina’s attempts to gain financial independence from her husband and brothers and Alexandra coming of age and coming out from under her mother. And through the story, the brothers will discover that they have grossly underestimated their sister. 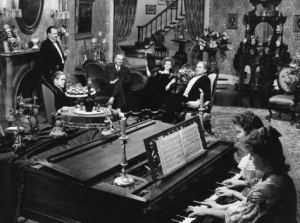 en and Oscar don’t have enough money to fund the mill and they and Regina want Horace to invest some of his own. However, Horace – who has a bad heart and a limited time to live – is not interested. He knows he’s dying and has had it with the machinations of his brothers-in-law and was hoping that his wife and he could stop fighting and come to an understanding. When he returns from the hospital, he is disappointed to discover that nothing has changed and all the three want out of him is money, which he refuses to give.

Meanwhile, Alexandra is spending a lot of time with a young, local newspaperman, David Hewitt (Richard Carlson), who loves her. She, meanwhile, is coming to understand what is going on around her: why her parents are arguing, how unscrupulous her uncles are and how their business practices keep wages unfairly low and take advantage, especially, of the black community, and of how unhappy her beloved Aunt Birdie (Patricia Collinge) is in her marriage to Oscar. She has a more distant relationship with her mother, but worships her father and is upset at how her mother’s attempts to get him to invest money are wearing him out.

William Wyler and Bette Davis fiercely disagreed during the filming of the movie, mostly over Davis’ portrayal of Regina. Wyler wanted her more sympathetic and Davis wanted to play her as a woman who looked her age and was coldly ruthless, though I think Davis’ performance still leaves room for shades of sympathy, or at least understanding, for her. But really, when a woman drives her husband into a heart attack and then calmly sits by without even getting up to get him his pills, there are only so many ways to play a character like that.

Regina’s father was a man who apparently came from nothing and worked his way up, leaving everything to his sons, but nothing to his daughter, who he seems to have neglected and regarded as being of little importance. In desperation, Regina married Horace Giddens, but was disappointed and disgusted to discover that Horace was not an ambitious man. He had his bank and that was enough for him.

What Regina wants is not just wealth, but independence. She wants to live somewhere else (Chicago, perhaps), travel, do things, and she intends to do all these things with her daughter, Alexandra. At first, I was not quite clear how much she cared for her daughter, but I think in her own way she does and that she believes herself to be a good mother. I was also initially surprised at how little she interfered in Alexandra’s life, but she says at one point that she never liked to be interfered with as a girl and so she doesn’t interfere with her daughter, either. She is also projecting all her childhood desires onto her daughter; she assumes that Alexandra would want the things she wanted.

Another theme in the film is standing by while others do wrong. This is spoken by Birdie Hubbard, brilliantly portrayed by Patricia Collinge. Birdie had once believed that Oscar loved her, only to discover that he had been after her plantation and the respectability that her aristocratic family line could bring him. She is an alcoholic now, but she is devoted to Alexandra. She loves her far more than her own, weaselly son, Leo. But she is afraid that Alexandra will end up just like her, dominated by the Hubbards, meek and cowed and obedient to their will.

There is a wonderful scene where the three apparently weak ones, Horace, Alexandra and Birdie enjoy an affectionate tea, free of the presence of anyone else. Also present is Addie (Jessie Grayson), the black woman who is part housekeeper and part surrogate mother to Alexandra, and David Hewitt. Birdie reminisces about her beloved mother and past life on her plantation and how she was deceived by Oscar. And she says something that makes an impression on Horace, that her mother always said; that one ought not to stand by and let people do wrong.

The acting is really top-notch, especially Patricia Collinge, as the pathetic, tragic, cowed woman who holds on to her memories for dear life and has so much affection to give, but so few people to give it to. Patricia Collinge is actually, along with Charles Dingle, Dan Duryea and Carl Benton Reid,  reprising her role from the play. Also in the play, Tallulah Bankhead (Lifeboat) played Regina, but Wyler wanted Bette Davis for the film. Davis and Marshall were reunited from The Letter and Teresa Wright and Patricia Collinge would go on to be mother and daughter in Shadow of a Doubt.

Herbert Marshall has one of the most lovely speaking voices in the movies and it lends him such tragic, tired wisdom. Dan Duryea plays a weasel as only he can and Charles Dingle is absolutely perfect as the insufferably good-humored but utterly ruthless business man. And Bette Davis shines as she schemes with, argues with and ultimately triumphs over her brothers. But her triumph comes at a great cost.

The film’s ending is one of those classic endings that really make the whole movie sing. It’s part cynical that the little foxes will continue to prey on the world, part commentary of the cost for a woman when she tries to make her own way, and part hopeful for the future in that there are people who will stand up to them, like David Hewitt and Alexandra.

Posted by christinawehner on November 19, 2014 in Movies