Books I Promised Myself I Would Read – The Elusive One: War and Peace 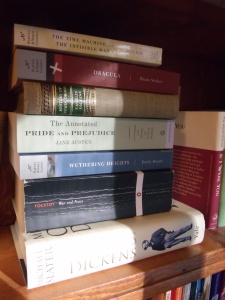 Every year, I make a list of books that I want to read. Usually in making the list, however, my eyes are bigger than my stomach, or my brain, in this case. I read perhaps half the books on the list. But on that list, every year, there are a few books that I have absolutely promised myself that I will read, no matter what else happens in my life. They are usually works of fiction and usually large books (I never have to promise myself that I will read non-fiction; that just happens and tends to follow the whims of my current interest in life, whether it’s the crusades, classic films or WWI).

The books I promised myself I would read in 2014 were:

I read every one of them except War and Peace. And I’d promised myself in 2013 that I would read it! I tried to read it once, years ago, and got halfway through only to get bogged down in a battle. By the time I was ready to dig back in I realized that I had been away too long and could not follow the thread or keep up with who all the characters were anymore. I didn’t want to start the book all over again, so the book has been sitting, tauntingly, on my bookshelf ever since, with the spine creased to remind me that I have once attempted to plow my way through.

What makes it worse is that my sister has already read it three times and is planning on reading it again this summer! I asked her why she keeps reading it and she said it is because the book has so much in it, she never feels that she quite has a handle on it.

I am going to read it this year…so help me!

Here are a few other books that I have promised myself to read:

Wuthering Heights – I’ve never wanted to read this book before because Heathcliff sounded exactly like the kind of character I would hate. What I’d heard gave me the impression of his being a Count of Monte Cristo kind of character and the Count’s thirst for revenge, hardness of heart regarding all the suffering he causes and complete certainty that he is right to wreak his revenge very much repelled me when I read the The Count of Monte Cristo several years ago. However, I watched the 1939 Wuthering Heights. I was right; I didn’t like Heathcliff, but as I was reading an introduction to the book, I read that there are actually divergent views of the book. Some people feel the book is all about Cathy and Heathcliff, while others are interested in the children and see Heathcliff as more of a temporary disturbance: he tries to wreak revenge, but when he is dead everything goes back to the order that was before him. The author of the introduction felt that both elements are in the book and I am now extremely curious to see what it is like.

Charles Dickens: A Life Defined by Writing – written by Michael Slater, I have had this book on my shelf for at least five years now and I am resolved that this year I shall read it. It has always seemed to me that once I get a book on my bookshelf, I never read it. I am always so busy trying to finish my library books that the books I own go by the wayside. 2015 is going to be the year of the books I own!

Dracula – I’ve watched several film versions in 2014 and I thought it would be fun to make comparisons.

Show Boat – I love Jerome Kern’s musical and especially the 1936 film version with Irene Dunne, Paul Robeson and Helen Morgan. I suspect that I will like the musical better than the book, by Edna Ferber, but you never know. Ferber was a very popular author in her time and had several of her books adapted into movies.

The Mystery of Edwin Drood – I am on a quest to read every single novel written by Charles Dickens and I have three more to go: Edwin Drood, Nicholas Nickelby, and The Old Curiosity Shop.

Do you have any books that you have made a special promise to yourself that you will read?

Posted by christinawehner on December 31, 2014 in Books

2 responses to “Books I Promised Myself I Would Read – The Elusive One: War and Peace”