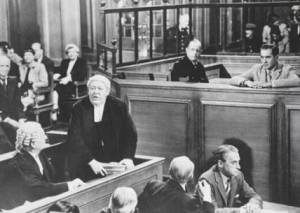 One of the best adaptations of an Agatha Christie story is Witness for the Prosecution, released in 1957 and starring Charles Laughton, Marlene Dietrich, Tyrone Power and Elsa Lanchester. It is a courtroom drama, but also a suspense story and even a bit of a comedy. It is one of those films that you think perhaps Alfred Hitchcock could have directed, though it does contain the trademark biting wit of the actual director, Billy Wilder, who also co-wrote the screenplay, with barbed words and witticisms zinging through the courtroom.

The movie is known for its surprise ending and when I first saw the film, I unfortunately knew the surprise, or at least some of it. But what I discovered is that even though I knew the twist at the end, I did not have the ins-and-outs of how it was worked out quite right and my enjoyment was nearly as high as if I had not known what was coming. And even knowing everything, the film loses nothing in subsequent viewings. There is too much humor, good characterizations and the fun of knowing what is coming and watching people’s reactions to things other characters do not know.

Not only did the movie introduce me to Billy Wilder, Marlene Dietrich and Charles Laughton (I already knew Tyrone Power from his swashbucklers, like The Mark of Zorro and The Black Swan), but it also made me want to read the original Agatha Christie story. Witness for the Prosecution is based on a 1953 play, which Agatha Christie adapted from her own short story from 1925. I read them both and it was fun to see how the basic story remained the same, but was changed to suit the increasingly visual mediums, from page to play to celluloid. 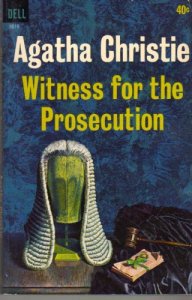 But the story remains the same in all three. Leonard Vole is a pleasant young man who seems to have a way of unconsciously making people, especially woman, like him. He becomes platonically involved with an elderly lady who is murdered, but leaves all her wealth to him. Unsurprisingly, he is then accused of the murder. His solicitor and barrister work to get him off in the face of nearly impossible odds. To make it worse, Vole’s German wife, Romaine (Christine in the movie) seems curiously antagonistic towards him and surprises everyone by refusing to give him an alibi and instead stands up in court to denounce him (since they were not legally married because she had a husband in Germany still living). The solicitor and barrister then receive evidence that might disprove her story.

Short Story by Agatha Christie (1925)  – The short story is told from the perspective of Leonard Vole’s solicitor. We see everyone, Leonard and his wife Romaine, from his perspective. In this original version, Romaine dominates the story. The story is really about her, though we do not meet her right away. The solicitor, Mr. Mayherne, believes Leonard when he tells him he is innocent, though the case looks very bad, but cannot figure out the motivations of Romaine.

In England they have solicitors and barristers. The solicitor is the one who works closely with the client, acts by the authority of the client, but cannot speak in court. The barrister does not have as much contact with the client, cannot act for them, but is the one to make the case before the judge. In the short story, we hardly meet the barrister. He has perhaps one line, but the story is not centered in the courtroom. It begins in Mayherne’s office, passes through the courtroom briefly and then wanders away as Mayherne follows a lead that might break Romaine’s testimony. It is very interesting, but lacks punch when you already know what is coming. 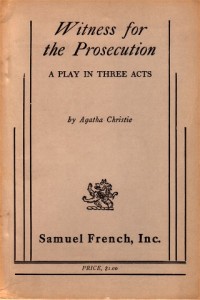 Play by Agatha Christie (1953) – In his introduction to The Mouse Trap and Other Plays, Ira Levin writes that Agatha Christie began writing plays because she felt that when other people had adapted her novels into plays, they adhered too closely to her novels, thus making the play confusing. When she adapted her own works, she changed and simplified plots, once even changing who the murderer was and occasionally removing Hercule Poirot from his own story. For “Witness For the Prosecution,” however, she expanded the plot rather simplified it, though she does change some things.

In the play, Mayherne becomes Mayhew, but must share space with the barrister, Sir Wilfrid, as the story becomes a courtroom drama. The plot remains the same and Romaine remains a figure of mystery, much speculated on by the lawyers. And where the short story really doesn’t speculate on who the murderer is if Leonard didn’t kill her, the play offers a suspect in the murdered woman’s housekeeper, the extremely bitter Janet McKenzie, who is also in the short story but less prominent. The play also provides one extra twist to the end of the story that was not in the original story.

Film, directed by Billy Wilder (1957) – Reportedly, Billy Wilder did not want to make Witness for the Prosecution; he felt an adaptation of a play wouldn’t be particularly challenging for him. However, he does an excellent job and really brings the story to life. Where the play is just a courtroom drama, Billy Wilder brings humor and humanity. The biggest change is how he makes Sir Wilfrid (Charles Laughton) the center of the story and gives him a story of his own that is separate from the trial, though connected.

Sir Wilfrid worked so hard that he suffered a heart attack. The movie opens with his return to his office with a nurse in tow (Elsa Lanchester) and orders from his doctor not to take any stressful cases. But Mayhew the solicitor brings along Leonard Vole (Tyrone Power) in an effort to interest Sir Wilfrid. With his nurse protesting all the way, he decides to take the case. Suddenly, not only is Leonard Vole’s life at stake, but also Sir Wilfrid’s, who has to take pills throughout the trial for his heart. 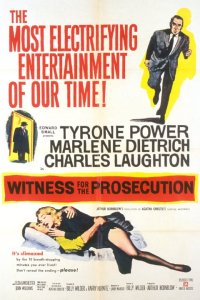 The relationship between Sir Wilfrid and his nurse, played by married couple Laughton and Lanchester, is great. She is the super-cheerful, commanding kind of nurse so often found in Agatha Christie novels who have a habit of saying “we” instead of “you” (how are we doing today?). But she has her match in Sir Wilfrid, who hides cigars in his cane and whisky in his thermos instead of cocoa, and their interaction provides half the laughs. But they also develop an unexpected and mutual respect for each other in the end.

Laughton is the real star of the film. His Sir Wilfrid is brilliant, petulant, warm-hearted and tyrannical, but also truly cares about his clients and is not in the business just for his reputation. As a result,though, of Sir Wilfrid’s prominence, Leonard Vole’s wife (now called Christine and played by Marlene Dietrich) is slightly less the overshadowing figure that she is in the short story and play, but her character remains a highly interesting one, and the one around which the plot still turns.

I don’t want to spoil the ending if you’ve never seen the play or movie, but it is an excellent film. Along with And Then There Were None (1944), it was one of the few movie adaptations of her books that Agatha Christie liked.

Random Note – in the film, the murdered woman’s housekeeper, Janet McKenzie, is played by the inimitable Una O’Connor (The Bride of Frankenstein, The Invisible Man, Christmas in Connecticut, The Bells of St Mary, The Adventures of Robin Hood). O’Connor also played the housekeeper in the play only several years earlier. Since McKenzie seems extremely bitter in the play (though I’ve only read the play, but that is how it seems) and is comedic in the movie, I am extremely curious how she played the role on stage.

Here is a clip of Sir Wilfrid cross-examining Janet McKenzie.