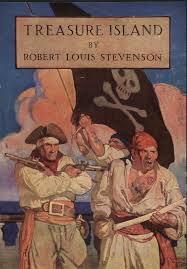 Cover illustrated by N.C. Wyeth for the 1911 edition

After reading The Strange Case of Dr. Jekyll and Mr. Hyde and several other of his short stories, I found that I especially liked the prose of Robert Louis Stevenson. He is a beautifully descriptive writer, but not in a dull or prosy way so that the action suffers; he’s writing is exciting, evocative, with imaginative stories and images you don’t forget. And since I’d never read Treasure Island, I thought that it should be my next Stevenson book. I was curious, because Treasure Island is so often dismissed as children’s literature, if it would have a different tone or if the writing would be different.

It was different, though not in a bad way. Partly, this is because Treasure Island is written in first person from the perspective of a boy who is the son of a landlord whose parents run the Admiral Benbow Inn. His tone is more straightforward than, say, Mr. Utterson in The Strange Case of Dr. Jekyll and Mr. Hyde (which is ironic, since Mr. Utterson is supposed to be a staid lawyer, but there is something so outlandish in Dr. Jekyll’s experiments that it unfailingly elicits the most extraordinary descriptions in response). But Jim Hawkins writes in a much more direct fashion. I don’t recall noticing his prose as much. The story is the most important thing.

Which is as it should be since Stevenson had children – boys – in mind when he wrote his first novel. In his book The Art of Writing, Stevenson says that he had the assistance of his step-son and father in writing the novel and they both gave him many ideas. He tried to write exactly the kind of book a boy would want to read or that he would have wanted to read. There were no women involved, he said.

But though Treasure Island is less gothic and more straighforward, there are still some wonderful moments, like when Long John Silver comes to parley with Captain Smollett and his small band, who have taken refuge in a stockade. He and the captain sit outside and smoke their pipes in silence, waiting for the other to begin while everyone within the stockade is so curious about the scene playing before them and the confrontation that occurs that they’ve left their posts – where they’re supposed to be watching for treachery – and are instead watching the two implacable men in fascination.

And I love this description, that recalls the haunting, vivid quality of The Strange Case of Dr. Jekyll and Mr. Hyde. Jim is thinking about how Captain Flint killed the six men who helped him bury the treasure all those years ago.

…I was haunted by the thought of the tragedy that had once acted on that plateau, when that ungodly buccaneer with the blue face – he who died at Savannah singing and shouting for drink – had there, with his own hand, cut down his six accomplices. This grove, that was now so peaceful, must then have rung with cries, I thought; and even with the thought I could believe I heard it ringing still.

Having seen the 1950 Disney live action version of Treasure Island multiple times (it was a childhood staple), it was interesting to read that Long John Silver is supposed to be blonde, with a face like a “ham.” Sometimes I can picture it and sometimes I can’t. I’ll often see Robert Newton, instead. Another thing I noticed is that in all the movie adaptions I’ve seen of the book, I don’t recall any of them including the scene where Silver tries first to talk a sailor into joining the mutineering pirates and after failing, hurling his crutch at the man so that it breaks his back and then hurling himself on his broken back and ferociously stabbing him to death. If they’d ever included that in a movie, I don’t think the audience would have ever recovered…at least not long enough to hope he gets away.

Long John Silver is less sympathetic in the book. He’s always scheming and playing both sides of the field, and if he can get away with it, perfectly willing to betray anyone. There is not much of that sneaking affection for Jim that redeems Silver in the movies. He is a treacherous buccaneer to his core…just a far more savvy and smart-talking one than your average, run-of-the-mill pirate. He has some education and plans on retiring as a gentlemen after he gets his share of the treasure.

Jim Hawkins is an interesting character, too. He’s really not a very reliable boy. He’s always running off on some whim and abandoning his duty, though somehow it always turns out that his disobedience has saved them. At the end of the book, Captain Smollett acknowledges that Jim has saved their lives, though remarks that he would probably never go to sea with him again. Ironically enough, Treasure Island is a book that seems to reward moral ambivalence. Even Long John Silver gets away at the end, with a bag of gold. And Ben Gunn is also a murderous pirate too; who gets to return home and achieve a degree of celebrity and gold (though he spends his share in a matter of weeks).

In the introduction to my copy of Treasure Island, John Seelye argues that the description of Treasure Island matches that of California, which seemed a unique idea to me. Stevenson had traveled to California and never to the Caribbean, so I guess Stevenson just used his memory of California to describe his famous island? While reading the book, I had to confess that Seelye had a point. There are azalea bushes, nutmeg trees, oaks, pines, sea lions, rattle snakes and even very large trees with red bark that suggest Redwood trees. It’s not very Caribbean in flavor. If ever another movie is made of Treasure Island, they should shoot it in Northern California.

Here is Stevenson’s descriptions of Redwoods.

The third [tree] rose nearly two hundred feet into the air above a clump of underwood; a giant of a vegetable, with a red column as big as a cottage, and a wide shadow around in which a company could have maneuvered.

The treasure is buried beneath this tree.

Posted by christinawehner on April 3, 2015 in Fiction