Ever since watching Vertigo for the first time several weeks ago (my original review can be found here), I knew I wanted to see it again now that I knew the twist. I was especially curious about the first half of the film. I wanted to see what I could pick up since I knew that Madeleine is really Judy, who is playing Madeleine.

This time I watched it with my grandmother, who first saw it when it was released in 1958, just before my mom was born. She’s always loved Alfred Hitchcock’s movies and each year would see his latest film. Vertigo, though, was not her favorite. She found it a bit slow and rather creepy. We had a great time discussing it, though.

What was most interesting is how the focus of the story seemed to change on a second viewing. The first time, it is all about Scottie (James Stewart). We are seeing things as he is seeing them (at least in the first half) and are as confused as he is. Kim Novak’s Madeleine is an enigma to us, aloof, unknowable, almost not of the world (which I think is partially why Scottie is fascinated by her – he is not as attracted to the more down-to-earth Judy). But on a second viewing it suddenly became about her. Now that I knew it was Judy Barton playing Madeleine Elster, I was wondering what she was thinking.

When did she fall in love (as soon as she met him, in his apartment?), was she really unconscious after jumping into San Francisco Bay (that must have been fun – you’d have to pay me a lot of money to deliberately jump into a bay and hope the man following me doesn’t take his time about rescuing me)? How much is she hewing to a script prepared by Gavin Elster? Was that really what the real Madeleine was like, almost other-worldly? When she drove to Scottie’s house to give him a thank-you-note, was that done with the knowledge of Elster or did she just do that because she liked Scottie and wanted to see him again?

I’m thinking that every move she made had to be planned by Elster. He needed Scottie to be there when Madeleine supposedly jumps off the bell tower. Did Elster really plan for Scottie to fall in love? That doesn’t seem like the kind of thing one could plan. But it also doesn’t seem like there was much that Judy did (as Madeleine) that wasn’t calculated, presumably by Elster. On viewing it again, I can’t really think of any moments in the first half where I thought, “ah, that is really Judy coming through.” Perhaps the moment when she is standing on his doorstep and making eyes at Scottie while he reads her letter has a bit of the real Judy, but she stays in character pretty much the entire time. What is genuinely Judy was the emotion.

And I was wondering, did Elster make up his plan as soon as he heard about Scottie in the paper, and how he had acrophobia? If you really think about it, it’s a ridiculous plan, but that’s is not really the point of the film. Hitchcock film’s don’t always make the most logical sense. Vertigo is telling a psychological and human story; it’s all about the characters, not the minutiae of the plot. Hitchcock would never make a mystery writer. 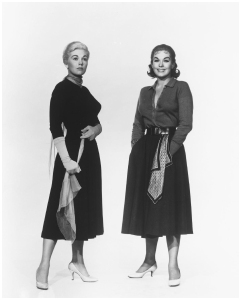 In shifting my viewpoint from Scottie to Judy, it suddenly became her tragedy more than his. She’s the one who gets trapped, first by Elster and then by her love of Scottie. My grandmother and I were musing that you could create a movie series called “Ten Stupid Things Women Do” and choose ten movies to illustrate. I’m sure Vertigo would fit in there somewhere.

And I wonder, was she Gavin Elster’s mistress? Scottie accuses her of it at the end and asks her what Elster gave her after he ditched her. She says money. Is that a tacit confession to his accusations, or does she just mean that she got money for doing her job? How did she ever get involved with Elster and agree to his plan?  As a curious side-note, there is a twisted Pygmalion element to Vertigo. Elster teaching Judy how to be Madeleine must have looked a bit like a darker version of Shaw’s play…and then Scottie tries his hand at it in the second half of the film.

Elster is the real villain, actually a successful villain, who creates an alternate reality that entraps Judy and Scottie and then leaves on his merry way to Europe, having killed his wife. Maybe after Judy dies, the police will figure everything out, though I doubt they’ll ever catch Elster. The authorities are going to be awfully perplexed when another body shows up on the roof of the same mission, dressed in the same clothes and looking exactly like the other women, with the same man present in the tower.

I think that’s partially what I liked about Vertigo. There’s so much scope for imagination. So many films are complete unto themselves, but I like a movie that leaves room for speculation and imagination about the past or future or motivations of the characters. And Vertigo is practically bursting with scope for speculation.

Posted by christinawehner on April 17, 2015 in Drama, Movie Thoughts, Romance