1930s Hollywood had a thing for impoverished royal Russians in exile who were obliged to take menial jobs to earn their living, like being a waiter, a taxi driver, elevator operator or dressmaker. Irene Dunne was the dressmaker in the 1935 musical Roberta and Claudette Colbert and Charles Boyer go into service in the 1937 Tovarich. In Cafe Metropole, a charming and somewhat obscure screwball comedy, the exiled Russian is a waiter.

Set in Paris, a young American named Alexander Brown (Tyrone Power) loses a bet to Monsieur Victor (Adolphe Menjou), the manager of Cafe Metropole. But Victor offers to waive the debt if Alexander will pretend to be a wealthy Russian prince named Alexis. Victor is quite sure the real prince is dead. Alexander is then supposed to woo heiress Laura Ridgeway (Loretta Young), daughter of self-made businessman Joseph Ridgeway (Charles Winninger). The idea, never exactly stated, is to either get money from her father or to marry her without her realizing that he’s not a real prince. Alexander, however, falls in love with Laura for real (something of an occupational hazard in the movies).

What is funny is that the movie doesn’t pretend that Alex’s  Russian accent is anything but atrocious and Victor comments that he hopes Alexander will not meet any Russians. As Alexander explains to Laura, his accent, “it comes and it goes, comes and goes…” She doesn’t seem to mind, however, because he is handsome and rather sweet.

Though, of course, the real prince (played with elan by Gregory Ratoff) is not dead after all. He is a waiter at Cafe Metropole and when he realizes that he is being impersonated he is indignant and storms into Victor’s office. It turns out that Victor used to work for the prince, back in the days of Imperial Russia, but he had not recognized the prince working in his own cafe. Through some rather skillfully ingratiating flattery and obeisance, along with a hefty bribe, Victor manages to pay the prince off (so he can return to the dissipated lifestyle that the prince’s family was noted for). 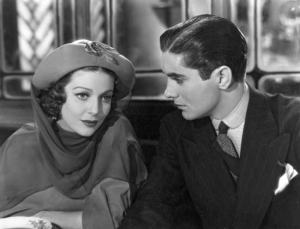 Meanwhile, Laura has determined that she wants to marry Alexander and even proposes to him, though her father is uneasy about the whole thing. Alexander is too nice. All the nice men with titles that he’s previously met turned out to be frauds. The only man who truly had a title was rude. Besides, it seems odd that there should be a Russian prince who actually has money. But Laura doesn’t care if he’s a prince or not. She’s made up her mind to have him and she intends to have him no matter how much Alexander demurs (owing to his guilty conscience).

Cafe Metropole is a somewhat understated screwball comedy. There are no pratfalls, manic action (except a bit at the end with Young) or manic dialogue and the problems people must overcome are not serious. Humor is found in the situations and the tone of the film, the charming way that everyone deports themselves. For example, Alexander and Laura are having a serious conversation while Alexander is buying a hat and they are so absorbed by their conversation and too sophisticated, anyway, to pay attention to the whole serious of ridiculous hats that the clerk tries on Alexander’s head. And Victor is constantly getting himself into trouble, usually financial, and manages to extricate himself always with grace and charm, without ever breaking or sweat or registering rancor.

This was the third movie that Tyrone Power and Loretta Young made together (though the first movie, Ladies in Love, barely counts since he was a side-character, but audiences liked their chemistry, so they made four more movies together). They are one of the most glamorous Hollywood couples you will ever see, beautifully attired (Loretta Young appears in a whole serious of gorgeous, though improbable, dresses by Royer that no woman would wear except in a movie) and have good chemistry together. Tyrone Power only made his film debut the year before and looks extremely young (he was twenty-three) and he doesn’t have much to do, though he does it gracefully. Loretta Young, on the other hand, was twenty-four, but had been making movies since she was around fifteen and had over fifties movies to her credit already. It’s more her film than his. She is the one scheming (she schemes practically as much as con artist Victor) and although Alexander is supposed to be wooing her, it doesn’t take long for it to really be her who is doing the wooing.

Adolphe Menjou is extremely good as the dapper, though slippery, manager who never lets his troubles dampen his suavity. He is even too dapper to be  ungracious when Alexander fails him. Charles Winninger usually plays genial buffoons, but here he is a little more restrained as Laura’s highly skeptical father who doesn’t really trust foreigners. Helen Westley also has a fun role as Laura’s aunt, who has seen too many gangster films. Gregory Ratoff – who wrote the story, though not the screenplay – is hilarious as the hedonistic, down-on-his-luck prince who is insulted by the very thought of someone pretending to be him…who can’t even speak Russian, no less.

Though it’s difficult to pinpoint specific moments of hilarity, the entire package is cute and worth seeing if you like screwball comedy or Tyrone Power and Loretta Young. The DVD is currently only available as part of the Tyrone Power Matinee Idol Collection, which contains 10 of his less-known films.

Posted by christinawehner on May 18, 2015 in Romantic Comedy, Screwball Comedy

One response to “Cafe Metropole (1937) – Tyrone Power and Loretta Young”