William Powell and Carole Lombard in My Man Godfrey

I always feel embarrassed and slightly apologetic when I don’t love a great classic movie. My Man Godfrey? When the subject comes up, I smile sheepishly and fidget. Dare I admit it? I didn’t like My Man Godfrey. I couldn’t take it. Carole Lombard drove me up the wall and for years I was convinced that I did not like screwball comedies. If My Man Godfrey was the quintessence of the screwball comedy, then there was no hope for me. But then I saw The Lady Eve and suddenly the screwball comedy genre opened its arms towards me and I embraced it…though I still don’t particularly like My Man Godrey. I love the actors, but not the movie.

My Man Godfrey also put me off from watching Carole Lombard’s movies and it was not until Hands Across the Table that I realized that she was actually very funny.

I suppose the lesson here is that just because you don’t like the banner title of a genre it does not follow that you won’t like the genre (or the actor) and that is why I am always leery of recommending movies. Sometimes the banner movie can actually scare people away from the genre (or actor). If you don’t like the acknowledged best, why would you like any of the others? My Man Godfrey frequently makes lists as a good movie to introduce non-classic movie lovers to classic movies, but because of my experience I wonder. Does it really appeal to non-classic movie lovers and I am just the exception or would another movie be better to recommend generally?

But people are so idiosyncratic in their tastes. Perhaps it would be better to simply suggest a movie you had fun with, regardless of its actual merit or the importance it had in movie history. I have a theory that the list of important classics has been partly predetermined by TV and what was available for the last fifty years: The Wizard of Oz, It’s a Wonderful Life, etc. My eye doctor told me that he found classic movie acting to be over-the-top, but I wonder what movies form the basis of that assessment. It’s like when people see Douglas Fairbanks in a silent film and assume all silent acting was like him, when he represents one unique style among many.

The way I actually became interested in classic movies was not by targeting specific recommended films, but by picking an actor I liked and watching all their movies I could find: Myrna Loy and William Powell, Barbara Stanwyck, Fred Astaire. As a result, I saw their best films, mediocre films and even some bad films, but it gave me a  sense of the different genres and eras (pre-code, 1930s, WWII movies, 1940s, 1950s, musicals, melodramas, comedies). 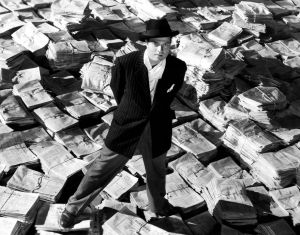 But I still feel embarrassed when I don’t like a great classic. Another secret shame is the fact that I have not yet seen a film directed by Orson Welles that I have enjoyed: The Magnificent Ambersons, The Stranger, Touch of Evil. It’s almost tantamount to admitting intellectual inferiority to say that I didn’t appreciate Welles’ genius. The movies were interesting, well acted and completely failed to engage me emotionally (I enjoyed The Stranger the most, partially because it had Edward G. Robinson and I love him in anything). I haven’t dared watch Citizen Kane. It’s long been hailed as the greatest American movie ever made and what happens to your credibility when you don’t like the greatest movie ever made? It makes you a cultural philistine.

Though there is a vast difference between liking a movie and appreciating or understanding it.

A movie that I have never read a negative review of but can hardly stand to watch is Only Angels Have Wings. It’s not because it’s a bad movie – it’s a very good movie – but it frustrates me at every turn. A greater bunch of immature boy/men it would be impossible to find. And when Cary Grant gets mad at Rita Hayworth because she does not blindly stand by her disgraced husband (because she does not know he’s disgraced because he has not told her, even though she can tell something is wrong by the way the men are treating him) I couldn’t help wondering what he thinks marriage is, anyway. It is not ignorant trust. Women, apparently, are only good for supporting their men while their men figure out their problems in relation to other men and do their manly things while the women sit at home and worry. 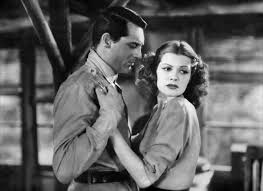 Cary Grant and Rita Hayworth in Only Angels Have Wings

Sometimes, movies just hit on a pet peeve for you and it becomes difficult to overlook the peeve to see the merits of rest of the film. And sometimes movies simply fail to engage you emotionally, the cause of which I find unfathomable. And sometimes, I am willing to overlook everything for the sake of an aspect I really enjoy. I have forgiven many a shaky musical plot for the sake of the dancing I love.

My policy now is to never recommend a movie, but instead talk enthusiastically about all the movies I have been watching. I talk partially because I love old movies and you talk about what you love and also because it gives friends and family the opportunity to decide if a movie sounds interesting to them or not. When I talk about enough movies, eventually something will pique their interest and they want to see it. And when they chose the movie, it gives them the initiative. I don’t have to urge it on them and they are now predisposed to like the movie.

What classic movies do you dislike, even in the face of universal acclaim? Have you ever had any luck recommending movies to others?

Posted by christinawehner on June 12, 2015 in Movie Thoughts