The Wheel Spins (aka The Lady Vanishes) – by Ethel Lina White

It’s funny that there should be Nazis on the cover, since there are actually no Nazis in the book – the Nazis came entirely from Hitchcock’s imagination

One of my favorite ways to find new books to read is to track down the somewhat obscure novels that classic movies are based on. One such is Ethel Lina White’s The Wheel Spins, which Alfred Hitchcock turned into the rather more intriguingly titled, The Lady Vanishes. The Lady Vanishes is a better example of a good film than The Wheel Spins is of a good book, but I surprised myself by thoroughly enjoying it.

Iris Carr is a wealthy heiress on vacation with her friends at an unidentified location – possibly the Balkans, where (according to the book) local aristocracy still holds sway over the local people. But Iris is feeling somewhat disillusioned with her friends and stays behind for a few days. At first it is a relief to be away from all the noise, flattery and petty jealousy, but soon she begins to feel a bit lost without them. She does not speak the language, cannot communicate with the local people when she gets lost in the mountains and generally does not know what to do with herself.

But before she can leave the resort and catch her train, she has an attack of heatstroke and passes out, recovering just barely in time to catch her train. In her compartment, she is surrounded by people who do not apparently speak English, except Miss Froy, a middle-aged governess who has taught children all around Europe and speaks nearly ten languages. Miss Froy befriends Iris – despite Iris’ annoyance at her constant chatter – and helps her while she is still feeling ill. But when Iris falls asleep and wakes up, there is no sign of Miss Froy. Worse, the travelers in her compartment deny that Miss Froy ever existed. The English travelers think Iris is just imagining things, what with the heatstroke and all. But Iris persists in the face of ridicule, dismissal, doubts on her mental health, the language barrier and her own doubts about herself.

What I particularly liked about the book – which does not come out in the movie because Iris has a romantic ally in Michael Redgrave’s Gilbert – is the sense of isolation, disorientation and helplessness that Iris experiences during the train trip. She can’t make herself understood by the train staff, she isn’t taken seriously by the English travelers (partially because many experienced her rudeness and self-absorption at the resort), and is entirely out of her comfort zone. She is used to having other people around to help her negotiate life. There is a contrast (a la  Agatha Christie) of traditional, middle-aged, middle class English values and the values of the new, younger, thoughtless and uninhibited generation. White admires the traditional values, but the irony is that their values are what is keeping them from helping Iris.

Iris is not your typical heroine. She thinks she’s independent and free (because of her wealth), but discovers that taken out of her own crowd, is not as as boldly independent as she thinks. She is vulnerable, and yet she never gives up. She is motivated partially by the conviction that Miss Froy would have done the same for her and partially as an affirmation of her perceptions. She might not be able to trust herself again if it were true she only imagined Miss Froy. 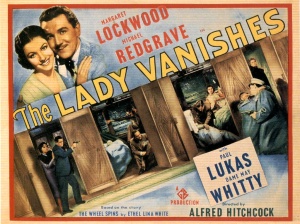 What I also liked about the book is how White deals with some of Iris’ fellow English travelers and their backgrounds and shows how fundamentally principled and kind people unconsciously allow their concerns and prejudices to keep them from really looking into things. This is how people really react in life. People are naturally not inclined to get involved in things that are not their business and are not usually inclined to believe there are fantastic and sinister goings on.

There is a romantic interest for Iris in the book: Maximilian Hare. He likes her, is concerned about her and tries to help her, but still believes that the heatstroke and lack of food and nervous strain have caused her to imagine everything and is not much help in solving anything.

The book is more of a suspense thriller than a mystery. In the first half of the book, it is in doubt whether Miss Froy exists at all and even Iris is led to admit that she might have been hallucinating. But then White makes an unexpected and somewhat jarring decision to take the action away from Iris to England, where Miss Froy’s beloved parents (Miss Froy told Iris a lot about them) are expecting her home soon. This dissipates the suspense and seems a little out of place. However, White soon manages to build up new suspense as Iris realizes that Miss Froy does exist and still cannot get anyone to believe her.

She even figures out where Miss Froy is (as anyone who has seen the movie already knew). Iris is convinced Miss Froy is wrapped up as an accident victim, but cannot summon the courage to remove the bandages, for fear that – should she be wrong – it would kill the victim and land her in jail or an asylum. Once again, a reaction I can readily imagine having. It is ironic that normal human inhibitions are what is keeping Iris from rescuing Miss Froy. It is only, at the end of the book, when finally free of those inhibitions, that she can rescue Miss Froy.

White has a few annoying habits as a writer: she often ends chapters with heavy-handed foreshadowing and the frequent inclusion of Miss Froy’s parents back in England interrupts the tension. It also does not have the humor of Hitchcock’s movie and is not a romance…though that would distract from the story White is telling.

Though I must confess that The Lady Vanishes is not my favorite Hitchcock film, a fact I always find surprising, but may have made easier for me to enjoy the book. Hitchcock added political overtones to the movie and his overall message is that the English bystanders cannot afford to be bystanders while the Nazis do their thing. They must all pitch in and the one Englishman who wants to appease the Nazis gets killed. Iris, in the movie, ends up with quite a bit of help, as a result of this. Even an English woman helping the Nazis has a change of heart because, well…she’s English after all.

Every time I sit down to watch The Lady Vanishes I think I ought to really love it and as soon as they are on the train, I do love it and wonder why I had such a lukewarm reaction before. But the suspense ends too soon for me. As soon as they find Miss Froy, it becomes a shootout and patriotic call to arms and I remember why The Lady Vanishes is not my favorite Hitchcock. The middle is just not long enough for me and the end just too long, I lose me initial enthusiasm.

Of course, now that I’ve read the book, I feel inclined to give the movie another chance.

Posted by christinawehner on July 10, 2015 in Books