Discussing My Fair Lady: The Ending 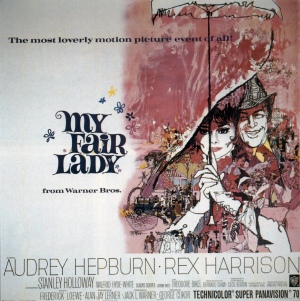 In his introduction to the Penguin edition of George Bernard Shaw’s “Pygmalion, Nicholas Grene calls the ending of the musical “a vulgar travesty of the play’s design.” Vulgar? Good heavens.

I appreciate what Grene is saying, that “the whole point of the play is the independent autonomy which Liza achieves, denying her status as Higgins’ male artifact,” though I disagree that that is Shaw’s whole point. He has a variety of them going on, which confuses things and prevents the play from being divided up into neat points. And there are certainly some issues I have with Shaw’s epilogue to “Pygmalion,” which he wrote later to detail once and for all what happens to Eliza and Henry Higgins so people would stop trying to put a romantic spin on his un-romantic play. However, after some reading of the play, I have concluded that the romantic spin is partially his own fault and that his epilogue is not very satisfactory at all and far too neat (but I want to write about that next week).

Perhaps I am just being defensive, because the truth is, I love the musical and I love the play. It is the musical that brought me to Shaw. I am obsessed with all things “Pygmalion” and I don’t think it’s right having one manifestation played against the next, as if they were in antagonism with each other. But in my mind, complaining that the musical is a travesty of the play is like saying the play is a travesty of Ovid’s Pygmalion account. Shaw has completely changed the meaning and ethos of Ovid’s passage in Metamorphoses. This is not a travesty. It’s genius.

But when people discuss the ending of the musical, they forget that there was a movie made in 1938, produced by Gabriel Pascal, adapted from his own work by George Bernard Shaw and starring Leslie Howard and Wendy Hiller. There had been two previous adaptations of “Pygmalion” into film, a Dutch and German version that Shaw loathed and thought were highly sentimentalized. It was generally thought that the play could never really be turned into a good movie. One, because it is a drawing room comedy of manners and all the action that we associate with the story – the ball, teaching Eliza how to speak and act – occurs offstage. Second, not only did the play not have a happy ending, it did not really have an ending at all. Imagine, for a moment, a movie that ends simply with Eliza walking out of the room. It would be a bit abrupt. 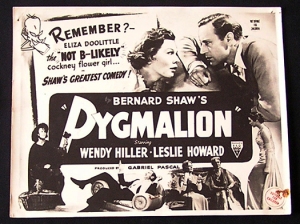 Shaw worked very closely with Pascal on the adaption of his play and ultimately was extremely pleased with it, despite the ending that Pascal managed to slip in without his knowledge. He also opposed the casting of Leslie Howard – he wanted Charles Laughton – because it slanted Higgins towards possible romance (something I don’t think people would have been as inclined to anticipate if Laughton had been in the film). But the film remains remarkably, delightfully literate for a movie and Shaw wrote to Pascal that it was “an all-British film, made by British methods without interference from American script writers, no spurious dialogue, but every word by its author, a revolution in the presentation of drama in the film.” He remained grateful to Pascal for taking many of his plays (including an excellent film adaption of “Major Barbara,” also starring Wendy Hiller) and faithfully doing them justice in a cinematic setting.

But about that ending. In the epilogue to the play, Shaw has Eliza marry Freddy, a man she neither loves nor respects. I suppose he married her off to be cranky and to try to settle her fate so no one else could, even in their imagination, marry her to Higgins. I don’t find it very convincing, however. It seems more likely that she would marry neither man.

But when Lerner and Loewe came together to make a musical, they could not for the life of them figure out how to turn the play into a musical. Oscar Hammerstein II declared that it was impossible. No romance, no chorus, a whole lot of talk. Finally, the solution hit them and they decided to base their musical, not on the play, but on the 1938 film adaption. And indeed, when you watch the 1938 adaption, it is remarkable how similar they are, in dialogue, in action, in events. One almost expects Leslie Howard to break into song. So really, the musical is a very good adaptation of a movie that Shaw approved of. Except the ending, of course.

But I have no real problem with the romantic ending, since it is perfectly internally consistent with the story that the movie and musical are telling. And neither musical nor movie is highly sentimental. In the musical, there are no love duets, the word love is never even mentioned, the characters don’t sit around contemplating their love, since they don’t even realize it. Higgins’ moment of revelation comes at the end, when he sings “I’ve Grown Accustomed to Her Face.” 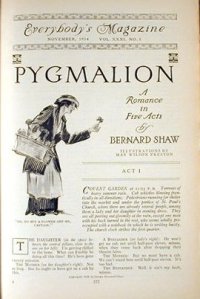 For Alan Jay Lerner (who wrote the book and lyrics of the musical), “My Fair Lady” involves a transformation not just for Eliza, but most fundamentally for Professor Higgins. Eliza’s character doesn’t fundamentally change, but his does. He’s been unconsciously softened by her. In Lerner’s words, “in a far less tangible way, Higgins goes through as much of a transformation as Eliza, the only difference being that Shaw would never allow the transformation to run its natural course.” Shaw’s Higgins remains fixed in character, Lerner and Loewe, and even Pascal, have their Higgins undergo a character arc.

Another reason I think this works is because movies and musicals are fundamentally different from a play. A movie naturally tends towards romance – or at least strong emotional ties – because it is a more intimate art form than a play. And a musical must have some transcendent emotions to express musically, otherwise, why bother writing a musical? The romance is told, the characters change, through the music, not through words. In fact, because of the music of Frederick Loewe, Rex Harrison is able to play Henry Higgins as a far less romantic figure than Leslie Howard, because he has the songs to express his feelings. Howard must do it on his own and is therefore slightly softer than Harrison.

I do, however, have one complaint about the ending of the film version of My Fair Lady, with Rex Harrison and Audrey Hepburn. My complaint mostly rests in the casting of Hepburn. She’s really not bad in the role, but she lacks that fundamental spunk and strong individualism that is found in the play and 1938 movie Eliza. I don’t think this is the fault of the musical, but of Hepburn’s persona. When she goes back to Higgins, it looks like a defeat, desperation on her part to be with him, without his having to change. But I suspect that with Julie Andrews it was different. You can even hear the difference in her singing of “Just You Wait, Enry Iggins” and “Without You” in the Broadway and London cast recordings. Hepburn is overwhelmed by Harrison, but I would have believed Andrews when she said she can do without him. Her return would have signaled a change in their relationship. I don’t have that same sense with Audrey Hepburn.

The Making of My Fair Lady – Keith Garebian

Introduction to the Penguin Edition of “Pygmalion” – Nicholas Grene

Posted by christinawehner on July 24, 2015 in Books, Movies

42 responses to “Discussing My Fair Lady: The Ending”