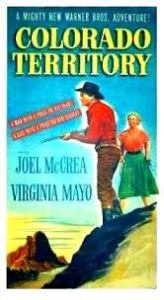 I’ve written the words “I don’t usually like Westerns, but…” so often that I am beginning the rethink my long-stated aversion to the genre. I thought I didn’t like Westerns because when I set out to watch the classics, they never seemed to do anything for me. But there are a few Westerns I do enjoy, often by directors like William Wellman and Raoul Walsh (or sometimes Anthony Mann), though they rarely make anybody’s top ten list. But I really liked Raoul Walsh’s Colorado Territory. It might perhaps be the Western I have most enjoyed (with stiff competition from Winchester ’73).

Colorado Territory was directed by Raoul Walsh in 1949 and is a Western remake of Walsh’s gangster classic High Sierra, from 1941. High Sierra was based on a novel by W.R. Burnett (who also wrote the novel Little Caesar) and is the movie that really boosted Humphrey Bogart’s career and gave him his first good shot at being a leading man. Possibly because of the presence of Bogart, High Sierra remains the most known of the three manifestations of Burnett’s novel (there was a 1955 version with Jack Palance and Shelley Winters), however, I think Colorado Territory is the stronger film.

Wes McQueen (Joel McCrea) is an outlaw who escapes from prison and heads for the Colorado Territory where Rickard (Basil Ruysdael), the man who arranged for his escape, has another job for him to do. Wes is tired of the life and wants to settle down and buy a farm, but he agrees to do this one last job out of gratitude and so he can finance the land he wants to buy. He does not, however, trust the men he will be working with. Duke (James Mitchell) is a young would-be philosopher who thinks he’s smarter than he really is and Reno (John Archer) is a bully without much brains. Also along for the ride is Colorado (Virginia Mayo), a woman who is part Native American with a colorful past who’s been hanging out with Duke and Reno as an alternative to working at the dance hall (code for brothel). They are all hiding together in an abandoned Spanish city and tensions run high, with Duke and Reno fighting over Colorado while she falls for Wes. 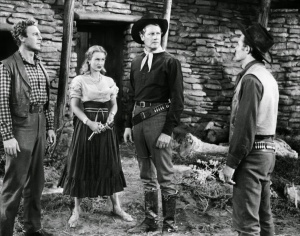 But McQueen doesn’t want her. He wants Julie Ann (Dorothy Malone), who reminds him of the woman he loved and lost (she died). Julie Ann is out west with her father, Fred Winslow (Henry Hull) to start a new life on a ranch. But Julie Ann is not exactly the sweet woman Wes thinks she is. Meanwhile, Duke and Reno are plotting with an ex-detective named Pluthner (Harry Woods) – who also works for Rickard – to kill Wes and make off with all the money they get from the train heist Rickard has planned, though Wes smells a rat (or rats) and is on to them, while Colorado continues to stand by his side through everything.

The train heist is quite exciting – I’ve always had a thing for train heists and trains in general. Put a train in a Western or in any movie, really, and the movie automatically gets a few extra points from me. The scenery is also impressive, with the wide expanses, grand hills and stark mountains where Wes flees at the end.

And in many ways, I think the story of High Sierra works better as a Western instead of a gangster film. One reason is because it is not focused, like High Sierra is, on the end of gangsters as a breed of men, which makes for a more personal focus on Wes and Colorado, their romance, his weariness with running and robbing and his desire to have land of his own, Colorado’s desire to be loved and belong and her utter loyalty to him. Joel McCrea and Virginia Mayo have good chemistry and it’s a more satisfying romance than Bogart and Ida Lupino, as much as I love both actors, but Lupino seemed more like a kid with an extreme case of hero worship. There’s a rightness between McCrea and Mayo, as if the two belong together, even when Wes does not initially realize it.

Spoilers! Joel McCrea almost always played a man of principle, especially in his Westerns. He seemed to radiate integrity, so even when he plays an outlaw, as he does here, somehow you still feel like he’s the most principled man around. It’s hard to root for the men who represent the law. Their just doing their duty, but it’s a rough justice they administer, going as far as lynching Duke and Reno. The Marshal (Morris Ankrum) is a cunning man, though, and a combination of betrayal, greed and just plain good planning by the Marshall and his posse, cause the downfall of Wes McQueen.

The ending I also found to be more satisfying in Colorado Territory than High Sierra. He is driven up into the mountains and makes an epic last stand, but once again the personal touch is more in evidence. He is concerned, while alone in an abandoned Indian city carved into the mountain, of leaving a written confession exonerating Colorado, while she is at the foot of the mountain, trying everything she can to save him, only to have the Marshall use her love for Wes to lay a trap. There is something very fitting in how the two of them end up dying together at the last in a blazing shootout. It’s almost poetic.

The acting is top notch. My first introduction to Virginia Mayo was through comedies with Danny Kaye and Bob Hope, but after seeing her in White Heat (also directed by Raoul Walsh – Mayo said she had her best roles in his movies) and now Colorado Territory, I’ve come to appreciate her more. Dorothy Malone is also good as Julie Ann and I find the idea that Wes would fall for her much more plausible then Bogart’s character falling for the teenage Joan Leslie. The script also feels tighter, more streamlined. Colorado Territory really deserves to be better known for its own sake and not just as a remake.

Posted by christinawehner on September 11, 2015 in Movies