This film is not Leo Tolstoy’s War and Peace, which I knew coming in so I meant to give the film a fair viewing on its own merits and not as an adaptation. But it was harder to do than I thought, especially because I’d just completed the novel. But I gave it my best shot.

Actually, sometimes when a movie tries to follow a book and doesn’t quite make it (whether for scripting or casting reasons) I often wish it would depart even more from the story than it does rather than doggedly follow the main events. An entirely different, internally consistent film (consistent as a film, not consistent with the book) can be more satisfying and I confess, I wish they had changed War and Peace more.

The film chooses to focus on three characters: Natasha Rostov (Audrey Hepburn), Pierre Bezukhov (Henry Fonda), and Prince Andrei (Mel Ferrer, who was married to Audrey Hepburn at the time), which is understandable, though it does turn the film into a love triangle. Other important characters, like Nicholas Rostov (Jeremy Brett) and Princess Mary (Anna-Maria Ferrero) are sidelined, especially Princess Mary. It’s only 208 minutes (a faithful 1972 adaption of War and Peace is 890 minutes) and even with the characters trimmed, my dad commented that it is not easy to keep up with them all. It often felt, he said, like scenes that probably took ten pages (or even chapters) were flying by in 30 seconds.

The film’s biggest issue is its inconsistency and the casting (frequently cited as a problem) contributes to this feeling. It’s like it can’t decide whether to stick with the book or branch out into new territory. Of course, any time you cast big stars (those Hollywood stars with established personas) it nearly always skews the movie in favor of the stars and away from the story.

For example, Audrey Hepburn does not play Natasha Rostov; she plays Audrey Hepburn, though she does so very well, looking like she was born to play Cinderella when she is at her first ball and Prince Andrei is falling in love with her. Henry Fonda is a strange mix of naive indecision (leftover from the book) and decisive hero (left over from Henry Fonda). But his character is at its most convincing when he plays the war-hating, peace-loving, take charge to rescue Natasha’s reputation Pierre, as opposed to the Pierre who naively falls for his cold and shallow cousin, Princess Helene (Enita Ekberg). Mel Ferrer as Prince Andrei is adequate, but seems a bit stiff. 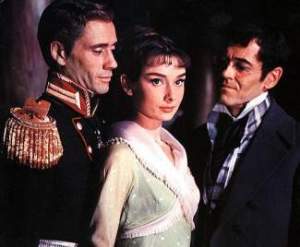 But because the film is focused on its stars – with space saved for Napoleon, who is played plausibly by Herbert Lom (he captures that theatrical, pompous, faintly ridiculous, entirely earnest, and even a bit petulant attitude that Tolstoy gives him in the book) – almost all of Tolstoy’s philosophical and historical opinions are left behind. Pierre does not seem to be spiritually lost or searching, except at the beginning of the film (which I had trouble believing coming from Henry Fonda). Andrei’s trouble seems to be more moodiness than ambition and pride. The notion of living by instinct and accepting one’s place in life is absent. The film is really an old fashioned historical melodrama set during Napoleon’s invasion of Russian in 1812.

But here are some examples of how I think the film could have departed even further from the book. Pierre’s character is inconsistent, which is perhaps best illustrated by his disappearing and reappearing spectacles. The trouble was that director King Vidor wanted Pierre to be played as a more traditional romantic hero without spectacles while Henry Fonda wanted to try to be true to the Pierre of the book as much as possible and wear them. Th result was that whenever the director was near the set, Fonda couldn’t wear them, but he whipped them out whenever Vidor was absent. But Pierre’s character is somewhat like that and I almost wish they had just made him the slightly more romantic hero (still with an emphasis on being a thinker who hates war…not that Pierre is a pacifist in the book, but it works in the film). But the film really seems to not want to be a proper love triangle. It should be more of a straightforward romance between Pierre and Natasha, with Andrei third in the film. We’re just waiting for the two of them to both realize that they love the other and to get untangled from other relationships. I almost wished for more of that and less of the annoying entanglements.

In the film it is clear nearly from the beginning that Natasha and Pierre are right for each other – they already seem to be in love (and to have a real relationship based on friendship and understanding), though it is unacknowledged and unrealized. This is helped by the fact that while Natasha is only thirteen at the beginning of the novel, Audrey Hepburn is clearly not. She seems to be playing someone who is in her late teens.

But all other romances appear to be distractions. Pierre’s infatuation for Helene, even Natasha’s crush on Andrei (it comes off like a crush). Likewise, Natasha’s other crush on Prince Anatole, Helene’s brother (played by Vittorio Gassman). Because one character (a family friend with a forceful personality) is understandably removed from the movie, suddenly Natasha’s elopement must be dealt with more forcefully by her cousin, Sonya (May Britt), and by Pierre. Not only does this show how much Pierre loves her, but that he is already worthy of her. It felt natural that he should act so decisively, however wrong for the Pierre of the novel.

But Sonya also gets to act more maturely in the novel then she does in the book and since we spent considerably more time with her than we ever do with Princess Mary, it seems like the height of injustice that she should not win Nicholas, Natasha’s brother. Instead, Nicholas and Mary’s romance occurs off-screen and Sonya is deprived of the man she loves for no apparent reason other than that they were following the book for the mere sake of following the book.

I’ve complained a lot, but it’s not as bad as all that. The second half is better than the first, when Napoleon invades Russia. The battle where Pierre observes Borodino is well-done and visually compelling. When Pierre is captured, the character of Platon (John Mills) does seem somewhat tacked on. He’s important in the book because he shows Pierre how to live, but he’s wasted in the film because Pierre does not appear to be experiencing an existential crisis. But the portion where the French are retreating from Russia is also extremely well-down. I almost felt sorry for Napoleon.

It’s Hollywood glossy (which for some reason stood out to me more than usual, perhaps simply because I had the book so freshly in mind), with a more British than Russian feel to it. When the Rostov family ride out hunting, they could be fox hunting rather than hunting wolves (as they were doing in the book). But still, there is an inherent grandeur and breadth to the story (how can you lose with Napoleon invading Russia?) that carries the film along.

Posted by christinawehner on November 16, 2015 in Movies