The Lady Eve: The Joke’s On Her 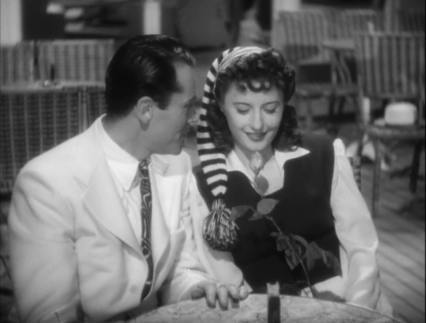 I’ve been thinking about the adage that the best screwball comedies have leads who are roughly equal, able to give-and-take and be worthy opponents: Cary Grant and Irene Dunne, Clarke Gable and Claudette Colbert, Cary Grant and Katharine Hepburn. But my favorite screwball comedy, The Lady Eve, seems to defy that adage as Barbara Stanwyck appears to run all over the hapless Henry Fonda. So why do I love it so much?

I think it’s because everything is not as it seems. Director/writer Preston Sturges has deceived us, because his subtle joke is that the joke’s not on Henry Fonda at all; it’s on her and she’s the only one who’s in on it.

Barbara Stanwyck plays a tough, hard-boiled, unsentimental card sharp who takes advantage of poor suckers and then, like a sap, falls in love herself. She lays down her defenses and is rejected and humiliated. It’s the ultimate humiliation and she loses her self-respect. Because although it looks like she’s always in total control, manipulating Fonda at will, he’s the one who really is in control (though he doesn’t have the faintest idea that he is). She can captivate him, but because she’s so in love, he’s the one who can reject her or accept her.

That’s why she’s so bent on revenge; to regain her own personal self-respect. But she can’t help it; she still loves him. I think it’s that depth of emotion that I like so much about The Lady Eve (besides how hilarious it is). Her sincerity in love makes it clear that if her character doesn’t get her man, we’d be watching a tragedy instead of a comedy. Beneath the cynicism, the battle of the sexes, the ironic jabs at marriage and love and the rich, is a deeply romantic film because of how crazy the two leads are about each other. The Lady Eve has one of the most satisfying endings of any screwball comedy I’ve seen.

So basically, all the pratfalls, the humiliation that Fonda must go through is to make his humiliation equal to hers.

Random Note – in a fit of Sturges enthusiasm I named my cat Lady Eve, but sometimes I think I should have called her Buster. Lady Eve (the cat) has the most perfect stone-face as she watches life go by. She also needs to work on her sultry look.

Posted by christinawehner on January 11, 2016 in Movies