There’s a joke I once heard as a child (paraphrased by me):

The earth had reached a state of perfection where scientists had solved all their problems: war, famine and hunger, global warming, disease – life was now perfect and ideal. So they sent a delegation of scientists to see God and tell him that they no longer required his services. “We can do anything you can do,” they told him. God listened to them politely.

“Name something,” they said. “Name anything and we’ll show you we can do it as well as you.”

“Oh, that’s easy!” one scientist said and bent down to grab a handful of dust. God stopped them. 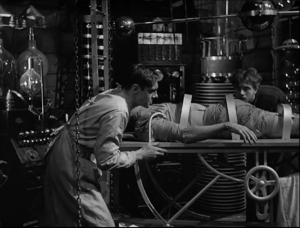 But in all seriousness, as much as Frankenstein movies warn about trespassing on the realm of God (and if you think about it, Frankenstein’s not even in the ballpark), I never found they made a very convincing case. The pertinent message ends up being more about scientific ethics and the nature of humanity. Though, admittedly, Frankenstein does have a colossal god complex.

But if the movies had really been about trespassing on the realm of God, there shouldn’t have been any careless accidents (like using the wrong brain?). There should have been divine retribution (the proverbial zapped by lightning). Either that or it simply shouldn’t have been possible to create life. Interestingly enough, in the 2015 Victor Frankenstein, that is exactly what happens. Victor Frankenstein creates a being that breathes, but it has no soul and Frankenstein concludes that what he has created is not really life – just a carcass with a heart pumping (or hearts, in this case).

But in the Frankenstein films, an unspoken question is asked – what makes someone alive?

In the original 1931 Frankenstein and the 1957 Hammer Studio The Curse of Frankenstein, they do succeed in creating a living human being. Both “monsters,” played by Boris Karloff and Christopher Lee, have damaged brains (caused by careless or bickering scientists and their assistants), but they feel pain, suffering, longing, confusion. But the fact that both “monsters” have damaged brains is something of a side-issue in the films. It wouldn’t have mattered if both of them had been fully functioning, thinking adult creations. Their very appearance and the way in which Frankenstein treats them would have caused problems.

In the original Frankenstein, Colin Clive plays an obsessed scientist – not so much evil as totally consumed by what he is doing. In the 1957 version, Peter Cushing’s Frankenstein is an out-and-out psychopath (like Beauty and the Beast, he’s the real monster in the story). But what they both have in common is a casual attitude towards their creation. In fact, that is part of the problem. They think of the “monster” as their creation – something to experiment upon, study and destroy in a way that wouldn’t be acceptable if their creations were animals. They talk of creating life, but they don’t treat them as life.

Actually, it makes me think, of all things, of George Bernard Shaw’s play “Pygmalion.” Because Henry Higgins thinks he’s created Eliza Doolittle, the perfect lady, he thinks he can control her and treats her as though she had no feelings. Except in the end she asserts her independence and waltzes out. But she has options in life that aren’t exactly available to Frankenstein’s monster.

So, if they’re not really trying to create life, what are they trying to do? Science for self-aggrandizement and fame – like a Greek hero who wants to be remembered after he has died? To exercise control and power? The thrill of discovery and the challenge? Maybe all these reasons and more? Perhaps they (or at least Colin Clive’s Frankenstein) even once wanted to do good.

But the Frankensteins’ treatment of their creations tends to be little better than their treatment of other people (especially in the case of Peter Cushing’s Frankenstein), who are the little people in their personal drama. Oddly enough, the creation of life ends up resulting in the isolation of the creator (I had to get the theme of loneliness in there somehow!) and a lack of sympathy for those already alive. In Frankenstein, creating life ends up a kind of nihilism.

This is my contribution to the Movie Scientist Blogathon, hosted by myself and Silver Screenings. Follow the links for the rest of the entries: Day 1 was devoted to Good Scientists, Day 2 went to the Mad ones, and Today comprises the Lonely ones. 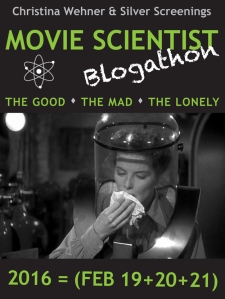 Posted by christinawehner on February 21, 2016 in Movies

10 responses to “Frankenstein vs. God?”