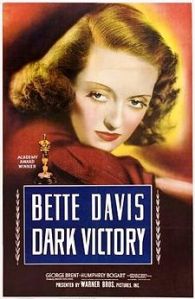 I have had Dark Victory sitting on my shelf for a long time and I have steadfastly resisted watching it. It’s a story about a woman who dies of cancer and since my own mother died of cancer, I thought I’d never have the heart to sit through it all. But last week I must have been feeling reckless (or morbid), because I voluntarily and spontaneous decided to watch it, fully prepared to drown in an ocean of tears.

But the oddest thing happened. I didn’t actually cry and I think it’s because the film bears absolutely no resemblance to my own experiences. It is a pure Hollywood fantasy of disease and death….which isn’t necessarily a bad thing. I don’t need a movie to teach me about grief. Movies either touch me on the raw (and they are only able to do so because I’ve already experience something) or they touch me in a more abstract, cerebral, certainly emotional, but not tangible fashion. Dark Victory was definitely in the latter category. I admired Bette Davis, enjoyed the drama, felt sad by the ending, was frustrated by the character’s decisions and generally was able to enjoy it like I would any other movie.

Judith Traherne (Bette Davis) is a reckless and willful heiress who parties all night and has a huge collection of relatively useless friends, including Alec Hamm (Ronald Reagan, in a thankless role), though her loyal secretory, Ann King (Geraldine Fitzgerald in her first American film) is more like a sister to her and genuinely tries to look out for her interest. But Judith’s doctor is worried about her. Dr. Parsons (Henry Travers) knows something is wrong, though Judith refuses to tell him her symptoms or see another doctor. The symptoms include trouble with her vision, numbness in her left arm and hand, terrible headaches and an inability to concentrate.

Dr. Parson finally does get her to see a specialist, however. Brain surgeon Frederick Steele (George Brent) diagnoses a brain tumor almost immediately, though he consults with a few other doctors before telling her that they need to operate. The operation is a success, clearing up all her symptoms, but the doctors learn that the operation was only a reprieve. Judith only has at most ten months to live. There will be no symptoms (?!), she will appear perfectly fine until she loses her eyesight, at which point the end will only be a few hours away. 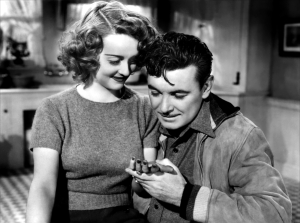 But Dr. Steele, Dr, Parsons and Ann elect not to tell Judith, feeling that she would be happier if she didn’t know (this is apparently rather European, where my piano teacher told me that it used to be quite routine for the family to choose not to tell a loved one that they were dying – the topic came up when we were discussing Rachmaninoff and I expressed surprise that his family should keep it from him that he had cancer, though eventually it becomes rather obvious to the patient that something is wrong – though this was in the days when there was really nothing that could be done). Judith is beside herself with gratitude for Dr. Steele and is falling in love with him, while Dr. Steele returns her affections. Should he tell her? And then things go haywire when Judith finds out that he and Ann lied to her about being cured and goes on a giant, months long bender.

One thing that interested me was Bette Davis’ performance. I am used to thinking of her as playing rather strong-willed women, but as Judith Traherne she plays her with a more childlike innocence, especially opposite George Brent’s Dr. Steele. She mentions that her father drank himself to death and that her mother lives in Paris and so there is a rather fatherly aspect to Dr. Steele’s love of her and her reaction to him. It begins when they first meet in his office. She is scared stiff and wildly resistant to his attempts to question her about her health. But as he gains her confidence, she suddenly relaxes, as if for the first time completely trusting someone else to take care of her. She plays Judith with wide-eyed, abandoned youthfulness that somehow isn’t really jaded yet, but also like a scared animal, shying away from kindness, who can’t quite fathom her fate.

Barbara Stanwyck evidently badly wanted the role or Judith Traherne and even performed the role for Lux Radio Theater, but because she was not associated with any studio, the role went to Bette Davis at Warner Bros. I wonder what her take on the character would have been. She can do many things, but I’m not sure childlike innocence is one of them. I am sure it would have been a good performance, but definitely different. 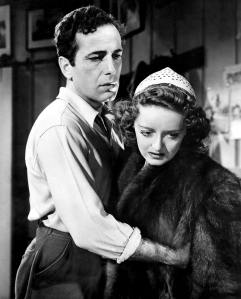 Also in Dark Victory is, of all people, Humphrey Bogart. 1939 was a strange and busy year for Bogart. He played a mobster in The Roaring Twenties, an outlaw in the western (!) Oklahoma Kid with James Cagney, a convict in the prison drama The Invisible Stripes, another mobster in You Can’t Get Away With Murder with the Dead End Kids, a bloodless, undead  zombie scientist with a white streak in his hair and a rabbit to stroke in the very B The Return of Dr. X, yet another gangster in King of the Underworld and an impertinent, lusty Irish stable-hand in Dark Victory with an unconvincing Irish brogue-like accent. Bogart must have been very glad to finally be done with the 1930s.

George Brent and Geraldine Fitzgerald are quite good, but Dark Victory is all Bette Davis vehicle with her nobly going off alone to die. It’s actually a bit frustrating. After all, she is taking the choice away from those who love her who would want to be with her. But in the context of the story, it kind of makes sense. She acts so young and dependent on others, it is important to her, at the end, to do this on her own. Finally, to bravely face something on her own.

As a side note, isn’t it odd the kinds of movies that move one emotionally? It can be so unpredictable. A movie like Dark Victory will leave me unmoved and than I’ll bawl at the end of The Amazing Spider-Man 2. Cheesy stuff, random stuff, who knows what will affect one next! I never know. Do you?

Posted by christinawehner on March 21, 2016 in Movies