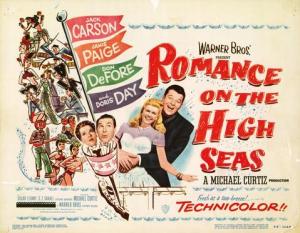 Do you mind if I gush for a moment? Thank you very much.

I am a huge Doris Day fan. I love her warmth and enthusiasm, her can-do attitude and resilience in the face of obstacles (onscreen and off-screen). She could literally do it all: sing (oh, how she could sing), dance, handle comedy and drama. And yet it’s so easy to overlook her outsized talent because she always seems to downplay it.

I’m done gushing. Thank you for your patience.

Romance on the High Seas was Doris Day’s Hollywood debut. She was 23, a successful band singer and at a low point in her personal life. She was so depressed that she didn’t even go out of her way to impress director Michael Curtiz during her audition, bursting into tears at one point (her husband was leaving her because he could tell she was going to be a star and didn’t want to be “Mr. Doris Day”). But according to lyricist Sammy Cahn, ” On the day they screened the tests, first came Marion Hutton (Betty Hutton’s sister); she was not earth shaking. Then came Janis Paige–by comparison, excellent. Then came Doris Day–and the projection room, when they ran the film, exploded.” Doris Day was cast and rapidly became Warner Bros’ top star, though they continued to give her inferior vehicles to star in.

Romance on the High Seas is something of a musical/screwball comedy. Because this was Doris Day’s first film, she is only third-billed and shares screen time with Jack Carson, Janis Paige and Don DeFore, not to mention a host of scene-stealing character actors including Oscar Levant, S.Z. Sakall, Eric Blore and Franklin Pangborn.

Society lady Elvira Kent (Janis Paige) is happily married to wealthy Michael Kent (Don DeFore), or she would be if she wasn’t convinced that he is chronically cheating on her. But her suspicions are unfounded; he’s mad about Elvira, though equally convinced that she’s cheating on him. When Michael is unable to accompany Elvira on a cruise because of a business merger, she immediately suspects him and decides to stay in New York to keep an eye on him, while hiring someone else to go on the cruise in her place to allay her husband’s suspicions.

The woman she hires is struggling singer Georgia Garrett (Doris Day), who works in a dinky little cafe with pianist and would-be lover Oscar Farrar (Oscar Levant, playing himself), who proposes marriage to her by the hour. Georgia is thrilled at the prospect of taking a cruise and promptly quits her job. But Michael Kent is suspicions that his wife is happily be taking a cruise without him and he hires private investigator Peter Virgil (Jack Carson) to keep an eye on her during the cruise. But when Peter meets Georgia – believing her to be Mrs. Elvira Kent – he has to struggle awfully hard not to make love to her.

It gets more complicated when Oscar joins them on the cruise, but things really get out of hand when Elvira and Michael also join them at the end of the cruise in Rio, along with their Uncle Lazlo (S.Z. Sakall), who is trying to sort everything out.

Admittedly, it’s not The Awful Truth or Singin’ In the Rain, but there is a lot to enjoy. In Doris Day’s debut, she is not quite the Doris Day we know from later films. She is super perky (perhaps a bit too perky; she obviously learned to tone it down) and plays what would have been termed a hepcat, tossing slang around even when she supposed to be acting like the dignified Elvira Kent. Doris Day always hated the costumes, makeup and hair of her Warner Bros. days. She felt it was phony and she has a point there. The hats are pretty extraordinary in the film, too. Janis Paige as Elvira Kent has one that looks like a flying saucer landed on her head.

I watched this film with my friend Andrea and she thought the film could be understood as being about perceptions and how people see things (often incorrectly). Because Elvira and Michael believe the other is a flirt, they interpret everything in a way that supports their belief, even when it’s not true. Likewise, Peter Virgil believes that Georgia is Mrs. Elvira Kent, even though there are quite a few things Georgia says and does that should have tipped him off. Likewise, the scene where Peter and Oscar manage to get drunk on nothing has to do with perceptions. They think they are drinking shot after shot, not realizing that a man is stealing their drinks before they have a chance to down the glass. They are too busy telling the other about their girl (not knowing they are both talking about Georgia). Even the song “The Tourist Trade,” which is sung by a man from Havana about how everything they do is for the tourists, makes a similar point about expectations. They don’t actually live this way; they just put on the show that the tourists are expecting.

One thing I enjoy about Romance on the High Seas is that it gives Jack Carson an opportunity to play a romantic lead. He even sings a song – in a fake Trinidad accent – and he’s actually rather endearing. He still has his usual sense of humor, but it’s fun to see him get the girl for a change. Oscar Levant, on the other hand, is his usual misanthropic self, which is either good or bad, depending on how much you enjoy his particular brand of wit, which I do.

Janis Paige and Don DeFore are adequate, but the S.Z. Sakall is his usual adorable self and Eric Blore and Franklin Pangborn both make delightful appearances. Fortunio Bonanova (who pops up in all sorts of unexpected films: Double Indemnity, For Whom the Bells Toll, The Black Swan, Citizen Kane, Kiss Me Deadly) plays the manager of the hotel in Rio who would like to hire Georgia to sing, believing her to be a society lady with name recognition.

The songs were written by Sammy Cahn (lyricist) and Jule Styne (music). “It’s Magic” was the hit of the film, nominated for Best Song (it lost to “Buttons and Bows”) and become forever associated with Doris Day. That is where Doris Day shines most of all in Romance on the High Seas. No one sings a ballad quite like she does. Like Judy Garland, she can bring emotion through a song that is often greater than the film even requires.

Doris Day sings “Put ‘Em in a Box” to express her disgruntlement with Jack Carson’s Peter Virgil, who is too principled to make love to married woman.

Posted by christinawehner on May 6, 2016 in Movies