Despite only appearing in operettas, Jeanette MacDonald could seemingly do it all and the more I see her films, the more awed I am. I recently watched three of her films and I couldn’t decide which one to review, so I thought I’d review them all in miniature. The reviews are in the order that I saw them, rather than the order of their release. 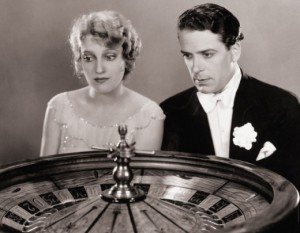 You can tell that director Ernst Lubitsch is still feeling his way from the silent film medium to sound, though his films still feel less static than other directors in 1930. But some scenes linger too long instead of moving forward with greater rhythm. The story is an operetta adaptation of Booth Tarkington’s novel Monsieur Beaucaire, about a prince pretending to be a hairdresser. Jack Buchanan is the wealthy count/hairdresser, Count Rudolph Falliere. Jeanette MacDonald is the flighty, impoverished runaway bride who hires him.

The film opens with an extremely funny sequence involving the preparations for a wedding (in the rain) between Countess Helene Mara (MacDonald) and the wealthy Prince Otto von Liebenheim (Claud Allister). It’s a scene that could have been done in the silent era, as the stage is set for the wedding, servants run hither and yon, and we learn that the bride has run away, leaving an empty wedding dress on a chair

We next see Countess Helene running to catch a train with nothing on but a slip and a fur coat, which greatly surprises the conductor (silent comedian Billy Bevan). She then launches into “Beyond the Blue Horizon,” a song that became a hit for her. The song was much noted at the time for how Lubitsch staged it, with the song sung in time to the train as people watch the train pass…creating a more dynamic musical experience than was usual at the time.

But after the infatuated Rudy passes himself off as a hairdresser, the film begins to drag. ZaSu Pitts as Jeanette MacDonald’s maid seems slightly underused for comedic affect and there are simply too many songs and not enough plot. It seems like every five minutes either MacDonald or Buchanan launches into a song.

Jack Buchanan was a British musical comedy star who is best remembered as Jeffrey Cordova in The Band Wagon, but his rather nasal voice isn’t suited for these kind of romantic songs. The ending, however, picks up again as the countess, Rudy and the prince all go to the opera, which just happens to be an adaptation of Monsieur Beaucaire. Ultimately, what was most fun was seeing Jeanette MacDonald play a spoiled, flighty young woman who seems to change her mind quite frequently, but nevertheless remains adorable. 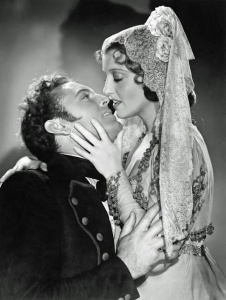 After making a few successful movies with Nelson Eddy, Jeanette MacDonald wanted a change of leading man. She ended up with Allan Jones, who’s most prominent roles came in Show Boat and A Night at the Opera.

The Firefly is nearly a great movie that does everything right until the end, which makes it all the more frustrating. It was based on an operetta by Rudolph Friml, but was completely re-written save the songs. The setting was changed to Spain during the Napoleonic Wars (to reflect the current Spanish Civil War). Nina Maria (MacDonald) is a singer and dancer, who is also a spy for Spain. She seduces French officers and learns what she can. However, while on a mission she falls in love with the persistent and apparently harmless and aimless Don Diego (Jones), until she discovers that he’s a spy for France.

It’s a remarkable showcase for Jeanette MacDonald. She sings, she dances (she studied Spanish dance before filming), she’s funny, she’s dramatic and dedicated and consistently outwits everyone in sight, except for that little indiscretion of falling in love.

What’s frustrating is that the film insists on a happy ending, which doesn’t make any sense in the context of all that came before. The film may begin humorously, but ultimately it goes in a more dramatic direction. Not to mention the heavy-handed montages near the end meant to evoke parallels between Napoleon and Franco, complete with peasant uprisings and the image of chains falling off when the Spanish win. The film could have been at least 15-20 minutes shorter.

However, there is still much to like about the film. The gowns are by Adrian and as always in an Adrian designed costume drama, it is delightful to behold. Warren William, Douglas Dumbrille, Henry Daniell and George Zucco also appear to good effect.

The Love Parade marked the screen debut of Jeanette MacDonald. Ernst Lubitsch saw an old screen test and hired her. The two remained friends his whole life. The film also launched her as “the lingerie queen.”

Maurice Chevalier is Count Alfred Renaud, military attache in France from the fictional kingdom of Sylvania. After multiple indiscretions involving multiple women, he is sent home to face the queen (MacDonald). As soon as she sees him (and reads the report on his exploits) she decides she must have him and they marry. However, he soon grows frustrated with his role as the Prince Consort subservient to the queen.

The majority of the film is quite delightfully whimsical and ironic. It is playing on the idea that he is like the queen’s wife. He is an an adornment who is to provide the queen with an heir. Even the wedding vows are reversed, with him having to promise to obey and be “docile” while she is the one condescending to marry him and raise him up to her station. However, the ending becomes frustrating as he insists on his rights as a man and husband. It’s all played for comedy, but he essentially effects a coup and usurps her throne. She can’t do without him, so she yields her authority. This is precisely the reason Queen Elizabeth I never married!

Once again, it is fascinating to see Lubitsch transition between silent and sound films. He especially makes dynamic use of sound effects and music in The Love Parade (more so than Monte Carlo). It is extremely rare to hear non-diegetic music in early talkies (music that does not occur “naturally” in the scene, like an orchestra or phonograph) but considerably enlivens the film. Compared to Broadway Melody of 1929, the film feels fluid and non-stagy.

However, I can see why Lubitsch quickly moved away from operettas. I generally love musicals, even when the songs or dances stop the action, but in a Lubitsch film, the songs really do get in the way of his story and are often unnecessary, with the exception of songs like “Beyond the Blue Horizon” or “Let’s Be Common,” which is sung in The Love Parade by Lupino Lane and Lillian Roth about how they don’t have to live like the aristocrats when they marry, with separate rooms and the inability to have a good scrap and let some steam off.

The film includes several silent stars, including comedians Lupino Lane and Ben Turpin, who has a cameo that makes use of his trademark cross-eyed stare. Eugene Pallette also appears in an early talky role, showcasing his voice that is, in the words of the Self-Styled Siren, like putting “a double bass through a cement mixer.”

Posted by christinawehner on July 8, 2016 in Movies, Uncategorized