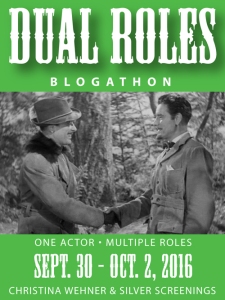 There is something particularly riveting about watching a film where an actor plays more than one role. Ronald Colman in The Prisoner of Zenda, Hayley Mills in The Parent Trap, Michael J. Fox in the three Back to the Future films. Even Ginger Rogers in The Major and the Minor.

It is that combination of technical know-how, make-up, and the sheer skill of an individual actor that produces the peculiar exhilaration one can feel. Cinema is, after all, about role playing and the illusion of reality, an image of reality. What can typify this more than the concept of dual or multiple roles?

In that spirit, Ruth of Silver Screenings and I are so excited to announce the Dual Roles Blogathon: One Actor ~ Multiple Roles.

Rules – Duplicate posts on the same film are most welcome (it seems fitting for a blogathon dedicated to duplication and multiplication). Any film from any time, from the silent era to the present, are welcome. We are not, however, including TV episodes.

To sign-up, simply fill out the form below. Then take a banner – found below – and help us promote the Dual Roles Blogathon! We’re so looking forward to reading everyone’s contributions! If you have any questions, please feel free to contact me or Ruth at Silver Screenings.

The complete roster can also be seen, here. 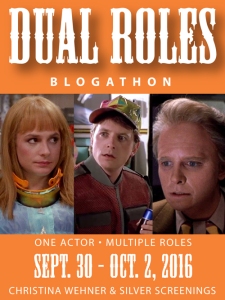 Posted by christinawehner on July 20, 2016 in Movies