The Joy of Discovering Buster Keaton 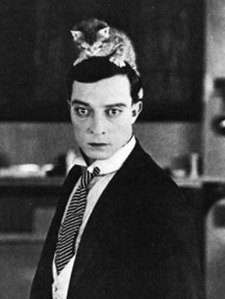 It’s been 100 years since Buster Keaton first began making movies. And to think that much of my life I had never even heard of him. I’d heard of Charlie Chaplin, but never Buster Keaton.

I actually first discovered Buster Keaton while reading One Summer: America, 1927 by Bill Bryson. He wrote about a lot of different things, like Charles Lindbergh and the original murder that inspired James M. Cain to write both The Postman Always Rings Twice and Double Indemnity. But what really stood out to me was his description of a movie called Steamboat Bill, Jr. and a house that falls on the actor in such a way that the window goes over him while he stands.

It sounded impressive. No stuntmen, either. I had to see it.

Discovering Buster Keaton was like discovering a composer that one has never heard of before, but turns out to be as brilliant as Mozart.

And one of the wonderful things about discovering Buster Keaton has been sharing that discovery with other people. I began by showing a short video to my preteen cousin about Keaton’s comedy. He thought it was cool and wanted to see more, so we watched “Cops.” He wanted more, so next we watched “The Scarecrow.” Later, we saw The General and The Navigator. Other visitors to the house have seen Steamboat Bill, Jr. and in a class I am teaching on the history of American film, Buster Keaton has been a universal hit among my teenage students. I have not yet come across someone who was not surprised and delighted by Buster Keaton.

What is the appeal? Buster Keaton has by far been the easiest sell in terms of convincing people to watch silent films. He seems to take people by surprise at how fresh his work is.

I wonder if partly – in this age of sophisticated technology, CGI, highly developed stunt work, and a bonanza of action in films, noise, yelling and introspective heroes – if he is not a profound relief to us, as well as a revelation at what can be done simply with imagination and an extraordinary physical ability. And at a time of constant multi-tasking (especially through our cell phones and social media) there is something relaxing about watching someone fully absorbed by one task at a time. 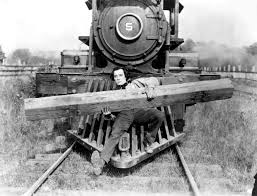 There is concentration in his stunts – it’s not overwhelming, with a dozen things going on at once. One watches, spellbound, as he sits on the nose of a train and uses a railroad tie to clear another railroad tie from the train track. There is nothing else to distract us. We are focused intently on him, his hand gestures, his stunts, his stoic face, as he is totally focused on the task at hand.

He’s a stoic Sir Galahad in a pork pie hat. Nothing phases him – even the most extraordinary ill-luck. He just keeps working at whatever task he has, trying to rescue the woman he loves or save his father from a hurricane or go under water to fix a broken ship that has run aground near an island filled with cannibals.

And his work evokes awe. I don’t think I laugh as much during his films as I do some others, but I smile all the way through, with a mixture of wonder, respect, and delight…always waiting to see what he will come up with next.

In short, his stoicism (he never stops to feel sorry for himself), he athleticism and complete control over all his movements (on par with the control of a ballet dancer), his dedication in the face of all obstacles, his invention in the face of all obstacles – he is inspiring and refreshing. And funny. Not only was it a joy to discover him, it has been a constant joy to watch others discover him.

I’ve shared this before, but it is such a great video, I wanted to share it again. It is called “Buster Keaton – The Art of the Gag.”

This post was written as part of the “The Third Annual Buster Keaton Blogathon.” Thanks so much to Silent-Ology for hosting!! Be sure to click here for many more posts celebrating Buster Keaton. 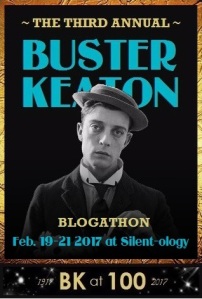 Posted by christinawehner on February 21, 2017 in Movies

33 responses to “The Joy of Discovering Buster Keaton”