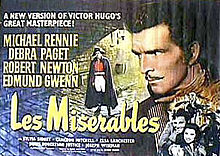 It’s a testament to the inherent power of Victor Hugo’s story that even in a lesser film adaptation of Les Miserables, something of that power comes through. The 1952 adaption by 20th Century Fox is definitely a lesser adaptation, but there is something about that story of a convict hunted by the law and struggling to do right that never fails to uplift: redemption, mercy vs. the law, love, suffering, persecution, and revolution – good stuff.

The story occurs during the reign of Louis XVIII, who was restored to the throne after the overthrow of Napoleon, and Louis-Philippe. The convict and fugitive, Jean Valjean, is portrayed by Michael Rennie, fresh off his success as Klaatu in The Day The Earth Stood Still. His nemesis, Inspector Javert, is played by Robert Newton (who ineluctably made me think of a pirate). Sylvia Sidney appears as the doomed prostitute, Fantine, and her daughter, Cosette, is played by Debra Paget. Cameron Mitchell is Cosette’s love interest, Marius. The Thenadiers are entirely eliminated from the film, along with their daughter, Eponine. The good bishop who shows mercy to Valjean is Edmund Gwenn (of Kris Kringle fame).

Adapting Les Miserables is always a challenge, though it certainly hasn’t stopped anyone. There are numerous adaptations. Characters and subplots have to be cut. The key seems to be creating a thread that holds it all together and keeps the film from turning into episodic snapshots. For the musical, the central thread can best be summed up in the song “Do You Hear the People Sing” – “will you join in our crusade/who will be strong and stand with me/somewhere beyond the barricade/is there a world you want to see.”

In the excellent 1935 film – starring Fredric March and Charles Laughton – all other characters fade and the film becomes a deeply felt conflict between the two men, who represent mercy and the law respectively. Their interactions crackle with tension and Charles Laughton in particular is compelling as Javert. 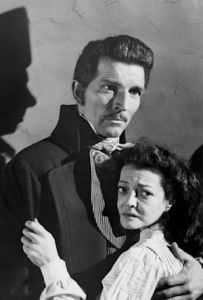 That central tension is missing in the ’52 adaptation and the film becomes somewhat episodic and aimless. There isn’t a central focus. Part of the problem is the script and the other part is the cast. Robert Newton is a marvelous Long John Silvers and a marvelous Bill Sykes, but as Javert, he lacks the kind of concentrated intensity and conviction to make one believe that he would kill himself because of an inability to reconcile mercy with justice. As my sister put it, it’s like he chases Valjean into the sewers because he’s personally affronted that a convict would show him pity.

Michael Rennie himself looks rather dashing, occasionally reminding me of Douglas Fairbanks Jr. in his voice and manner. He seems a bit young to be Jean Valjean. The years of suffering and conviction are missing. Which might explain why the last bit of the film turns into a kind of love triangle between him, Marius, and his ward, Cosette.

Debra Paget as Cosette by far gets the most to do of any Cosette I have ever seen. Cosette is usually overshadowed by Fantine, by Eponine. She often comes off more like a plot device, a motivation for nearly every character, rather than an actual character herself. However, in this version she is more integrated (somewhat at the expense of Javert). She knows the history of Valjean. She seems to have more freedom of movement, more agency (deciding whether to stay with Marius or go to England with Valjean). But the film plays around with the idea that Valjean loves Cosette and Marius certainly believes it, thinking Valjean is using Cosette’s gratitude to keep her near him. It’s an odd twist for the story to take, pushing it into soap opera territory.

On the whole, it is an underwhelming Les Miserables, but as I said, some of that inherent grandeur remains. It’s just such a great story. The confrontation between Javert and Valjean over the sickbed of Fantine. The chase in the sewer. The slaughter of the revolutionaries. The forgiveness and grace of the bishop towards Valjean. Javert’s suicide. Valjean confessing that he is the convict to a court about to condemn an innocent man. These are the moments that make it into every single adaptation and never lose their impact, though that impact varies. If you have to see only one Les Miserables, however, I would recommend the 1935 version with March and Laughton.

Posted by christinawehner on March 14, 2017 in Movies