The Revenge of Frankenstein (1958)

In the various cinematic incarnations of Mary Shelley’s novel, Dr. Frankenstein’s record for creating life is one of overall failure, for one reason or another. He fails spectacularly, wreaking havoc both on society and the pathetic monsters that he creates. The 1958 Hammer Horror film, The Revenge of Frankenstein, stands out as something of an anomaly, however. Frankenstein actually succeeds in his experiments, only not in the way one expects.

The Revenge of Frankenstein is actually a sequel to The Curse of Frankenstein (starring Peter Cushing and Christopher Lee), though it is not necessary to have seen the original to enjoy the sequel. In Curse, Baron Frankenstein is played by Peter Cushing as an out-and-out psychopath and the film ends with him being executed for his crimes. Revenge opens with Baron Frankenstein (still played by Cushing) about to be executed. He is saved, however, at the last minute, by Karl, a man with a hunched back and paralyzed arm and leg.

Years pass and the action moves to Carlsbruck, where Baron Frankenstein lives as Dr. Stein and has a flourishing practice, much to the dismay of his fellow doctors whose business he has attracted. He has both rich patients with imaginary illnesses and poor patients, who he treats at a pauper’s hospital. One doctor, Dr. Hans Kleve (Francis Matthews) recognizes Dr. Stein as Baron Frankenstein and blackmails him into allowing him to become his assistant. Frankenstein is not unwilling to have a new assistant, however (thus avoiding the classic movie scientist mistake of working alone), and shows Hans his life’s work.

He has figured out how to put a body together from scraps of human anatomy, but has discovered that the only way to animate the body is to insert a living brain. Thus Karl is willing to allow Frankenstein to insert his brain into a new and better body, with the eager assistance of Dr. Kleve.

(Spoilers contained in final analysis) The plot in The Revenge of Dr. Frankenstein definitely took me by surprise. Cushing’s second incarnation of Frankenstein is a little less overtly psychopathic, but nevertheless still obsessively driven. As in the original The Curse of Frankenstein, the true monster is him. Karl is simply a victim.

Karl’s body is successfully transferred into a new and better body (played movingly by Michael Gwynn, who nicely plays a conscious that feels alien to the body he is now in) and at first I was disappointed when a simple blow to the head renders Karl the presumed monster of the film, terrorizing the city. But it soon becomes clear that Karl is simply a tragic accident in Frankenstein’s unstoppable quest to create life. It brings up the question of what life is. What sets Karl off initially is his fear that Frankenstein is going to display both him and Karl’s previous body as scientific proof of his achievements and Karl poignantly protests that he’s always been an object people stare. He doesn’t want to be a figure of study again. He only wants to live his life. 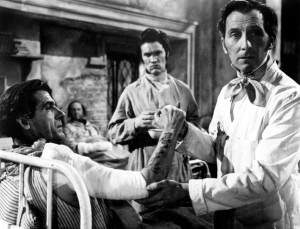 But it brings up the interesting question of Frankenstein’s desire to create life. Does he really wish to create life? Since to create life is presumably to create a living, autonomous being. If one truly creates life, then isn’t one obligated to let that new life free? Frankenstein’s plan to put Karl on show, to essentially possess him, is a denial of Karl’s life. One of the fascinating themes of many Frankenstein films is the sense of ownership and possession that Frankenstein feels towards his creation (or subsequent rejection of them).

Frankenstein repeatedly demonstrates a lack of respect for life, even animal life. He transfers lizard brains into frogs, frog brains into lizards, orangutan brain’s into chimpanzees. Unlike the other snooty doctors of the city, he treats the poor, but it turns out that he does so partly to obtain body parts to create new bodies to house fresh brains.

(Big spoiler)The ending in particular took me by surprise. With seven minutes to go in the film, Frankenstein is beaten nearly to death by angry patients whose body parts he as collected for his experiments. They kill his body, but Hans has learned from the master and, much to my surprise, is able to place Frankenstein’s brain into the second body that Frankenstein had cobbled together from the patient’s body parts (a rather macabre reflection that seems to bother Frankenstein not at all).

The new body is really just played by Peter Cushing, looking rather more piratical with mustache and tattoo on his right arm (taken from a pickpocket), but apparently healthy and determined to continue his experiments, apparently fully vindicated in his work. He just can’t show anyone what he has achieved. It rather took my breath away. The monster lives. And he has learned nothing from his previous experiments.

This has been my contribution to “The Great Hammer-Amicus Blogathon.” Many thanks to Cinematic Catharsis and Reekweegiemidget for hosting! To read the rest of the posts, click here for Days 1, 2, and 3. 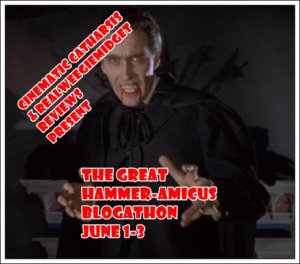 Posted by christinawehner on June 4, 2018 in Movies