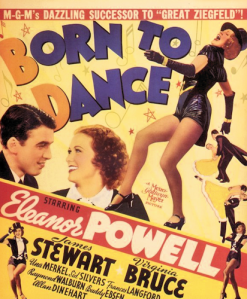 My admittedly limited experience with Eleanor Powell musicals from MGM is that they are a mishmash of music, comedic routines, dancing numbers, general extravaganza and a dash of plot just to keep things interesting. Born to Dance, made in 1936 with songs by Cole Porter, is fairly typical of the genre. It was the second movie Eleanor Powell made with MGM and her first starring role, with her name above the title, even.

Eleanor Powell is possibly one of the finest tap dancers to appear in any Hollywood musical, ranking up there with Gene Kelly and Fred Astaire in sheer skill, though perhaps less adept as an actress. However, like Kelly and and Astaire, she did all her own choreography. As much as I enjoy her dancing, however, I’ve found that since she can’t be dancing all the time, my enjoyment of an Eleanor Powell vehicle depends somewhat on who the side characters are and the cast in Born to Dance is quite good: James Stewart, Una Merkel, Buddy Ebsen, Virginia Bruce, Sid Silvers.

Eleanor Powell is Nora Paige, who’s come to the city to find work as a dancer. She stumbles upon the Lonely Hearts Club, run by Jenny Saks (Una Merkel) who feels sympathy for a fellow female struggling in the big city and lets her stay…if she’ll do a dance or two. Also arrivning in New York City is a submarine with sailors Ted Barker (James Stewart), Mush Tracy (Buddy Ebsen) and Gunny Saks (Sid SIlvers), who’s married to Jenny Saks but hasn’t seen her for four years since he’s been in the navy and doesn’t know that Jenny has had his child. 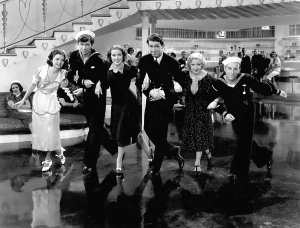 All three men come to the Lonely Hearts Club and romances generally ensue, though Jenny doesn’t tell Gunny about his child yet because she is still not really sure if she wants to take him back after a four year absence. Ted and Nora fall in love, but complications come into their life in the shape of a Broadway star named Lucy James (Virginia Bruce), who sets her sights on Ted. And of course, Nora gets a job as Lucy’s understudy and one can see where this is going.

Having just seen James Stewart in Vertigo, I can’t think of a more different film than Born to Dance. Cole Porter chose Stewart for the role. He’d never been a leading man in an MGM film before – he wouldn’t be a star until Frank Capra’s 1938 You Can’t Take it With You –  and Porter thought that he could play the role well. And although Eleanor Powell’s voice was dubbed, surprisingly, Stewart does his own singing in the film and even introduces the great standard “Easy to Love.” He has a pleasant enough voice, though somewhat inadequate for Porter’s song. He can’t exactly dance, either, but at least he’s enthusiastic and good-humored in his attempts. Still, it was rather fun to see him at the beginning of his career in a genre that you don’t usually see him in. 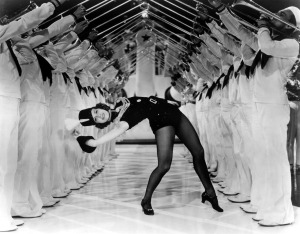 The movie introduced two songs that would go on to be standards in The Great American Songbook: “Easy to Love” and “I’ve Got You Under My Skin,” and also other catchy ones like “Hey, Babe, Hey.” It seems that Cole Porter not only wrote the songs, but also the score for the film, though there were other people around to orchestrate and and arrange. The 1930s was an extremely fruitful decade for Porter, where many of his greatest songs were written.

The dancing and the songs are where the movie really shines. The plot’s a bit corny, but it’s never dull. And if you like dancing and songs, this is a good film to find it in.

And a clip of Eleanor Powell dancing. She is still the understudy at this point, but one can tell she won’t be for long.

And James Stewart introduces “Easy to Love.” Cole Porter said, “…Stewart came over to the house and I heard him sing. He sings far from well, although he has nice notes in his voice, but he could play the part perfectly.”

And Frank Sinatra singing “I’ve Got You Under My Skin.” which was introduced in the film by Virginia Bruce, who sang it to Jimmy Stewart

Why Are Songs About Spring So Sad? 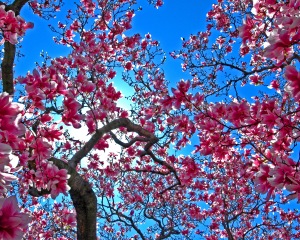 Today is the first day of spring, a wonderful day of new life and new growth. So, I thought what could be better than to celebrate this day of new life and new growth than to find some songs about spring. I thought there would be some joyous songs, expressing new love or how lovely nature is or something similarly upbeat. What I found instead was an impressive barrage of downbeat songs about loneliness and heartbreak. Who knew that spring could bring out more misanthropes than Christmas?

Here is a song by Richard Rodgers and Lorenz Hart, called “Spring is Here,” which sounds like a nice sentiment, until you realize that they are writing about how spring may be here, but they don’t notice because they are all alone. I really like this version, sung by Frank Sinatra. I generally prefer his earlier stuff to his later work; he seems to get too slick in his performance later, but has a touching pathos early on.

And here is another lovely, lonely, heartbreaking song called “Spring Will Be A Little Late This Year,” by Frank Loesser (“Guys and Dolls,” “How to Succeed in Business Without Really Trying”). It is sung by the great Sarah Vaughan. This song details how the singer has been left by their love, so now spring isn’t coming, or is coming more slowly.

Now this song is trying to have it both ways, though on the whole it is a more positive song. “April Showers,” made famous by Al Jolson, though sung here by Sinatra. Apparently, April sucks, but at least the second half of spring gets better. The rain and troubles bring flowers in May. I think it is significant that this song was written in 1921. There was a depression going during 1920-1921, to be followed by a relatively quick bounce back and the roaring twenties.

If you go to youtube and type in Ella Fitzgerald and spring, about a half dozen songs come up: “Spring Is Here,” “Spring Can Really Hang You Up the Most,” “I’ve Got the Spring Fever Blues.” I was wondering if “It Might as Well be Spring,” from Rodgers and Hammerstein’s State Fair should count as a spring song. It’s not technically about spring. The singer is in love and all in a flutter and restless and that “it might as well be spring,” but it’s not actually spring, though at least the singer is in a relatively happy state and new love is being born, which is a sentiment consonant with new birth in spring.

Finally, I did manage to locate one genuine happy springtime song, meant to be sung specifically during spring (though it is not a Jazz standard or standard of The Great American Songbook). It is from Seven Brides for Seven Brothers: “Spring, Spring, Spring.” Six brothers and their girlfriends welcome the coming of spring after a very, very long winter in the mountains.

Posted by christinawehner on March 20, 2015 in Great American Songbook 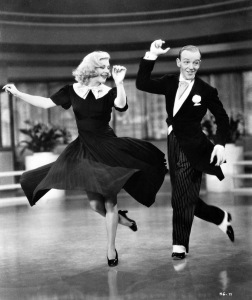 I’ve read a little bit of debate, though not a pressing amount, on who Fred Astaire’s best dancing partner was: Rita Hayworth, Ginger Rogers, Cyd Charisse, Judy Garland, Vera-Ellen. They’re all wonderful (though Rita Hayworth is a bit stiff for me, like she had an iron bar for a spine when dancing), but they’re also different, so perhaps it’s not fair to compare them

But for utter joy in dancing, no one beats Fred Astaire and Ginger Rogers. No one makes dancing look more spontaneous than those two, so effortless and so fun. You almost think you can get up and do it, too (I never think I can dance like Cyd Charisse).

Swing Time (1936) was their sixth movie together and has some of their very finest dances. The songs were written by Jerome Kern (of “Show Boat” renown) and the lyrics by Dorothy Fields (who writes some of the wittiest lyrics I’ve heard, like “A Fine Romance”).

In the story, Fred Astaire is a gambler gone out to seek his fortune so he can marry his sweetheart. However, once he gets to New York City, he runs into Ginger Rogers. She is a dancing instructor and he pays for a lesson, pretending to be absolutely awful. They then sing a song:“Pick Yourself Up.” She is disgusted with him, but when she then gets fired by her boss (Eric Blore) he pulls her back onto the dance floor to demonstrate how much she has “taught” him while the incomparably funny Blore looks on.

Part of what made Ginger Rogers and Fred Astaire unique is how they used their dances to further the plot. In this case, you can see Ginger Rogers undergo a complete metamorphosis of feelings towards him in only two and a half minutes and it is wonderful to watch her expressions throughout. First she looks exasperated and annoyed, but as soon as he begins dancing there is a complicated mixture of surprise, hope, pleasure and excitement. There’s also hesitancy, as she’s not quite sure where this is going, but gradually changes as she allows herself to fully get into the dance when she realizes the extant of his prowess. By the end, they have become one, demonstrating a complete comfort and ‘rightness’ that is truly unique to them.

In Puttin’ On The Ritz: Fred Astaire and the Fine Art of Panache, A Biography, the author Peter Levinson writes about how Fred Astaire always had his dances shot in one long, continuous shot. He never broke it up or wanted the dance viewed from different angles. He felt the dance should be viewed as a whole, with the whole body of each dancer in view at all times.