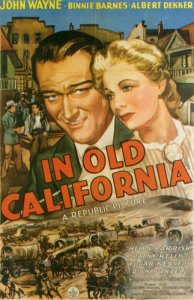 I tend to think of John Wayne as a man of action, either in war movies or westerns. A somewhat rugged man, a man who is better at socking the bad guy than making a speech. In Old California is certainly a western, but Wayne plays a slightly different kind of character than usual. He is a pharmacist. An educated, gentlemanly man from Boston who takes on the rough and tumble men from Sacramento. Though he can also bend a coin with his thumb and is a remarkably good shot…which makes one wonder what he was doing in Boston when he wasn’t learning to be a druggist.

John Wayne is Tom Craig, a druggist looking to open a pharmacy in Sacramento. On his way there, he incurs the animus of Britt Dawson (Albert Dekker), the local bully/would-be-land-owner who is bullying his way into wealth with a gun and a posse. Britt does have one redeeming feature, however. He is completely and sincerely nuts about saloon singer Lacey Miller (Binnie Barnes). She is engaged to Britt, but is much taken with the more refined strength of Tom Craig.

When Dawson warns the inhabitants of Sacramento not to rent a building to Craig to set up shop, Lacey rents Craig her shack, with the promise of 50% of the profits. She then falls completely in love, though it takes Craig a while to realize it.

There are a number of subplots and plot twists in the film. There is the triangle between Britt, Lacey, and Craig. Another triangle between Craig, Lacey, and the pretty (but spoiled) debutante from San Francisco who catches Craig’s eye. There is Craig’s sidekick, Kegs McKeever (Edgar Kennedy), who becomes Craig’s sidekick after Craig uses some of his fancy pain killer to ease a raging toothache. Kegs himself has a (sort of) romance with Lacey’s gun-toting, sharpshooting maid (Patsy Kelly). And then there is Craig’s power struggle with Britt and his brother Joe Dawson (Dick Purcell).

There is even a gold strike, a fever epidemic, a gunfight on the plains of California, a barroom brawl, a murder by poison, several moments of slapstick comedy, and an attempted lynching. I was also pleased to note that Binnie Barnes’ slightly common saloon singer was able to rout her ingenue competition with aplomb. Very satisfying

I think I would describe this film as broadly comic and agreeable. At times it made me think of Destry Rides Again. The local bully engaged in a land grab, his saloon singer girlfriend, the outsider who is more gentlemanly, but still tough. But there is far more comedy than drama in In Old California and it has an easy-going, unpretentious charm. The cast is good (I am always happy to see Binnie Barnes in a film), but part of the fun is watching John Wayne in a different kind of role.

Apparently, John Wayne’s father really was a pharmacist and in the movie Wayne seems to be having a lot of fun with the role. He is quite believable as the educated, well-spoken and polite pharmacist. He never takes offense, he never overreacts, he’s never threatened when people assume he is not as tough as they are (he seems to have an inner assurance that he is, in fact, much tougher).

I confess I was not initially much of a John Wayne fan, but the more I see his films over the years, the more impressive he becomes. I guess I never appreciated how he was able to draw all the attention to himself without even trying. He sort of inhabits a scene, without having to come across as aggressive or in-your-face. Even in In Old California, he is distinctly non-aggressive compared to Dawson, but your eye still watches him.

It’s interesting, because earlier this year I watched a movie called The Life of Jimmy Dolan, made in 1933 with Douglas Fairbanks Jr.. John Wayne makes a brief appearance in the film and he’s so young and callow and had none of the effortless presence he developed later. I guess he just needed time. My sister and I sometimes joke that an actor (or actress) doesn’t truly become interesting until they’re 30.

Not exactly one of John Wayne’s best films, but there is something winning about In Old California. It has a unique charm, as does John Wayne.

Thanks so much to Hamlette’s Soliloquy and The Midnite Drive-In for hosting The John Wayne Blogathon! For all the other posts, click here. 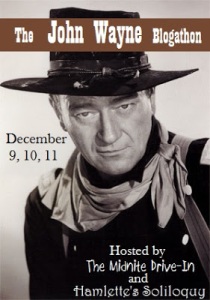 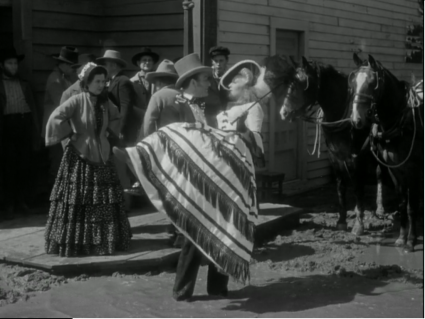 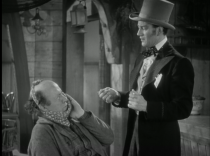 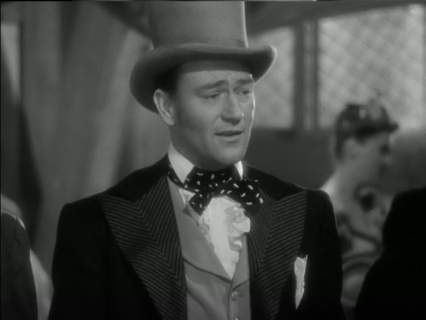 Posted by christinawehner on December 10, 2016 in Movies