The story is based on a novel by, of all people, H.G. Wells. It is a romantic triangle, about a woman married to an older man, but she loves another, though the film does not develop as one expects.

The film unfolds through various flashbacks. Mary Justin (Ann Todd) is married to the wealthy banker, Howard Justin (Claude Rains). When she was younger, she was passionately in love with Stephen Stratton (Trevor Howard), a poetry-quoting young biologist. But she said she could not bear to belong to anyone; she wanted to belong to herself. Stephen maintained that if two people love each other, they want to belong to each other, but she said she did not like the clutching and grasping and instead chose to wed Howard, who understood that she did not love him, but felt that they could make a good marriage based on affection and a shared enjoyment of wealth and power.

But when Mary and Stephen unexpectedly meet years later, the powerful spark of attraction is still there and they begin a passionate affair, with Stephen convincing Mary to leave Howard. Before she can, however, Howard returns. He’s furious and he convinces her that she would not be happy with Stephen and she agrees with Howard, leaving Stephen flat. Nine more years pass and she and Stephen meet at a mountain resort in Switzerland. The spark of uncontrollable passion is gone, but Howard does not believe it and starts divorce proceedings, which threaten to ruin Stephen’s job, his reputation, and his marriage.

(Spoilers are Rife) The way Lean begins the film is fascinating, because it is set up to make you think that Mary is trapped in a sterile relationship. She bumps into Stephen in a crowd of people. They are at a New Year’s costume party. She then joins Howard, who is sitting in a box high above the rest of the crowd, watching the crowd uninhibitedly kiss and dance and sing while Howard observes them from a detached perspective, even commenting that they look like puppets on a string. In our first sight of Howard, he turns around to face the camera looking rather like Mephistopheles. Stephen, on the other hand, is imbued with romanticism and their encounters are accompanied with romantic words and music. It makes one to expect Anna Karenina (or at least how Anna sees her story).

The brilliance of the film, though, is how by the end of the film, everything is reversed. “Do you know, Stephen, that we are practically strangers.” Mary says, when they meet again in Switzerland. Stephen has found more lasting, tangible love with another woman and has two children. Mary sees that he is happy. Not passionately happy, but contented and at peace with his life…perhaps a more lasting kind of happiness than their delirious love affair.

And it is clear that Mary’s marriage to Howard has not been as flat as it initially appeared. She considers it a success, they like the same things, clearly discuss politics and his work and seem to be a team with genuine affection for each other. She is highly self-aware, so that although she is carried away by romance, knows that romance is not enough. But the real irony is what happens to Howard. 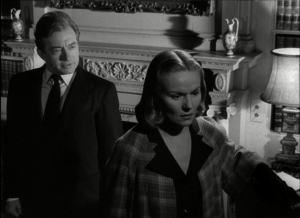 Claude Rains as Howard Justin is absolutely magnificent. Ann Todd and Trevor Howard are good, but it is Claude Rains who really leaves an impression on the viewer. He plays a man coldly rational, a man who sees himself as a manipulator of events, such as when he contrives to let Mary know that he knows about her affair with Stephen. His rationality is repeatedly contrasted with the romanticism of Stephen. And yet in the end, he emerges as the genuinely romantic one while Stephen fades into staid gentility.

It’s an amazing transition that happens subtly. What has happened is that Howard has fallen in love with his wife, though he did not know it. He’s found unexpected depths of passion and initially reacts with furious jealousy. It’s shown subtly. In the beginning of the film, he seems complacent about his relationship with Ann. By the end, before he discovers that Mary and Stephen saw each other in Switzerland, he is almost boyishly excited to see his wife again. When he thinks he’s discovered that she’s been unfaithful to him again, his hurt is palpable rather than the mere anger he experienced the first time. He even cruelly tells her to get out and that he doesn’t want her anymore, which crushes her.

And he perhaps has some reason for feeling jealous. Because although nothing happened between Stephen and Mary – it served more as a lovely meeting that brought closure to their relationship – it seems that Mary does love Stephen in a new way. Less emotional, more mature, deeper. A love that seems to think about him rather than herself. When Howard sues for divorce and names Stephen, she is concerned about Stephen and how it will ruin him and his family, not herself, and even resolves on an Anna Karenina-like suicide in order to prevent the divorce from going forward. 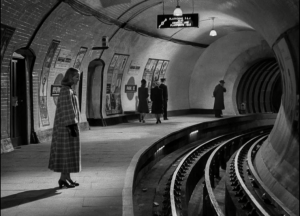 Howard, however, is the one who gets to rescue her. After dismissing Stephen’s love “as the kind that makes big demands,” of “nearness” and “belonging” and prone to “romantic hysteria,” he ends up loving a woman who does not love him and never will. A love that, essentially, makes no demands. The look of wonderment she gives him after he stops her from killing herself and asks her to come home is rather beautiful.

This post was written as part of the “Underseen and Underrated”, the CMBA Spring Blogathon. Click here for more posts!

Posted by christinawehner on May 16, 2017 in Movies

The Seventh Veil is an excellent British psychological melodrama with a dreadful ending. Not quite on par with the ending of Suspicion, but pretty bad nonetheless. Though The Seventh Veil is actually in the top ten highest grossing films of all time in Britain (adjusting for inflation), so perhaps I am in the minority. Or perhaps the ending is simply overlooked for the sake of a fascinating film, and it is a very fascinating film.

The film begins with psychologist Dr. Larsen (Herbert Lom) treating a concert pianist, Francesca (Ann Todd), who is suicidal and has a fixation about her hands, convinced that she can no longer play the piano.

Dr. Larsen’s contention is that psychology is like surgery, you must unclothe the mind in order to operate. He says the mind has seven veils – like the notorious “Dance of the Seven Veils” in the opera Salome (though I’ve read that some sopranos like to do the dance of the eight or nine veils, just so they can leave a veil or two on). Employing narcosis, he induces Francesca to tell him about her past, which the movie reveals in a series of flashbacks.

As an orphan of fourteen, Francesca was sent to live with her distant cousin Nicholas (James Mason), a brooding, wealthy, sophisticated and rather sinister woman-hater with a limp who has little use for a child in his house (but he likes cats!). However, when he discovers that she loves music and can play the piano, he sets out to transform her into a concert pianist, teaching her himself for hours a day. The film follows his oppressive hold over her and her many attempts to break free of his influence, all the while indeed becoming the great pianist that he dreamed she would be.

In some ways, it makes me think of Red Shoes. Francesca can’t live without her music any more than Vicky Page can live without ballet. And they both have a Svengali-like controlling influence hovering over them, who are necessary to their success.

James Mason as Nicholas is, of course, perfect. Nobody can brood better than Mason, or be suavely sinister and yet intense at the same time in the way he can. He absolutely dominates her life…almost living musically through her, like she’s possessed by him. 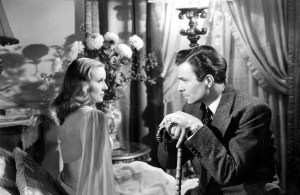 And Ann Todd’s cool reserve as an actress actually enhances this, because although we know she cannot live without the piano, she rarely seems to take much pleasure in it. Her oppressive fear of Nicholas and of injury to her hands (going back to a childhood caning that destroyed her chance of a music scholarship, later exacerbated by Nicholas’s constant focus on her hands) seems to sap all the transcendent joy of playing. She’s like a zombie at times.

The film is highly claustrophobic, echoing Francesca’s sense of being trapped in a small world of Nicholas and her music. And who knew a piano concert could be so tense? At her debut, where she plays Edvard Grieg’s piano concerto, her psychosomatic fear of her hands swelling makes one honestly wonder if she will make it through the concert.

Ann Todd also does an excellent job of “playing” the piano. Pianist Eileen Joyce taught Todd how to move her hands and arms and look convincing as a pianist and it is clear Todd must have worked very hard at it, though any close-ups of her hands at the piano were done by Joyce. But the film by no means shies away from showing Todd at the piano and the result is very convincing.

(Plot Spoilers) But that ending! The film has its share of a melodrama’s improbabilities (the psychological angle makes for great cinema, but is hardly realistic, and Ann Todd is not even remotely convincing as a fourteen year old child in the beginning), but I confess that it is the ending that irked me. Though there are two other men who Francesca loves at different times in the story, by the end she is rescued from her suicidal thoughts by Dr. Larsen and realizes that her true love is…Nicholas! Abusive, controlling Nicholas. 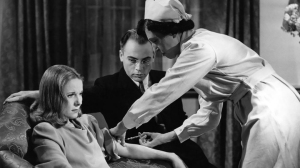 It’s the inverse of Red Shoes. Instead of killing herself because she cannot have both love and her piano, she sidesteps that issue by centering both her love and music on Nicholas. But I have a hard time believing that she could love him. She spends the entire film clearly resenting and fearing his control, unless we are to mistrust her flashback memories (which would ironically give the lie to Dr. Larsen’s idea that he can strip away all the veils). It seems inconsistent, and Nicholas far too sinister, for it to be a satisfactory resolution to the story. It would be like Trilby marrying Svengali and the author expecting his readers to rejoice. Or perhaps we are supposed to be made uneasy by the end?

But apart from the ending, it is a compelling movie that is well worth watching, especially for those who like James Mason or British cinema. The film fits squarely in that time period when Hollywood was also obsessed with psychology. The Seventh Veil was even released before Alfred Hitchcock released Spellbound. It’s well-acted (Herbert Lom is also excellent as the kindly Svengali-like psychologist), very much of its time, and has great music. It is also currently available on youtube.

Posted by christinawehner on April 10, 2017 in Movies