The Way We Live Now – Anthony Trollope…mostly about Mrs. Hurtle and Paul Montague 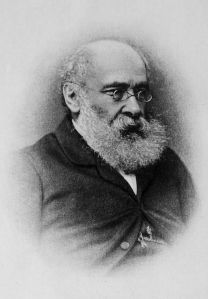 Anthony Trollope is, I believe, an underappreciated author and I love his books nearly as much as I do Dickens. He was a contemporary of Charles Dickens and William Makepeace Thackeray, very popular in his day, and his style is somewhere in between those two. He has more satire than Dickens and more warmth than Thackeray, though like Thackeray he tends not to deal with the lower classes. The Way We Live Now, serialized between 1875 and 1876, definitely leans more towards Thackeray’s satire; there’s scarcely an estimable person to be found.

When people write or talk about The Way We Live Now, what they usually discuss is Augustus Melmotte and Trollope’s slightly ambivalent attitude towards Jews in his books. Melmotte is larger-than-life, corrupt, ambitious, possibly Jewish and crashes into society through sheer wealth and brazenness and even manages to get himself elected into parliament, only to overreach himself and his wealth and reputation comes crashing down.

He is a fascinating character – almost sympathetic at times – and it was interesting how his character seemed to take over the book as the story went along, almost as if Trollope had not originally intended to make him quite so central to the story.

The book is definitely a satire on the English aristocracy – often impoverished in this book, often silly, living idle lives and seeking to marry money. It’s about wealth and fraud and status and even the search for love…at least some are searching for love. Most people are searching for wealth and very few actually find love.

However, because so many people talk about Melmotte I thought I would rather discuss a different character in the book, one who fascinated me – both because of her character and for Trollope’s treatment of her.

Mrs. Winifred Hurtle is an American woman, a gun-toting American woman who has lived  in the West and reportedly shot a man in Oregon and fought a duel with her husband.

Paul Montague is a British gentlemen, with no particular financial means, ambition or even above-average intelligence (the state of most of the English gentlemen in the book, except that Paul is more self-aware and has morals). He is evidently good-looking, has pleasant manners and enjoys the company of women. When he goes to America for a time, he meets Mrs. Hurtle and falls in love. She is divorced and he begs her to marry him, despite her own reservations and fear of being hurt.

All of this, of course, takes place before the book begins. We first meet Mrs. Hurtle in England. Paul has returned to Britain, heard the rumors about her (regarding shooting the man and such) and decided that he cannot marry her after all. He also falls in love with another woman, Hetta Carbury. He writes a letter telling Mrs. Hurtle that the engagement’s off and she comes to England to see if she cannot win back her man. 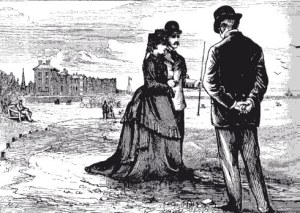 “On The Original Illustrations of Trollope’s Fiction” – Mrs. Hurtle, Paul Montague and Roger Carbury at Lowestaffe – illustration by Lionel Fawkes

I suppose what fascinated me is how Trollope treats her. On the one hand, she is palpably more intelligent than Paul Montague, she has courage, she loves him greatly. On the other hand, Trollope seems to consider it natural that she would not make him a good wife, at least not in England, among the kind of society he associates with. Simply the fact that she has lived out west, in uncivilized territory, where she had been obliged to protect herself using a gun, seems to have disqualified her for happiness with an English gentleman.

It is true that Mrs. Hurtle isn’t always entirely up-front with Paul, but he is not entirely honorable with her. Once in England, she attempts to win him back, even manipulating him into taking her down to an sea resort called Lowestaffe, where Paul is seen with her by his friend, Roger Carbury (who is also in love with Hetta).

All throughout this, Paul considers himself hard-used. He wants to be done with her and marry Hetta, but he has trouble telling Mrs. Hurtle. He is partially afraid (since she’s so handy with a gun), but also lacks the moral fiber to just tell her and truly be done. He keeps blowing hot and cold.

Lack of moral fiber is a big issue. Either characters have no conception of true morality or they lack the fiber to act on morality. When Melmotte is appointed head of the board of directors for the recently formed Great South Central Pacific and Mexican Railway, which was formed more to make money on shares for the board members (and especially Melmotte) than to build an actual railroad, Paul knows it’s wrong, but doesn’t initially have the will to get out of it. The rest of the board is content to rake in the money.

The only person who does have the willpower to do right is Roger Carbury, who is in love with Hetta and therefore greatly disgusted with the conduct of Paul regarding Mrs. Hurtle. He has the will, but seems to lack the natural goodness of heart. He is good, but almost more from training (he is of the old school – he is the one who makes a comment about “the way we live now”) than from a spontaneous expression of goodwill.

Lord Nidderdale, who it has been arranged will marry Melmotte’s daughter, Marie, is an example of a man who occasionally has good impulses, but completely lacks the discipline or moral fiber to truly be a good man. He is simply an amiable man who at least has the ability to admire Marie as a person and not just see her as the means to great wealth. Felix Carbury, Hetta’s brother, has no such amiable qualities. He is practically psychopathic in his self-absorption and cannot see Marie as a real person.

But back to Mrs. Hurtle. She garnered the most sympathy from me as a reader because she fails (the book is full of failures, Melmotte being the most conspicuous) and fails gracefully. When she finally accepts that she cannot win Paul, she retires without wreaking any of the revenge that she half-wanted to wreak and parts on kind words. 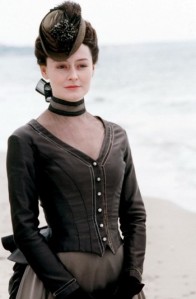 She really makes me think of Jean Harrington in Preston Sturges’ 1941 movie, The Lady Eve. In that movie, Jean Harrington is an adventuress who meets a handsome man from a wealthy family. She wins him, loses him, sets out to win him again (just as Mrs. Hurtles does), employs manipulation and her full arsenal of mental and physical endowments and has him going in circles. The big difference is that she wins in that one. She is much smarter than he is and the movie celebrates that.

The difference, of course, is in nation and time. The Lady Eve is an American movie made roughly 60 years later. In a 1940s screwball comedy/western, I could so see Mrs. Hurtle running off with the picture and her man. But in 1875 and in an English novel, she could not be accepted in society and even Mrs. Hurtle knows it. What she wants is for Paul to marry her and live in America.

My sister pointed out that if Paul had truly loved her (and he claims to have fallen in love) then it shouldn’t have mattered what people said about her (the guns and such). He would have married her and lived in America. My sister’s theory is that it was just lust. As soon as he was back in England, the spell was gone and he wanted his nice, young (Mrs. Hurtle is a few years older then he), innocent English bride.

His conduct can actually be compared to another man’s conduct in literature: Edward Ferrer’s in Sense and Sensibility. Edward is engaged to Lucy Steele but falls in love with Elinor Dashwood. However, instead of casting Lucy aside, he stays true to her….even though he knows he and Lucy are ill-suited to each other. Because he is the one who asked Lucy to marry him, and a woman’s position was more precarious – time spent engaged is time not spent looking for other husbands – it is neither fair nor right to toss women aside when you’ve changed your mind.

Paul, however, acts quite differently. Even Trollope acknowledges the unfairness of it when Mrs. Hurtle has lost Paul: “They had played a game against each other, and he, with all the inferiority of his intellect to weigh him down, had won, – because he was a man. She [Mrs. Hurtle] had much time for thinking, and she thought much about these things. He could change his love as often as he pleased and be as good a lover at the end as ever; – whereas she was ruined by his defection. He could look about for a fresh flower and boldly seek his honey; whereas she could only sit and mourn for the sweets of which she had been rifled.”

Paul wins his Hetta in the end and even the friendship of Roger. Mrs. Hurtle returns to America.

Despite this massive frustration, the book really is good. Greed, corruption, toadying up to wealth – it’s all there and very human. There are a few who break the mold. Marie Melmotte wants to be loved (her father does not love her and men only want her money) and it is fascinating to watch her grow in the book and realize that she can have a say in her own affairs. Most characters don’t change, however. They act according to their own upbringing.

Notes: There is a TV mini-series of this book, adapted in 2001. It stars David Suchet in a marvelous and magnetic performance as Augustus Melmotte. Miranda Otto (Eowyn in LOTR) plays Mrs. Hurtle. The movie is a very good adaption, though I did notice that they made Mrs. Hurtle a bit more of a villain than she is in the book. I suppose they did it to keep the audience from hating Paul and to allow us to root for him to get together with Hetta. In fact, Paul is altogether a better, stronger person in the movie. The book is all about human weakness.

Posted by christinawehner on June 24, 2014 in Fiction