When I mentioned to my grandfather that I was reviewing a movie named Rhubarb and was explaining (not to him) that a rhubarb was a baseball term for a fight, he said it was a bit like a blast from the past. He hadn’t heard that word used in thirty or forty years. The only reason I knew the term was because of the movie; I’ve never heard the word used once during my fifteen years of baseball enthusiasm.

In the 1951 film Rhubarb, the word rhubarb not only refers to a scrap between ball players, but is also the name of a cat, who is given that name because he is a fighter. As millionaire T.J. Banner (Gene Lockhart) says:

“I like things that fight back – whether it’s animal or vegetable. That’s why I eat artichokes all the time. An artichoke doesn’t just lie on a plate like a mess of spinach waiting to be devoured. It gives you a battle. It doesn’t give up ‘till you eat its heart out.”

The film is a bit episodic, but it follows the fortunes of Rhubarb, a mangy, vicious cat that can defeat two dogs in pitched battle and likes to steal golf balls from the over-privileged at play. Banner is so taken with him that he adopts him and the two develop an unexpected bond, with Rhubarb taking the place of Banner’s unaffectionate daughter, Myra (Elsie Holmes). It’s actually incredibly sweet.

But soon that phase of the story is over when Banner dies, unexpectedly leaving everything to Rhubarb and cutting Myra out almost entirely. Rhubarb even inherits the Brooklyn baseball team that Banner owned (a team so bad they are derisively known as the Loons). Press agent and long-time friend Eric Yeager (Ray Milland – the man who had to do the dirty work in trapping Rhubarb so Banner could adopt him) is appointed Rhubarb’s guardian, an unenviable task since he now has Myra on his case, as well as the entire Brooklyn team, who refuses to play for a cat. 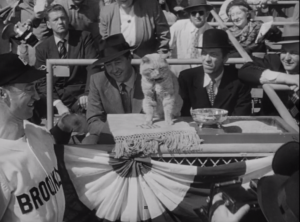 Rhubarb at the baseball game – a butler, some milk and even his own litter box

The film actually has a strong Damon Runyon feel to it. Even Milland talks a bit Runyonesquely, calling girlfriend Polly Sickles (Jan Sterling) “doll” and “dame” and generally talking more like a mug (not always convincingly) than a gentleman. There’s a little of everything in the film: baseball, gangsters with names like Pencil Louis and Cadaver, betting, Myra’s attempts to take the fortune away from Rhubarb, a little romance, cat allergies, picturesque characters and language, the rivalry between Brooklyn and Manhattan, cops. The film is often tongue-in-cheek, but with feeling.

After Yeager manages to snooker the baseball team into believing that Rhubarb is actually good luck for them, suddenly they start winning. But Yeager is a victim of his own success, because now the team won’t let him or Rhubarb miss a game and all he wants to do is get married. He and Polly try at least four times. To make things more complicated, Polly discovers that she’s allergic to Rhubarb…though it turns out to be a blessing in disguise. But Yeager can’t come near her without first cleansing himself of all cat hair.

The cast includes William Frawley as the manager of the team, a man whose only focus is the team (“I don’t know. Ballplayers ain’t like people…exactly.” he mumbles to himself when he learns that Rhubarb has inherited the team, speculating that the team will react badly). If you look carefully among the ballplayers, you can also see an extremely young Leonard Nimoy. He even gets a line. Jan Sterling plays Polly, a baseball fan who keeps having to put off her marriage for the sake of the team. Her real-life husband at the time, Paul Douglas, also gets a cameo at the end. He’s the man with the newspaper who watches as Rhubarb walks down the street, followed by a dozen kittens (“What a cat!” he says admiringly. “A litter from three wives.”). 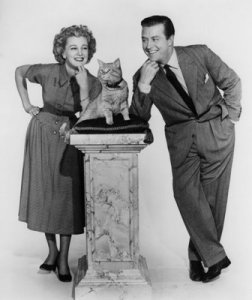 Rhubarb the cat is played by Orangey, who was something of a movie star. His debut came in Rhubarb, but he also appeared in Breakfast at Tiffany’s, The Incredible Shrinking Man, and The Comedy of Terrors. He was apparently a rather vicious cat in real life, but he had the happy knack of being willing to stick around longer than most cats during filming, though he would still get fed up and run off the set (as I suspect most cats would do). Many cats were used during the filming, however, often for specific stunts.

In truth, Orangey often looks distinctly peeved in the film. His tail is always swishing and his ears frequently flatten and his general demeanor is of a cat barely tolerating the humans around him. Ever since adopting a cat, I’ve been paying more attention to cat behavior in film and often what I see is a swishing tail. A happy cat is usually one with ears forward and alert, tail straight up with a little curl at the end, slowly blinking eyes and a general willingness to expose their stomach or stretch out. Still, Orangey despite his evident irritation, can’t help looking seriously cute.

The baseball part of the story was filmed at Wrigley Field (in Los Angeles, not Chicago – it was home for a minor league team). I have to believe that the Brooklyn team is supposed to be the Dodgers and Manhattan represents the Yankees. Sadly, the Dodgers would leave Brooklyn for LA only seven years later. Brooklyn fans – such as Doris Kearns Goodwin – never have forgotten their beloved team or ceased to mourn for them.

This post is my contribution to the Animals in Film Blogathon, hosted by In The Good Old Days of Classic Hollywood. For a list of all the wonderful posts for this blogathon, follow this link.

And just because I have too many pictures, here is a montage of some scenes from the film.

Rhubarb and the Trap

Milland plots the capture of Rhubarb 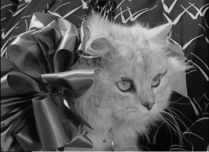 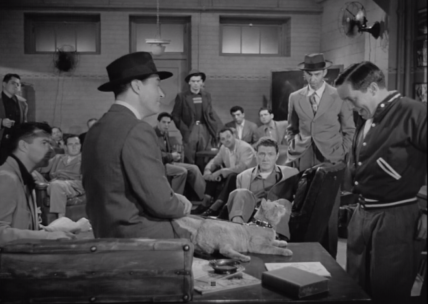 Yeager introduces the team (including Nimoy) to Rhubarb

T.J. Banner and his beloved Rhubarb

Posted by christinawehner on May 28, 2016 in Movies