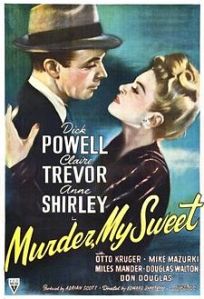 When I was watching Gold Diggers of 1933 some time ago, I marveled that Dick Powell, playing an eager, enthusiastic, boyish tenor, could turn into the hard-bitten and wry private eye, Philip Marlowe of Murder, My Sweet. It was one of the more radical mid-career changes I’ve seen. But for me, Dick Powell is Philip Marlowe, even more so than Humphrey Bogart. He has that world-weary, wry way of speaking typical of Marlowe in Raymond Chandler’s novels and whenever I read a Chandler novel, I can hear Dick Powell’s voice speaking Marlowe’s lines.

Murder, My Sweet was based on Raymond Chandler’s novel, Farewell, My Lovely, but the title was changed because it was thought it sounded too much like a musical. But Murder, My Sweet is one of those movies I seem to enjoy more each time I watch it and it has become one of my favorite noirs. It also has one of those plots that is so confusing that I seem to have new questions about it each time I watch it. And it’s streamlined in comparison to the book.

Moose Malloy (Mike Mazurki) wants private detective Philip Marlowe (Dick Powell) to find his girlfriend, Velma, who he hasn’t heard from since he was sent to prison. It seems like an innocent enough job, but it seems to trigger all sorts of things and people suddenly want to hire Marlowe to look in to different things, to get out of things, to keep things hidden. The police are on his case, a jade necklace is stolen, a man is murdered. An elderly millionaire, Mr. Grayle (Miles Mander), and his young wife, Helen Grayle, (Claire Trevor), and a daughter from his first wife, Ann (Anne Shirley) are involved. There is also a shrink, Mr. Amthor (Otto Kruger), who is also interested in the stolen jade necklace. Marlowe’s hit on the head, choked, drugged, vamped, threatened, plead with, and hounded by cops. He has a rough film. His outstanding strength is not that he’s such a great detective, but that he’s persistent. People always assume he knows more than he does, but he thinks on his feet and manages to outfox everyone anyway.

Murder, My Sweet is called a film noir, but it’s more lighthearted than the usual noir, mostly because of the colorful script that comes from Chandler’s novel and the way that Powell delivers his lines and voice-over narration: “My bank account was trying to crawl under a duck” or his description of the Grayle’s mansion: “It was a nice little front yard. Cozy, okay for the average family. Only you’d need a compass to go to the mailbox. The house was all right, too, but it wasn’t as big as Buckingham Palace.” He’s irreverent and so the viewer is never really allowed to take the film too seriously. Even when he’s been drugged and having bizarre dreams about falling, doors and syringes, he still keeps up a stream of sarcastic commentary, even though it’s clear he’s just trying to hang on to his sanity.

“‘Okay Marlowe,’ I said to myself. ‘You’re a tough guy. You’ve been sapped twice, choked, beaten silly with a gun, shot in the arm until you’re crazy as a couple of waltzing mice. Now let’s see you do something really tough – like putting your pants on.”

Philip Marlowe dominates the film, but though the other characters are less central they are still highly picturesque. It’s not the deepest showcase for femme fatales, though. Clare Trevor as Helen Grayle does very well as the dangerous blonde who likes chasing men (I imagine they meet you halfway” Marlowe replies). She’s central to the plot, the reason everything is happening, but she only has about three or four scenes in the film (though she makes the most of them) and it is pretty obvious from the beginning where her character is coming from. 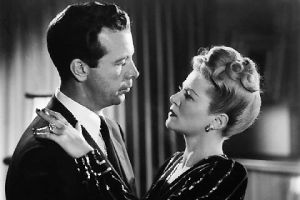 Anne Shirley as Helen’s step-daughter, Ann, gets one of the more forgiving non-femme-fatale roles in a noir that I’ve ever seen. It’s partially because she actually has more scenes than Claire Trevor does. She’s worried about what Helen’s shenanigans will do to her father and is trying to keep Marlowe away from both her father and Helen. I thought she brought a freshness and spunk to the role.

In the book, Ann was actually a reporter and you would think that would be a more empowered role than daughter of a millionaire, but to be honest, I think she’s better in the movie. In the book she has a case of hero-worship and makes a few slightly embarrassing speeches about how wonderful he is while he shrugs it off like a bored courtesan who has half of Paris at her feet. In the movie, she’s much more suspicious of him and there are mercifully no embarrassing hero-worship speeches.

Mike Mazurki as Moose Malloy is particularly memorable as the hulking lug who is not too bright, but just wants to find Velma (“Cute as lace-pants, she was”) and doesn’t usually mean to hurt anyone, but is just so strong (though a few times he does mean to hurt someone). He may be just a lug, but he’s still sincerely in love.

It’s not as bleak as many film noirs, though it does have that general atmosphere of corruption with a world-weary Marlowe who seems more, in the words of Ross Macdonald in regards to Chandler, like a “slumming angel” than an actual part of the corruption. But that should not obscure how much fun Murder, My Sweet is. It makes for a good transitional film for Dick Powell. Some of his later noirs, like Pitfall, are more uncompromisingly pessimistic. Another adaptation of a Chandler novel, The Big Sleep with Humphrey Bogart, is like that, too: a fun film noir.

Posted by christinawehner on October 7, 2015 in Movies