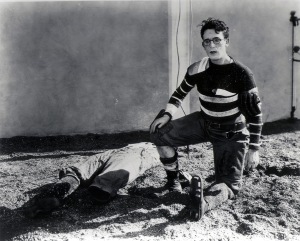 For my Dad’s birthday we had pizza, pie and Harold Lloyd and the two films we watched were The Kid Brother (1927) and The Freshman (1925), among two of Harold Lloyd’s best full-length films. The Freshman was certainly his most popular at the time.

Harold Lamb (Harold Lloyd) is excited to be off to Tate University, where he dreams of being voted the most popular student of 1925. The previous year, Chet Trask (James Anderson), the captain of the football team, was nominated and Harold has his picture from the yearbook on his wall to remind him of his goal.

Harold is almost ridiculously eager to please. He has a little dance he does whenever he’s introduced to someone new and calls himself “Speedy,” while naively thinking that he can buy his way to popularity. But things do not go as planned when he first arrives. The campus bully (Brooks Benedict) plays a number of practical jokes on him and then convinces him that he is popular even though everyone considers him a joke. And all the while, people take his money, go to his parties, eat the ice cream he buys and laugh at him.

The one person who truly likes him is Peggy (Jobyna Ralston), his landlady’s daughter, who also works as a hat check girl at the hotel. She loves him as he is and admires his plucky spirit (her hardworking life also provides a contrast with that of the idle students). Believing that he needs to join the football team to ultimately reach his goal, Harold tries out and practically gets killed. The coach (Pat Harmon) can’t use him, but hates to dampen his gutsy enthusiasm and Chet suggests making him a water boy and letting him believe that he’s really part of the team. Naturally, the entire campus finds out and continues to laugh at Harold.

As I write the plot outline, it occurs to me that this doesn’t sound all that funny. It sounds cruel, but the film is an absolute hoot and we know in the end Harold will win over the school. But there are a few genuinely heart-breaking and humiliating moments. But we admire Harold and cheer for him all the more for it, as does Peggy. As Peggy tells him, he needs to learn to make them like him for himself and not for what he does for them.

The Freshman was Harold Lloyd’s most popular film and birthed a slew of college-related films, such as Buster Keaton’s College (which is not one of Keaton’s best, though it has its moments). Though we never see anybody study or attend classes. As one of the opening intertitles reads, Tate University is “a large football stadium with a college attached.” Some things never change. Actually, it might have been worse, then. At the time, college football was far more popular than professional football. 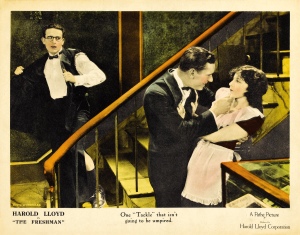 The football game at the end is pretty hilarious, looking like a battleground with the injured players lying about the benches, while Harold waits his chance to enter the game, only to get knocked out instantly, only to pop back up again and play (nowadays, with concerns over concussions, he’d have been taken out for good – compare this treatment of football injury with the 2015 film starring Will Smith, Concussion). It was filmed at the Rose Bowl, but shots of the crowds cheering were taken at California Memorial Stadium when UC Berkeley played Stanford (they play every year and it’s called The Big Game – a tradition over a hundred and twenty years old).

Another great scene is when Harold throws a party at the hotel for the student body. His tailor has to rush to finish his suit and warns him not to make too many sudden movements – the seams might come apart. However, he decides to come along in case Harold needs him to sew anything up (what service!). Naturally, all sorts of things start coming undone and the fun is in watching how Harold manages to keep anyone from seeing what is happening while the tailor surreptitiously sews him back together. He even manages to negotiate a dance while losing his sleeve and his buttons. The inventiveness of Harold is inspiring.

That is what I enjoy about Harold Lloyd. The plot isn’t that original, what is is how Harold copes with what happens. You’re always wondering how he’s going to deal with each crisis as they come up. That perhaps sums up the Harold Lloyd persona: inventive, eager-to-please, determined and goodhearted. And one of the things that sets Lloyd apart from Charlie Chaplin and Buster Keaton is how much more rooted he is in popular culture. One gets a far better sense of what it would have been like to live during that time and he seems to interact more with the daily objects of life. And it is interesting to think of so many things we take for granted as being fresh and new.

At the beginning of The Freshman, Harold and Peggy meet-cute over a crossword puzzle, each absorbed over the same question. The first crossword puzzle appeared in a newspaper in 1913 and became a phenomenon in the 1920s. In another scene, we see Harold’s father listening to the radio and trying to hear far-away stations (it was a hobby at the time to write down and compare notes about what stations people had heard).

Another interesting thing about both The Freshman and The Kid Brother is that they contain messages I still hear in movies today – believe in yourself, have confidence, be true to yourself. Charlie Chaplin and Buster Keaton already are – and ever are – themselves. Harold Lloyd is a touch more vulnerable in that respect. The other thing I find interesting is that his eventual success at the end never comes out of the blue. We spend the entire film watching him inventively get in and out of situations, it’s no wonder that in the end he should triumph.

Posted by christinawehner on February 29, 2016 in Movies