How I Came to Appreciate Charlie Chaplin

A brief moment to confess, which is good for the soul. I am disgracefully late in writing this contribution to “The Charlie Chaplin Blogathon.” My own blogathon, no less! Life became more hectic than I expected and I decided that I would rather read all your contributions than write my own. And in truth, I am glad that I did so, because my topic was on how I came to appreciate Charlie Chaplin and reading the many wonderful contributions has served to increase my appreciation far more than any writing I could have done. Once again, I want to thank you all for your participation and thank Domi for inviting me to co-host! It was a pleasure.

So, how did I come to appreciate the artistry of Charlie Chaplin? As a child, I used to watch Charlie Chaplin short films. I was so young, that I could not read and would nudge my siblings for an interpretation every time there was an intertitle.

But, in truth, I don’t recall having much difficulty following the plots and what stayed with me were images. The moment Chaplin cooks his shoe and then proceeds to eat the laces as if they were spaghetti. The moment in “The Vagabond” when Edna Purviance comes back to get the violin-playing tramp at the end, who has rescued her from gypsies. The time she dressed up as a boy in “Behind the Screen,” which I somehow conflated in my mind with “The Vagabond.” The time he takes a bite out of a child’s hotdog. These were the moments that stayed with me, and I experienced a profound sense of deja vu when I went back as an adult and saw all these films. The moment of recognition, the realization of where these scenes had originated, was sweet. I was extremely excited when I found that the hot dog scene was from Circus.

But after my youth, I largely left Chaplin behind. I knew who he was; I had fond memories of watching him, but that was all. Then I watched The Great Dictator and was oddly not impressed (I was still young and the speech at the end was all I recalled). Some years later, I tried Modern Times and was still oddly not impressed. I began to watch Buster Keaton films and came to the conclusion that I didn’t like Chaplin so much.

What changed it all was watching Keystone Comedies and an increased interest in silent films. I saw Chaplin in a few Keystone films, then watched him through his Essanay and Mutual films. I watched “The Pilgim” and “Shoulder Arms” and “A Dog’s Life.” I next watched The Kid and then The Gold Rush. It seemed so obvious why he was so great, how he transformed silent comedy and led the way, how brilliant his gags were (for example, the gag with the clock that he takes apart in “The Pawnshop,” which he treats as if he were a dentist, a doctor, a jeweler, as though it were a can he was opening and so on; his inventiveness was a delight). And after watching Keystone films, as interesting as they were, I appreciated the way Chaplin had developed as a storyteller, how his gags became a part of his story. 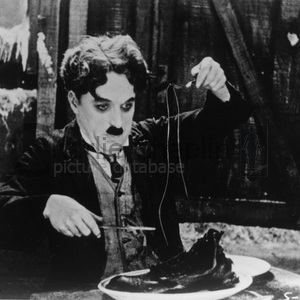 But what really impressed me was how he used comedy to take on some truly awful topics. Starvation in The Gold Rush? Turn it into comedy. Drug use in “Easy Street?” Hilarious! Poverty in The Kid, his most Dickensian film? He even took on Hitler. He made us care, made us aware, and made us laugh. Remarkable achievement. Right up there with Charles Dickens in that respect.

And at the same time, he was important in moving forward silent comedy, and silent cinema in general. I think understanding his place in cinema history helped me appreciate even his comedy, if that makes any sense.

Perhaps it’s been a slow journey to full appreciation. Because he was always talked about in near reverent terms, I wanted to be a rebel and not appreciate the one everyone else appreciated. But sometimes when someone is so often called great, it is because they truly are great.

“All images from Chaplin films made from 1918 onwards, Copyright © Roy Export S.A.S. Charles Chaplin and the Little Tramp are trademarks and/or service marks of Bubbles Inc. S.A. and/or Roy Export”

Posted by christinawehner on April 17, 2018 in Movies