Why do I like the 1952 pirate film Against All Flags? It’s very simple. It’s the scarf. That scarf had me at hello. 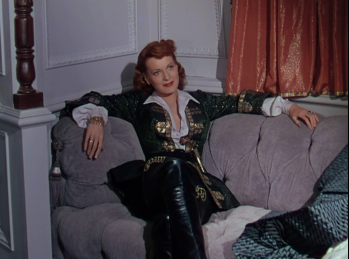 In fact, if I have to be a pirate, if I was forced into it, if someone pointed a gun at me and told me I had to be a pirate, I would want her wardrobe. I’d even take the hat with the purple feathers and the pistol. I’d probably take it if I wasn’t a pirate. 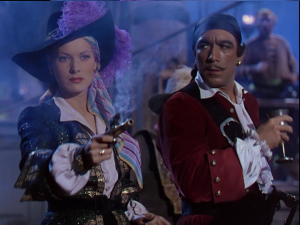 Another reason to like the film is that it stars Maureen O’Hara and Errol Flynn. She is a pirate named Spitfire and he is a British Officer pretending to be a deserter so that he can infiltrate the pirate island stronghold and scupper their cannons so the British navy can clean the pirates out.

This is a  latter-day swashbuckler for Flynn, though a somewhat more harassed Flynn than the derring-do Flynn of the 1930s. He still derring-does, but frequently wears an expression of….well, harassment. He’s trying to do this job, but has run into Spitfire and rather inconveniently fallen in love, which ignites distinct hostility and jealousy from Anthony Quinn’s pirate captain. Not to mention the slightly loopy Indian princess he rescues from a fate worse than death, who keeps flinging herself on his neck, which ignites the jealousy of Spitfire. It’s difficult to get a job done with people either trying to kiss you or kill you.

Spitfire, on the other hand, is the only woman of any influence on the island and inherited her pirate ships from her father. She was raised to be an excellent markswoman, the better to defend her honor. She will even fight her own duels if necessary. She’s also not bad at fencing, though we are, alas, deprived of the pleasure of seeing her fight against Flynn. He gets to fight Quinn while she takes on some nondescript pirates. Phooey!

Though having lived as a pirate her whole life, she doesn’t have any particular loyalty to them. She is a woman who has learned of necessity how to get along in an aggressively male world and by the time she meets Flynn has decided that she is tired of constantly warding off the unwanted attention of other pirates. It’s exhausting to be in a perpetual state of fending off rapacious men. She wants to try out a different life, one with maybe more room for wearing dresses and letting her hair down, so to speak.

She does actually wear some dresses in the film, but it’s her pirate costumes that catch one’s eye.

The pirate ships look more like sets and Flynn seems to have a double for his fight scenes, but the film is lighthearted and O’Hara in particular seems to be having fun striding about the scenes and fencing…and wearing those awesome boots. I’d make that movie for the sake of wearing those boots. And the scarf. And the hat with the purple feathers. And nearly everything else about her attire. If you have to be a pirate, you might as well be a stylish one.

This is my contribution to the “Swashathon,” hosted by Movies Silently. Make sure to read all the other piratical postings, here!

Posted by christinawehner on July 14, 2017 in Movies