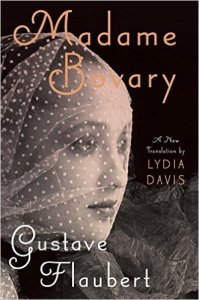 It’s amazing how Gustave Flaubert can write such a tragic ending for a story about a provincial town and one rather silly woman. One is hard pressed to find many sympathetic characters, yet by the end I felt devastated by their stories. Those with some virtues come to sad ends, while the venal, greedy and grasping live on.

Madame Bovary was published in 1856 by Flaubert. It’s subtitle is “Provincial Ways” and is a story of the unspectacular and ordinary. What surprised me was how little sympathy Flaubert seems to have for the unspectacular and ordinary. It is the story of Emma Bovary, who is married to the dull and inferior doctor Charles Bovary and constantly finds life a disappointment. She expects grand passion, romance, and occurrences that demand an extraordinary response from her, but life and people remain resolutely common.

(Plot spoilers contained in this review) – Flaubert employs a unique tone throughout much of the book. Somewhat detached, like he is looking at characters through a microscope while they expose themselves as mediocre, self-deluded, shallow, ineffectual, venal, selfish, grasping, and cowardly.

Emma marries Charles and expects an exciting life, only to realize that, though he adores her, he is mediocre (he manages to maim a patient for life) and lacks imagination. The pharmacist, Homais, is self-important and imagines himself a philosopher (he also prompts Charles to perform the risky surgery that leads to the maiming). Leon is a clerk with aspirations to romanticism and is somewhat of a kindred spirit with Emma, but fundamentally weak-willed. Rodolphe is the cad who loves and leaves Emma. Then there is Lhereaux, the financially predatory draper who ensnares Emma in debt.

While one can sympathize with Emma’s desire for something more, Emma herself is rather silly. She is always acting out according to some kind of romantic model. She rarely seems to experience her own emotions because she is so busy trying to experience the heightened emotions she’s read about. She’s playing a part in a world that has no room for such roles; she wants to be Louise de la Valliere (mistress to Louis XIV before becoming a saintly nun), a martyr or sacrificial wife or saint or mistress. She is waiting for a man to arrive who can inspire these passions. The irony is that she is desired and loved by a surprising number of men, but it rarely inspires the glorious feelings she anticipates.

At bottom, Emma seems a deeply unhappy and discontented woman – so much so that she is frequently unwell (always to Charles’ great concern and helplessness). It’s her hollow despair and grasping at some kind of meaning that leaves the reader feeling an equal sense of hollowness and gloom by the end of the book. Flaubert seems to offer no hope of any deep meaning. Religion, love, duty, philosophy? It is all reduced to empty cant by the characters (like when the cleric and Homais debate religion and philosophy over Emma’s dead body at the end of the book). 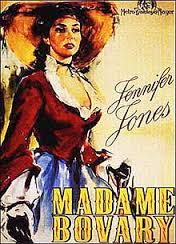 One of the problems is that Emma is so selfish. No matter what role she is playing – devoted mother, repentant sinner – she always has more than half an eye on her emotional responses to these roles, which inevitably is less than inspired.

But most characters are selfish in Madame Bovary. An exception is Charles, but I alternate between admiring his genuine love and frustration with his complete and supine cluelessness. The only person who seems to experience genuine and admirable emotion is Emma’s father, a farmer named Rouault. He fondly remembers bringing his wife home on the night of their wedding and is crushed at the death of Emma – all without a hint of irony and possessing genuine dignity.

Ultimately, although the story is often described as though Emma’s world as what lets her down, one can’t help but wonder if she would have always been dissatisfied, no matter what kind of life she lived. That the emptiness is in her, not the world. The book has also been described as expressing Flaubert’s contempt for the pretensions of the bourgeoisie, but he hints that even the aristocrats’ lives are less romantic than one would think, describing one figure who romantically knew Marie Antoinette as sitting vacantly with soup dribbling down his chin. The entirely book is resolutely anti-romantic.

Flaubert also goes into meticulous, though compact, descriptions of nearly everything. His style is celebrated for that, but I must confess that details were never as interesting to me (I’m not as visual as some readers). However, his metaphors are unique (the carriage in which Emma and Leon consummate their affair is described as being shut up like a tomb and tossing in the sea). On the whole, however, I found his tone detached…up until the devastating ending where Emma commits suicide.

She expects even suicide to be a brave and romantic gesture, like those figures who achieve immortality through beautiful death. Instead, death is an agonizing, drawn-out process that ultimately brings grief to her husband, father and child. The emptiness of it all, her extraordinary desire for something to fill her soul with meaning ultimately seemed very human and and very sad and I was surprised at the power of my response to her at the end, as well as to the inherent progress of life that seems to reward venality and punish sentiment.

Posted by christinawehner on February 28, 2017 in Books 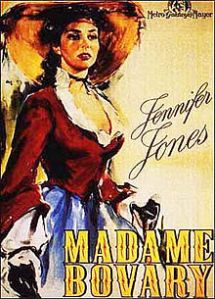 Madame Bovary is one of those classic novels I’ve been meaning to read for a long time, along with watching the 1949 film adaptation of it, so when Love Letters to Old Hollywood announced the “Vincente Minnelli Blogathon,” I was quite excited to see the film and read the book (though I haven’t actually read the book yet).

Vincente Minnelli is one of those directors I am always aware of enjoying, even though I am not as good at observing the distinctive style or techniques of a director. I associate him with musicals (The Band Wagon being one of those movies I never tire of seeing), but he also did comedies and dramas and, in the case of Madame Bovary, costume dramas.

Madame Bovary is adapted from the novel by Gustave Flaubert and is set during the mid 1800s. Emma Bovary (Jennifer Jones) is the daughter of a farmer, who grew up on romantic literature much in the way Don Quixote gorged himself on chivalrous adventures. She fully expects life to be a romance, to be beautiful, and when she first meets the doctor, Charles Bovary (Van Heflin), she assumes he is her knight in shining armor, so to speak, even though Charles warns her that he is not a very exciting person and only an adequate doctor who will never rise in the world.

It was hard for me not to come away with the impression that Emma Bovary is essentially a silly woman. Not a pragmatist like Scarlett O’Hara, she lacks her grit. She also lacks cleverness. My understanding is that this is not radically different from Flaubert’s portrayal in the book, though. She makes Anna Karenina look wise by comparison. 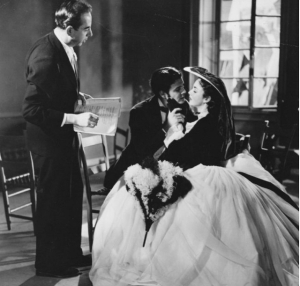 Because of the book is (I’m getting this from hearsay) about her desire for something extraordinary in a very un-extraordinary world, I also couldn’t help wondering if MGM was maybe the wrong studio to make this film. The film looks a bit too pretty, too picturesque and charming. It tends to work against our sympathy with Emma. Flaubert is noted for his realism, which is not something MGM was noted for. Having said that, however, Vincente Minnelli does some beautiful things in the film.

The most famous scene is the ballroom scene, where Emma and Charles have been invited to the Marquis D’Andervilliers’ house. Charles is clearly out of place, but Emma is in her element. It is the high point for her, where she has temporarily achieved her dreams, the Cinderella at the ball with Louis Jourdan’s Rodolphe Boulanger as the prince charming. The way Vincente Minnelli films it, it is a delirious dance, spinning around so that the audience feels every bit as dizzy, dazzled and disoriented as Emma does.

I also liked Minnelli’s use of mirrors. Emma sees herself in the gilded mirror at the ball, surrounded by admiring men. In a later seen, having a tryst with a humble clerk living well above his means, Leon Dupuis (Alf Kjellin), who is also madly in love with her, she looks at the cracked mirror in her cheap hotel and wonders how she came so low. She views herself through mirrors, it seems, as she appears in her surroundings rather than who she really is as a person.

Another moment that stood out to me was when Rodolphe Boulanger is attempting to seduce her at the local fair. They are inside a building while just outside the windows, speeches are being made about agriculture. Rodolphe speaks words of love and the speaker calls out for more manure. It was the most striking examples of the mismatch between her romantic illusions and reality.

This movies seems to have reminded me of a lot of different movies and books, because I also couldn’t help comparing it to Letter From An Unknown Women, which also stars Louis Jourdan as a womanizer. The leading lady (played by Joan Fontaine) also entertains romantic illusions that are out of step with reality, though in the case of Letter From An Unknown Woman, her illusions are centered on one man rather than a more inchoate future. Emma’s dreams don’t require any particular person 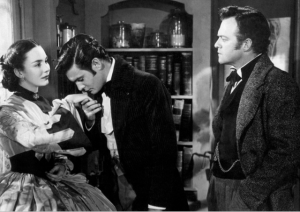 I also have to say a word about Emma’s wardrobe. Perhaps symbolic of her dreams, her wardrobe always seems to be out of all proportion to her surroundings. I kept wondering how her husband was affording it. As it turns out, he wasn’t and her inability to pay for her clothes turns out to be very important in the plot as she falls prey to a predatory draper, which precipitates her ruin. But when Charles first sees her in her humble farm house, she is festooned with ruffles and bows and whatnot. She looks like a lady in waiting deigning to visit her humble tenants.

Because the story of Madame Bovary is about an adulterous woman, there were some objections made by the Production Code. To make the story acceptable, . Gustave Flaubert’s real-life obscenity trial was used as a framing story. James Mason plays Flaubert and explains to the court how his story is true to life and also quite moral. The result of his narration means that the film is given a slant towards blaming the creators of romantic literature and expectations for her fall…rather like Cervantes does in the first half of Don Quixote. It has made me very curious about the novel and what the differences are.

Thanks so much to Love Letters to Old Hollywood for hosting! For more posts on Vincent Minnelli, be sure to check out “The Vincente Minnelli Blogathon.” 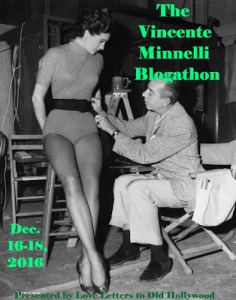 Posted by christinawehner on December 16, 2016 in Movies