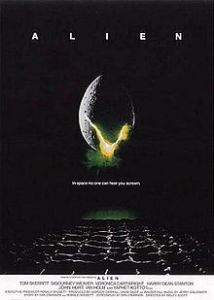 I recently watched The Horror of Dracula (1958) with Christopher Lee and Peter Cushing. I watched it with my cousin, who hasn’t been exposed to too many classic films, and he really enjoyed it. But afterwards, he said that if I liked that sort of thing, I should really watch Alien. I must confess I was skeptical. Alien is a science fiction film and I don’t generally like science fiction. However, I figured I might as well try it, especially since I had once been skeptical about classic horror films and now love the genre.

And Alien does have a touch of the classic horror about it. James Cameron, when he made the sequel, Aliens, said that he was going for more terror, whereas the original is more horror. And Alien, I discovered, is not a typical science fiction film. It’s more like a film noir/thriller that happens to be set in space. It is truly worthy of Alfred Hitchcock, though perhaps with a little more terror.

Alien doesn’t have a complex plot and what is there is pretty patchy, but that’s not really the point of the film. There are seven people on a cargo spaceship returning to earth. What it carries is not important. Who these people are or what their past is is not important. What kind of world has produced this ship is not important; the film feels both futuristic and contemporary. They are all anxious to get back to earth, but they pick up an unknown signal from a planet and protocol dictates that they investigate. They do so and while on the planet, an alien life form attaches itself to the face of one of the members. Against protocol, they bring him on board ship, with the alien still attached.

The alien detaches itself from his face and the crew think they are in the clear. But it turns out that the alien has only used the man as an incubator and soon a new alien comes bursting out of his stomach in all its glory. It proceeds to terrorize and pick off the remaining crew while they try to hunt it through the ship’s dark, shadowy, claustrophobic corridors and air shafts.

The trouble is they are not soldiers (my sister called them glorified truck drivers, essentially) and the alien, instead of having blood, has corrosive acid flowing in its veins that can eat through layers of ship. It also grows much larger than when it originally pops out of the guys stomach.

The film is a masterpiece of suspense. From the moment the film begins, from the moment we first see the credits, and hear the music by Jerry Goldsmith, we are holding your breath, expecting something to happen at any time. As the credits continue the camera moves around the grimy ship, which looks deserted, and the audience is wondering if a catastrophe has already occurred.

It is not obvious, at the beginning of the film, who the main protagonist is going to be. All seven characters are introduced with roughly equal screen time and importance. There is the captain, Dallas (Tom Skerritt), the Science Officer, Ashe (Ian Holm), the Warrant Officer, Ripley (Sigourney Weaver), the two engineers, Brett and Parker (Harry Dean Stanton and Yaphet Kotto), and Kane (John Hurt) and Lambert (Veronica Cartwright). But when the captain, Dallas, and the Science Officer, Ashe, make the decision to override Ripley’s warnings about bringing the alien on board, Ripley slowly emerges as the one we care most about.

There is also an adorable cat named Jones, or Jonesey. I was rooting for this cat to survive from the very beginning and was in a constant anxiety that we would lose him (for fellow cat lovers, the cats survives).

Much has been said about the screenwriter, Dan O’Bannon, and the symbolism in the film regarding how the alien symbolically commits a form of rape (on a man) and impregnates him, with the alien bursting forth in violent birth. However, what really stood out to me was the characters’ isolation from each other. Here are people who have been on the same ship for months, perhaps years (they’ve been in stasis for much of the journey, though) and they don’t seem to particularly care for each other. There is no warmth in the film, no connection between them. The warmest relationship is between Ripley and the cat, Jones.

There is a lot of tension, admittedly. Ripley is deeply distrustful of Ashe and his motivations and decisions. She also attempts to get Dallas to use his authority to override Ashe, but Dallas rather apathetically says that Ashe is in charge of science on this journey and he can’t do anything.

That apathy really struck me. Dallas, in particular, seems to suffer from it. These people just want to get home and even when the alien is running about their ship, there is still a sense of unreality, as if they cannot believe this is happening to them. Dallas seems an insouciant captain. Ashe wants to study the alien and is at odds with Ripley, the only person who demonstrates any mental sharpness (for those who don’t mind a few more spoilers, Ashe turns out to be an android who has been programmed by the nameless “The Company” they work for to bring home this kind of alien life form for study, even at the cost of the crew).

I have to believe that the director, Ridley Scott, meant for the crew to come off disconnectedly. It certainly makes for a great story, but is a disturbing representation of humanity. The story could be told thus: on the ship there is apathy, disunity. A threat comes and they can’t pull together to defeat it. Instead, they are picked off, pulled apart. In the end (more spoilers) it is only one individual who can survive. Only alone, does Ripley make it.

Ripley and the alien

There is a rather bleak moment after Kane has died, after the alien jumps out from his stomach. The crew is in shock, while Dallas is about to eject Kane’s wrapped body into space. He asks expressionlessly if anyone wants to say anything (usually it is a captain’s job to say something). No one says a word and Kane’s body is released from the ship. That’s it. It’s such a bleak moment because no one mourns him, there’s not even music to mourn him. You can see they’re still in shock, but you can also see they are thinking about what is going to happen to them. He’s just dead and that’s the end of him.

That sense of isolation is a very noirish element. The crew is made up of a bunch of misfits, which actually make sense. The only kind of person who would volunteer for a regular job where the journey is so long you stay in stasis for ten months is bound to be a bit of a misfit.

But what really makes the movie so thrilling is the suspense. Crew members walk down dark, shadowy corridors looking for the alien, while the audience waits, heart pounding, knowing the alien is going to get them, but not sure when or how. Some people have commented that it’s a bit like Agatha Christie’s And Then There Were None.

But despite the isolation in Alien, you do still root for Ripley (though I was completely expecting everyone else to die and probably would have been disappointed if they hadn’t – thus Alien feeds our more ghoulish nature). Her character is warmed up by her affection for Jones and because she is the only one who is not either insouciant or in blind terror. She’s a survivor who consistently makes smart decisions…and she goes out of her way to save the cat.

Posted by christinawehner on January 5, 2015 in Horror, Science Fiction, Suspense