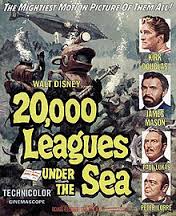 After reading the book, I had to see Disney’s film adaptation of 20,000 Leagues Under Sea. Strangely enough, I never saw it before last week. I have some dim memory of seeing Kirk Douglas playing with a seal when I was a child, but I must not have seen the whole thing. I knew of it more by reputation than anything else. My cousin had very strong opinions about the film: she loved the squid and she hated Kirk Douglas.

But I enjoyed it very much. It is a much tighter story than the book, which is very episodic. In the documentary to the DVD, director Richard Fleischer said that when he read the book, he realized that the best way to adapt the story was to treat it like a jail break on a submarine and try to make everything feel claustrophobic.

The essential story is the same in the movie as it is in the book. Professor Aronnax (Paul Lukas) and his servant, Conseil (Peter Lorre), go on a sea voyage to locate a mysterious sea creature that is destroying ships. But what they encounter instead is a submarine and when they fall overboard, along with bombastic and hot-headed harpooner Ned Land (Kirk Douglas), they climb aboard the submarine, the Nautilus.

The captain of the Nautilus (James Mason) at first threatens to kill them, but relents when he sees how Aronnax is willing to die with his friends rather than be spared alone. He has a potential purpose in mind for Professor Aronnax. In the meantime, he shows Aronnax the submarine and how it works while Ned Land and Conseil scheme and plot to escape. One of Land’s schemes is to fill bottles with messages about the location of Captain Nemo’s island base (which they found on a chart in Nemo’s room) and send them out into the ocean. He also tries to escape when he is allowed to go ashore on an island, but is chased back by cannibals.

One big difference between the movie and book is that the Nautilus in the movie is not battery powered, but actually a nuclear submarine and Professor Aronnax is far more interested in Nemo’s discovery of nuclear energy and the potential good it could do civilization than he is in studying fish and other underwater wonders and it turns out that the purpose Nemo has in mind for Aronnax is that he might allow the professor to share his secret of nuclear energy with the world. But Nemo is not entirely convinced that the world is ready to handle something so potentially destructive and prevaricates. Meanwhile, Aronnax is appalled to discover that Nemo is actively engaged in sinking the ships of his unspecified enemies – a Colonial power of some sort.

The cast is excellent. James Mason is perfect as Captain Nemo –  I could even see James Mason in my mind while I was finishing the book. He’s still a Byronic hero, still a Count of Monte Cristo of the Seas like in the book, though with a more pronounced Utopian streak in him. Mason’s Nemo seems even more deeply pained by the state of humanity and their propensity to make war and discusses it more often, especially in relation to whether or not to share his knowledge of nuclear power.

Kirk Douglas’ take on Ned Land, however, is quite different. Land in the book is a tall, relatively silent man while Kirk Douglas is more of a blow-hard, a kind of irrepressible rogue. However, I have to admit that the change was probably for the best and makes a nice contrast with the rest of the characters, who are very earnest indeed. The movie might have gotten a touch lugubrious without him…and his interaction with Conseil. He and his unlikely friendship with Conseil provide the bulk of the comedy in the film.

Ironically, it is Conseil who somewhat provides the moral conscience of the film, along with Professor Aronnax. But Aronnax in the movie gets wrapped up in Nemo, at one point even making excuses for Nemo’s behavior, and extremely caught up in the potential of the nuclear energy. It is only at the end that he realizes that Nemo is quite willing to have him and his two friends die along with the Nautilus and crew in a death pact. Not quite as mad as in the book, Nemo is still willing to do anything to protect his secret. Only Conseil consistently sees the need for them to escape, partially for their own sake and partially for Ned, who gets himself in trouble with Nemo repeatedly.

Though Ned does save Captain Nemo’s life during the giant squid attack (which looks pretty awesome, even to this day). It kind of throws Nemo’s carefully nurtured misanthropy into disarray, but ultimately Ned’s earlier actions ensure that nothing positive ultimately comes of it (not that you can blame Ned for trying).

The whole film looks great. The ship is opulent as in the book (though I still wonder why Nemo gets all the cushy stuff – what’s up with his crew? They even have a suicide pact with him!). There is the organ and the library and the artwork, the walking on the bottom of the ocean, getting chased by natives, though there’s no trip to Antarctica. There is still a burial underseas. No Atlantis, but that’s okay (there’s actually an Atlantis in the 1959 film version of Journey to the Center of the Earth, also with James Mason, so at least it made its way into one Verne adaptation). It’s still not a fast-paced movie, but it has the same element that captures one’s imagination that the book has. 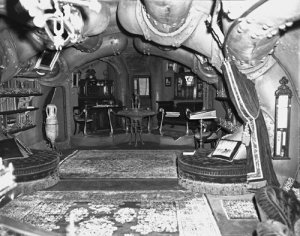 It’s also another fine example of how to adapt a book to a movie; keeping the essential flavor, the essential nature of the characters (except Land) and taking the most important plot elements in the story and constructing a cohesive and exciting cinematic experience.

Posted by christinawehner on September 2, 2015 in Movies