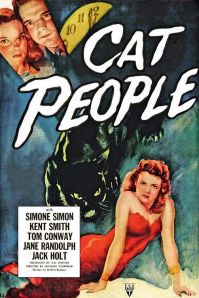 Cat People and The Curse of the Cat People are often evaluated separately as films, but since I watched the two movies back-to-back and they contain nearly the same cast with the same producer, I think it can be just as valuable to analyze the two films together, as two sides of a similar theme.

Cat People was made in 1942. It was the debut of producer Val Lewton for RKO. He had a tiny budget in which to make a horror film, compared to the larger budgets that Universal Studios allotted for their horror films, and so there are very few special effects. In fact, there are so few that it allows for a great deal of ambiguity.

Irena Dubrovna (Simone Simon) is from Serbia and is a fashion designer now living in New York. She keeps to herself and has no friends, living near the zoo where she can hear the roar of the lions and leopards. At the zoo, she meets Oliver Reed (Kent Smith), who is intrigued by her and walks her home. She tells him he is her first friend in America and despite knowing it is a bad idea, she falls in love with him and they marry. But before they marry, she confesses that she is afraid. In her village where she was born in Serbia, there are said to be cat woman; her mother was thought to be a cat woman.

It is said that when a cat woman kisses a man and embraces him (code for consummating the relationship) at some point she will turn into a large cat or leopard and kill him, especially if aroused to jealousy. Irena tells Oliver she is afraid there is evil inside her. Oliver just thinks it’s her excited imagination and believes that after they are married she’ll shake it off. But she doesn’t and because she is terrified that she will kill him, they never consummate the marriage. 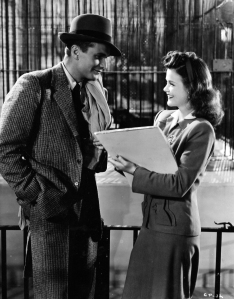 As a result, Oliver grows closer to his co-worker, Alice Moore (Jane Randolph), who confesses that she has always loved him. While Oliver drifts away from Irena, Irena grows more jealous and more desperate, even seeing a psychiatrist, who turns out to be a lecherous creep.

Because of the extremely low budget that Val Lewton had to work with, there is no transformation scene were we can see, incontrovertibly, that Irena is really turning into a cat. It is all done with shadows and illusion, but mostly shadows. However, many people consider this an asset. There are two particularly good moments, when Alice is walking home, followed by Irena, when Alice becomes convinced that something not human is hunting her and we later see some branches of a tree moving, as if a feline had jumped through them. Later, Alice is in a swimming pool in the relative dark, with the water causing distorted shadows on the wall that look possibly like a large cat.

For me, though, it was really a heartbreaking film. Irena knows the truth, she even tells the truth, but no one believes her. In fact, they think she is going insane and at one point talk of putting her away. Irene is so vulnerable, you can’t help but feel for her She knows she ought to be alone so she won’t hurt anyone, but she is unhappy alone and loves Oliver, who never truly loved her,  because he never really knew her. And the tragedy is, like so many Universal horror pictures, she cannot help what she is. 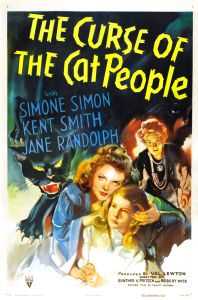 The sequel, The Curse of the Cat People, was made in 1944 and the RKO studio heads wanted to cash in on the unexpected popularity and success of the first film. They made Val Lewton use the title, “The Curse of the Cat People,” even though cat people have absolutely nothing to do with the film. The film is not even a horror movie. It is a psychological, fantasy drama that happens to have the same cast as the original film with characters who have the same past story. It was a very personal story for Lewton and he is said to have put a lot of his own childhood into his portrayal of Amy, the main character.

The film begins many years after Cat People. Oliver has married Alice (Jane Randolph) and they have a daughter, Amy (Ann Carter). They live in Tarrytown, New York, where Washington Irving’s “The Headless Horseman” id set. Amy is an extremely introverted child and her father worries that she spends too much time dreaming and not enough time playing with other children. When she mails the invitations to her birthday party in a tree (which her father had said years ago was a magic mailbox), the children are angry with her for telling them she would invite them and then not apparently doing so.

Amy’s mother is less worried, but Oliver is still haunted by the memory of his first wife, Irena. He now believes that through excessive imagination and obsession, she came to believe something that wasn’t true and destroyed herself and he is afraid Amy will do the same. Amy’s teacher, Miss Callahan (Eve March), thinks that the problem with Amy lies more with Oliver and his unwillingness to believe the things Amy tells him, things that are imaginary, but that Amy fully believes. 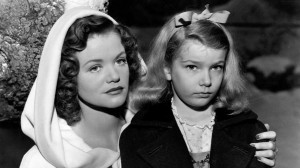 On her street, there lives a former actress, Mrs. Farren (Julia Dean) and her daughter, Barbara (Elizabeth Russell). Mrs. Dean is also lonely and fond of Amy, but is suffering from senility and no longer recognizes her own daughter, who she keeps insisting is an imposter. Meanwhile, Barbara is jealous of how her mother cares more for Amy than her.

Meanwhile, in her loneliness Amy wishes for a friend and the imaginary friend that comes to her is Irena. She comes, she says, from a place full of darkness and peace. Oliver is appalled when he hears that Amy thinks she’s seeing Irena; he feels like Irena has been haunting him and his famil. But Irena is a good friend to Amy and seems to derive comfort from her friendship, too.

It’s very different from Cat People and suffered at the box office when the studio advertised it as a horror sequel and people found that the movie had no curse or even large, scary cats. The Cat People is generally thought to be about female sexuality and anxiety and the second to be about lonely childhood. But there is a thread that runs through both films that hold them together. In both movies, the main character suffers loneliness and isolation. Even Mrs. Farren and Barbara suffer from it. And both characters speak truth and are not believed. At the end of Cat People, Oliver acknowledges that whatever may have happened, Irena had never lied. In The Curse of the Cat People, Oliver doesn’t believe Amy, either. He thinks that insisting that she’s really seeing Irena when she’s just imaginary her is the same as lying and punishes her. 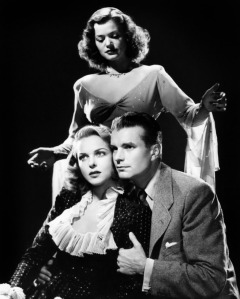 What is interesting is that we are meant to believe Irena in the first movie, but not necessarily to believe Amy in the second. Amy is telling the truth as far as she knows, but we are to assume that it’s not real. In the first movie, someone imagines something terrible that turns out to be true and in the other, imagination stays imagination and is used to bring comfort, though in The Curse of the Cat People, Oliver has talked himself into believing that what happened to Irena in the previous film did not really happen The movies leave it ambiguous, what is real and what is not.

Posted by christinawehner on November 17, 2014 in Uncategorized