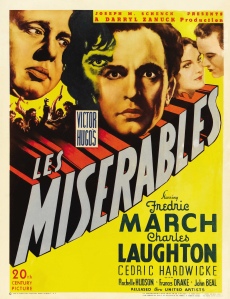 I’ve read that the best Hollywood adaptation of Victor Hugo’s immense Les Miserables (my copy is 1400 pages) is the 1935 version, directed by Richard Boleslawski and starring Fredric March and Charles Laughton. My understanding is that the 1934 French adaption by Raymond Bernard is even better (and five hours), but I haven’t had a chance to see it yet. But the Hollywood version is quite excellent, considering that they squished 1400 pages into 108 minutes. They manage it by taking almost all the characters and turning them into a connected, but peripheral, influence on Jean Valjean as he moves through life, focusing almost exclusively on him and his conflict with Inspector Javert, contrasting the two men and their visions of life: mercy vs. the law.

Jean Valjean (Fredric March) is sentenced to prison for stealing bread to feed his starving sister and her children. He receives five years, but his time is increased to ten when he tries to escape. Prison is brutal and inhuman and when he is released, he is bitter and hardened by the experience. Everyone treats him like a convict, so he begins to act like one, until he meets the saintly Bishop of Digne (Cedric Hardwicke).

The Bishop offers him food and shelter and is the first person to treat Valjean like a human and even when Valjean responds by robbing him, he still forgives him and tells the guards that he had given Valjean the silver plates as a gift and even throws in some valuable candlesticks for good measure. The Bishop tells Valjean that “life is to give, not to take” and Valjean embraces this as his creed, completely transforming his life, always keeping the candlesticks to remind him of what the Bishop gave him and what he owes to others in response. 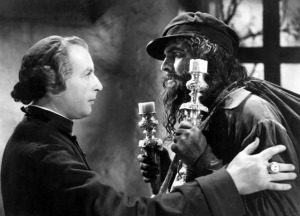 This is all contrasted with Inspector Javert (Charles Laughton), who Valjean first meets as a prison guard. Unlike Valjean, he was actually born in the criminal class, but determined to rise above it by embracing the law. His creed, and he repeats it several times, is “good, bad, or indifferent – it’s no business of mine, but the law to the letter.” In this film, he seems less obsessed with the fact that once a thief, Valjean will always be a thief, than with the idea that the law has gone unfulfilled when Valjean broke parole and therefore must be apprehended to restore balance to the law. It’s like he’s pinned his entire identity on being the man who follows the law that when there’s any irregularity done or grace given, he loses a bit of himself, something demonstrated brilliantly and subtly by Laughton.

The entire movie – though it hits all the highlights of the novel – is really built around three moments of temptation for Valjean and the outcome of those moments. In the first, he considers murdering the Bishop (until he sees his saintly face in the moonlight). By abstaining, the Bishop is later able to forgive him and and offer him a second chance at life instead of sending him back to prison for theft.

The second moment comes after he has established himself as a respectable businessman and mayor under an assumed name. Javert at first thinks he must be Valjean, but another man who looks like him is arrested instead. Valjean is now faced with the choice of letting that man take his place or speaking out. It is only when he looks at the candlesticks the Bishop gave him that he summons enough moral strength to do what is right.

The third moment comes when Javert has once again found Valjean’s hiding spot and Valjean intends to flee with his adopted daughter, Cosette (Rochelle Hudson). But Cosette loves Marius (John Beal), a revolutionary student who is fighting on a barricade during an uprising in Paris. In a unique twist of the film, it is hinted that after Valjean took Cosette away from school, he fell in love with her, though she regards him as a father. But for a brief moment, he is tempted to take her away with him and leave Marius to his fate. Once again, he makes the supreme sacrifice and ventures out into the violent night to rescue Marius and we have the immortal scene that all adaptations manage to include, with Valjean carrying Marius to safety via the sewer – which looks impressively dirty and atmospheric and is a real highlight of the film, with Laughton’s Javert in pursuit.

March and Laughton are both superb. March is a bit young – in his thirties – which could be why the timeline is so condensed from the book. He does not look like an old man who would be on the point of death at the end of the film (in the movie, he is allowed to live); he looks very healthy and even rather dashing, but March brings sincerity and conviction and manages to transition from rough criminal to respectable man of conscience very well. Laughton is likewise good. His Javert has a grain of vulnerability about him. He clings to the law, partially because (as happens at the beginning of the film) his honesty is questioned because of his background. But vulnerability or not, he remains an implacable force and the scenes between March and Laughton are by far the best moments in the film. 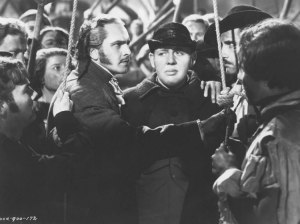 The other characters are diminished, as a result, though it doesn’t hurt the story. Fantine (Florence Eldridge), in particular, her story almost entirely glossed over, except that she wants to be with her daughter, Cosette. The only evidence we have that she has resorted to prostitution is the floozy dress she is wearing. Cosette remains the passive, but important, motivation for nearly every character except Javert. Everyone is doing something because they love her: Valjean, Fantine, Marius. The Thenardiers are almost entirely absent from the film and Eponine (Frances Drake) retains a small role as Marius’ secretary (?), who is jealous of Cosette, but loves Marius too well to see him hurt. Also, look for John Carradine as the revolutionary Enjolras.

Curiously, there is almost no music in the film, except at dramatic moments, like when Valjean and the child Cosette flee Javert or when Valjean carries Marius through the sewers. But it actually heightens the tension during the scenes between Javert and Valjean…and I kept hearing songs from the musical in my head anyway, so I didn’t miss it too much.

It’s well worth seeing, even if you are not a fan of the musical or the book; with a well-told story and great acting by the two leads.

Posted by christinawehner on August 5, 2015 in Movies