890 minutes in length, 20 episodes long, often slow, filmed like a stage play (there is no music) with some actors too old for their roles –  but like Tolstoy’s novel, by the time I had finished the 1972 BBC adaptation of War and Peace I felt like I had really accomplished something. It is, to say the least, the most faithful adaptation of the novel ever committed to film and really allows space to relate to the characters and explore the world and ideas of Tolstoy.

One of the film’s greatest strengths is that we spend so much time with the characters that we can watch them grow and change and interact with each other and by the end we are highly invested in them. Anthony Hopkins plays Pierre Bezukhov, not exactly like he is in the book, but he captures the awkwardness Pierre often feels, as well as his ever searching spirit and inherent kindness. We are able to follow the ups and downs and varying phases in Pierre’s search for his place in life.

Prince Andrei Bolkonsky is played by Alan Dobie and one thing I especially enjoyed about this adaptation is how it portrayed the friendship between Andrei and Pierre. They debate philosophy, discuss love, and it is clear that the two characters care for each other very much, despite being very different and on different paths in life. I didn’t warm to Andrei as much in the novel, but Dobie made him likeable: sincere (it’s a sincere adaptation, everyone is sincere), focused, introverted, earnest. He was able to convey how deeply Andrei feels, but how little he was able to express it and how cold he could appear without ever letting you think Andrei really was a cold man.

Morag Hood as Natasha Rostova is one serious blot on the production, at least for the first two-thirds. The actress was around thirty and had to play Natasha even when she was a child of thirteen, which could be embarrassing to watch and she seemed affected (admittedly, Natasha is a difficult role to play). But surprisingly, by the last third of the series, I actually started to like her – she seemed exactly like I could imagine Natasha being later in life and somehow I left the series feeling more charitable considering the uncharitable things I had originally thought.

Another wonderful aspect of the series is that it brings out two of my favorite characters from the novel, Nikolai Rostov (Sylvester Morand) and Princess Maria Bolkonsky (Angela Down), who always get short shrift in shorter adaptations. When those two are largely removed from a script, it changes the dynamics, pushing the story into love triangle territory. Instead, allowing these five characters to interact, brings added richness to the story, bringing out family resemblances (Nikolai and Natasha are alike, Maria and Andrei share family similarities and background), but also sets up contrasts of character and the different choices people make in negotiating life, falling in love, forming friendships, misunderstanding each other, learning from each other.

Nikolai, in particular, we get to see grow from eager young man to confident officer to responsible husband and farmer (as his mustache and hair grow bushier). I also thought Angela Down did an excellent job making the devout and serious Maria sympathetic and interesting. Showing her father, Prince Bolkonsky, and how he becomes increasingly senile and irrational goes along way towards giving her a context (and though he often seems quite shrill, he was described exactly like that in the novel). 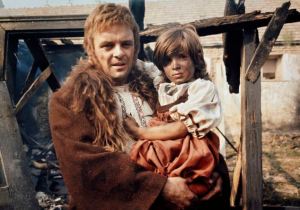 Anthony Hopkins as Pierre, rescuing a child during the burning of Moscow

Sonya is of slightly lesser importance in the book (because she has a lesser developed inner spiritual life than the five main characters, so Tolstoy isn’t quite as interested in her), but still integral to the story and what is curious is just how integral she is to the story. You really see it in a film adaptation, where she is present nearly every time Natasha is (I had a similar sensation watching the truncated 1956 Hollywood adaptation). Joanna David plays her with a bit more spirit, resentment and sadness than Tolstoy actually gives her in the book and it certainly didn’t help that Nikolai’s mother was constantly pressuring her to give up her engagement to Nikolai. To read that the Countess Rostova is persecuting Sonya is one thing, but it is an entirely different to see it and my general good opinion of the countess never quite recovered from the sight.

But the ’72 adaptation does not skimp on the military side of the story. All outdoor sequences were filmed in Yugoslavia. And we get a lot of military discussion. General Kutuzov, Tolstoy’s hero who represents the Russian people and Russian spirit, is somewhat hampered in the film because he gets saddled with a lot of Tolstoy’s thoughts on history, but the actor (Frank Middlemass) did bring out just how old and ill the general was (he’s a martyr in this film). General Kutuzov would, in fact, die only months after pushing the French out of Russia and in this performance I believe it. There is also quite a bit of Napoleon, who (played by David Swift) is a posturing man who likes to hear the sound of his own voice and believes he can do no wrong (which is pretty much how Tolstoy viewed him). It did take me aback, however, that Napoleon had a British accent (though it shouldn’t have – everyone has a British accent in this one; it’s a very British production).

It is, as I said, often very slow, but the very slowness of the pacing brings out some perhaps unintended truths. We spend so much time with soldiers marching, wounded be carted away, soldiers waiting, soldiers charging, cameras always at ground level, that it actually succeeded in robbing war of its glamour and brought a greater sense of reality, both the long moments of boredom as well as the moments of confusion. There are none of those sweeping camera shots that make war seem exciting. In this film, war is a bloody and awful drudgery, not especially heroic, executed by individual men. The series also succeeds in humanizing both sides, both the French and the Russians, which is something that also comes out in the novel.

Almost all of Tolstoy’s minor characters are given their due. The inner lives of characters are also illuminated through a voice-over of the actor thinking to themselves. We see Tolstoy’s vision represented through the choices people make. It all adds up to a remarkably rich experience.

The adaptation is somewhat difficult to get into at first. I tried watching it years ago and didn’t even get past the first episode. I think it helps to read the book first. It starts out slowly (like the music playing during the credits, “God Save the Tsar”) and builds to a tremendous crescendo. It has a limited visual scope, but the emotional scope and characters turns out to be tremendous.

Posted by christinawehner on January 22, 2016 in Movies, Uncategorized