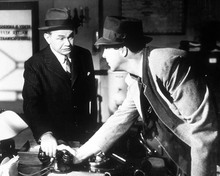 Last week I watched Double Indemnity with my good friend, Andrea. Double Indemnity might actually be my favorite film of all time, so I am always burbling away happily about the film and referencing it, but Andrea does not generally watch murderous stories. But I spoke of it so often, she was curious and after I sent her a few clips from the film, she was even more curious, so finally we decided to watch it. In turn, I was exceedingly curious to know what she would think. She has kindly given me permission to quote her extensively (or paraphrase, somewhat).

Her reaction? She liked the dialogue, which she found poetic (a word that would not have occurred to me to use in reference to a film noir, but she’s right about it – there is a cadence and rhythm and poetry to it). She also didn’t mind at all about the murder, because, she observed, the movie isn’t really about the murder. Instead, she compared Double Indemnity to a Shakespeare tragedy and “Macbeth,” (I once read someone describe “Macbeth” as the film noir of Shakespeare) with a frail man striving to achieve something great and failing spectacularly.

But what is it that Walter Neff is trying to achieve? I put it down to “money and…for a woman,” but Andrea has a unique perspective that changes the dynamics of how one views the film.

She sees the story as essentially a rivalry between Walter Neff and Barton Keyes. As she observed, Keyes often belittles Neff’s job as an insurance salesman as a “peddler” and a “backslapper” and wants Neff to work with him as a claim’s manager, where it takes “brains.” And Keyes is the acknowledged brains, almost a colossus, a titan of brilliance and human insight. But, as Andrea points out, Walter already considers himself a smart man, quick on his feet, good at his work. He admires Keyes, he is a friend of Keyes, but he also subconsciously wants to best him and to work with Keyes in claims management would not only be a cut in salary, but would also make him subordinate to Keyes.

In that respect, he was ripe for a Phyllis Dietrichson to come along and give him a reason to match wits with Keyes. He tells Keyes in his memorandum voice-over that it was something he’d already been thinking about; how he could con the insurance agency because he’s inside the system and knows how it works. It’s basically a game to him, which is why he gets so uncomfortable every time he’s around Lola. She reminds him that murder is not a game. But this mentality of trying to pit wits against Keyes also causes him to underestimate Phyllis. She’s not playing a game, either. 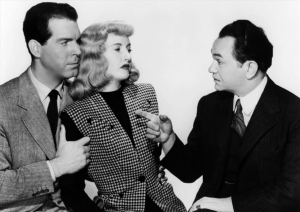 Andrea also noticed that after Keyes figures everything out (he can’t prove it yet, but he’s figured out how it was worked) Walter suddenly wants to pull out and tells Phyllis so. The money and lust for Phyllis isn’t really enough to keep him going. It was the rivalry with Keyes. But of course Phyllis has no intention of pulling out and threatens to take him down if he doesn’t go through with it. I used to assume it was fright that made Walter suddenly lose his nerve; he doesn’t have the psychopathic nerves of steel that Phyllis has. But Andrea has another theory. Walter loses his nerve because he’s lost the game. He’s lost his main reason for committing a murder. It is now clear that Keyes is smarter than Walter, he has figured it all out. The game is over and Walter is now stuck in a very awkward situation that could get him executed. But Phyllis has no intention of letting him out so easily.

Ironically enough, Walter fails because he is weak, both too moral and not moral enough. He can kill a man, but goes soft concerning Lola. He is caught between two titans of strength, who are strong because of their extremes of good and evil. In contrast, Walter is just a man, with the usual mix of good and bad impulses. If he’d been like Phyllis, then they might have been able to wait Keyes out, who didn’t really have any proof. But, as Andrea says, he’s just playing a game and when the game is over, he no longer has the will to try to outlast Keyes.

I still wonder – assuming Walter had been more hardcore – if Keyes could have exposed Phyllis. I’m not sure that he could. She would never crack under police pressure or under pressure from a lawyer and I’m sure would make a very good impression on the witness stand. Walter is the weak link for her. The poor guy is just too human.

Posted by christinawehner on March 25, 2016 in Movies