The Many Manifestations of “Pygmalion”

I seem to be obsessed with all things Pygmalion.

“My Fair Lady” (musical) 1959 London Cast Recording, again with Julie Andrews and Rex Harrison (one can’t have too much Julie Andrews)

The play, by Shaw, is a modern retelling of the Pygmalion story from Ovid’s Metamorphoses: a long, Roman poem published around 8 AD. In Ovid’s telling, Pygmalion hates women, but creates a statue so beautiful that he falls in love with it. He asks the goddess, Aphrodite, to make the statue come alive and he then marries his creation.

But George Bernard Shaw turns the original tale around. In his version, the “statue” achieves independence from her creator and many critics consider the play to have distinct feminist undertones, as well as being an ironic anti-romance.

The Pygmalion character is Professor Henry Higgins, an arrogant, narcissistic, though brilliant, phonetics teacher. The sculpture is Eliza Doolittle, a poor girl who sells flowers on the street and speaks with a Cockney accent. Higgins believes that all that is really separating the classes is their manner of speech and boasts that he could take anybody – in this case, Eliza – and teach her how to speak and act properly and then pass her off as a duchess.

Eliza wants to break out of the limitations imposed on her life – if she spoke better English she could work in a flower shop instead of on the streets – and tries to hire Higgins to teach her. However, Colonel Pickering, a friend of Higgins who is also interested in phonetics, wagers the cost of the lessons that Higgins can’t actually pass her off in society. Higgins takes the bet and months of grueling work ensue for all three of them. In the end, Eliza is triumphant, but is not acknowledged or given her due by Higgins, who feels that he did all the work and made her what she now is. A series god complex.

In Shaw’s play Eliza rebels and leaves, even when he asks her to stay, and Shaw was quite emphatic that she stayed gone. But from the very beginning, there was a tendency to read a romance into the play. The original actor who played Higgins would throw flowers after Eliza left the stage, to indicate that they would later marry. Shaw was so disgusted with the pervasiveness of this belief that he wrote an afterwards to his play, explaining in detail what happens to each of the characters and how Eliza could never possibly marry Higgins. He felt strongly that a romance would undermine the entire point of his play.

George Bernard Shaw was a socialist and was very proud that he was able to insert certain points into a play that could also be successful with the public. One theme was an exposure of the class system, partially maintained by a “verbal class distinction.” By teaching Eliza proper English and the rudiments of polite behavior, Higgins and Eliza completely fool society. She is even taken to be a Hungarian princess and Higgins comments that these “silly people don’t know their own silly business.” The class barrier is demonstrated to be both superficial and oppressive (in how it excludes people and prevents them from moving up – like how Eliza couldn’t work in a flower shop because of her accent). But though they expose the class system, it’s still there. Through Higgins’ heedless “promotion” of Eliza from the gutter, she now belongs to no class.

Nicholas Grene, in his introduction to the Penguin Classics’ “Pygmalion,” also talks about individualism as another theme in the book. Eliza is uniquely herself; that is why she can’t return to Higgins; she is not his creation or, as Mrs. Higgins calls her, his “live doll.” She always was a little different from others, which is why she wanted Higgins to teach her in the first place. And when she declares her independence, it is not as if she suddenly found her courage, since she always was inclined to stand up for herself. Higgins is likewise an individual, almost to an extreme, who cares not at all for other people and their opinions. Grene says, these people never were just ordinary people, they exist outside of any class system.

Gabriel Pascal, a producer and director, somehow talked Shaw into letting him make a film version of his play, with Shaw as screenwriter. However, Pascal insisted on casting Leslie Howard, because he thought he was a more romantic figure. Pascal also managed to get another ending. Eliza leaves, as in the play, but Higgins then realizes how much she has become a part of his life. As he sits, listening to a recording of her voice, she enters the room. He sits up with hope, then leans back and pushes his hat over his eyes and says the lines, “Where the devil are my slippers?”

It works as an ending, despite being against Shaw’s wishes (and Shaw did still like the movie; he approved all the other changes). For one, Leslie Howard really is a more romantic figure in the movie. In the play, Higgins is very attached to his mother and declares no one else measures up. He’s brilliant, but he’s also not quite mature or grown up and truly seems not to have the ability to understand that people have feelings. Leslie Howard does not project this lack of maturity in the same way and is more believable as a possible lover. 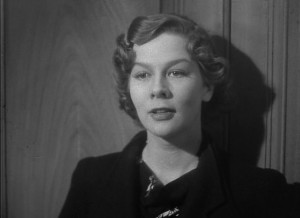 Also, Wendy Hiller (who played Eliza on stage at one point) definitely sells it at the end when she realizes exactly why she need no longer be in awe of Higgins or crave his approval. There is a new look in her eye when she tells him she doesn’t have to put up with his treatment of her, so even when she comes back, there is still that look in her eyes and you know things will never be the same between them. One imagines a tempestuous romance ensues.

I like Audrey Hepburn a lot as an actress, but she’s too fragile, ethereal, elegant, somehow, to quite pull it off opposite Rex Harrison. I don’t quite believe her when she sings “I can do without you” (actually, Marni Nixon sings it, Audrey Hepburn acts it). As a result, when she comes back at the end, it looks like a defeat on her part rather than a victory. With Wendy Hiller, it was definitely her victory.

And although I will never be able to see it, I bet Julie Andrews made it a victory, too. When I think of the roles she played (Mary Poppins, Maria Van Trapp, not shrinking violets) I could see how she could hold her own against Rex Harrison and, by all accounts, she was dazzling in the role. I shall probably never cease to regret not being able to see her as Eliza Doolittle, and no matter how much I enjoy My Fair Lady, there’s always that little regret in the back of my mind that keeps me from absolutely loving the movie.

But I absolutely love the music. It has been considered one of the greatest musicals ever – the perfect blend of music, lyrics, book – written by Alan Jay Lerner (books and lyrics) and Frederick Loewe (music). It was a wildly successful musical and when it went to London, it was ecstatically received there, too. And the music so well matched the lyrics, many taken from the play and movie, that when I read the play or even watch Leslie Howard deliver his lines, I half expect him to start talking/singing There is so much irrepressible joy in the music – Shaw wrote an anti-romance, but “My Fair Lady” is all romance.

Irony is often misinterpreted, so perhaps Shaw’s ironic anti-romance was always going to be misinterpreted; and there is just something about the story, an irony of a fairy tale, that captures the imagination. The play overflows with sparkle and life, one area that the musical is brilliant in expressing; and in that way I do maintain that “My Fair Lady” is not a betrayal of Shaw. Lerner and Loewe capture many of his themes – class, individualism, etc. – and it was the musical that made me want to read the play. Both the musical and movie, I feel, bring out something slightly different and will always point back to Shaw. It’s like Pride and Prejudice – it’s been imitated, expanded on, adapted numerous times, changed, reinterpreted, and yet we always come back to the original work by Jane Austen. It’s the sign of true timelessness.

Here is an interesting article on TCM about the 1938 film Pygmalion, that discusses more about the making of the film and Shaw’s reaction to it.

The closet I’ve ever come to seeing Julie Andrews as Eliza Doolittle: her 1961 performance of “Wouldn’t It Be Loverly” on the Ed Sullivan Show.

Posted by christinawehner on March 25, 2014 in Books, Movies