What Kind of an “Old Fashioned Girl” are You?

I’ve been listening to two diametrically opposed songs about being “old fashioned,” so I have thought I would share these two songs and ask people which one they most identify with? You can even say both or none!

“I’m Old Fashioned” was composed by Jerome Kern, with lyrics by Johnny Mercer for the movie You Were Never Lovelier, starring Fred Astaire and Rita Hayworth. Rita Hayworth’s character sings the song, but her voice was dubbed by Nan Wynn. The song is then followed by a lovely, romantic dance between Astaire and Hayworth. Simply gorgeous.

I absolutely cannot resist this next song. “Just an Old Fashioned Girl” was written by Marve A. Fisher and is most associated with Eartha Kitt. Younger generations might know her for providing the voice of Yzma in The Emperor’s New Groove, She also played Catwoman in the TV series Batman in 1967. This song is utterly, wickedly delightful.

So, which kind of an “old fashioned” person are you? I confess that I probably am more old fashioned in the Jerome Kern/Johnny Mercer fashion, but secretly wish to be old fashioned like Eartha Kitt.

Posted by christinawehner on March 27, 2019 in Music

Yesterday was Doris Day’s birthday – were she just discovered she is truly 95 and not 93 as she had thought – and in honor of her birthday, Love Letters to Old Hollywood has hosted “The Doris Day Blogathon,” which I am delighted to participate in with this tribute to Doris Day as singer.

I’ve always loved Doris Day as an actress, but one of the remarkable things about her is that even if she had never been an actress, she would have deserved to be remembered as a great singer, one of the most popular of her era. She was singing number one hits on the chart before she had even become an actress (click here for a look at her chart hits and discography).

Doris Day originally intended to be a dancer, but when an accident left her temporarily disabled, she turned to singing. She would listen to Ella Fitzgerald and try, as she said, “to catch the subtle ways she shaded her voice, the casual yet clean way she sang the words.” Her teacher taught her to sing as if she were singing into the ear of one person. The result is that she developed one of the most intimate styles of singing that I have ever heard.

She envelopes you in her warm vibrato. She had perfect diction, a beautifully fresh tone, that could also be suggestive, and spellbinding phrasing. But she’s an understated performer, which I believe has led to her being underappreciated. It sounds easy. Her singing has even been called easy listening, but there is nothing easy about it.

Check out her phrasing in “My One and Only Love.” Listen to the way she sings the first line “The very thought of you/makes my heart sing.” She sings it as one phrase, pausing after “you,” but not breathing, only to swoop up vocally on “makes my heart sing.” Such phrasing is only possible with perfect breath control and technique. I tried imitating her, which only increased my appreciation of her.

She was also a mesmerizing performer and no one could put across a song quite like her. When showing the movie Love Me or Leave Me to my cousin, she remarked on how the camera rarely moved while Doris Day was singing. As she said, it didn’t have to. Doris Day draws you in, just sitting there singing, and anything else would be a distraction (listen to “It All Depends on You for an example”). She demonstrates the exact same thing in her version of “The Way We Were.” Her ability, without histrionics, without much movement, to tell a story and convey feeling is marvelous. But this subtly has also, I think, contributed to her sometimes being underappreciated as a singer (as well as the way people association her with more upbeat song).

Although primarily known for singing popular music, Doris Day was also a fine jazz singer and it has been remarked be a number of people that she could have been one of the greatest female jazz singers if she had pursued that path. Here is a jazzier song from her discography, called “You’re Just Too Marvelous,” which she sang in the film Young Man With a Horn. The trumpet player is Harry James.

Of course, in a pinch she could also belt out a song Broadway style, as she proved in Pajama Game.

Absolutely stunning singer! I never get tired of listening to her.

Thanks so much to Love Letters to Old Hollywood for hosting! And Be sure to check out all the other posts about her life and career and films. 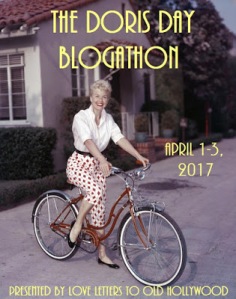 Posted by christinawehner on April 4, 2017 in Music

“My Funny Valentine” was written by Richard Rodgers and Lorenz Hart for the musical “Babes in Arms” in 1937. Oddly enough, the song did not make it into the 1938 film adaptation with Judy Garland and Mickey Rooney (they passed up having Judy Garland sing that song!), but has since become a standard. And since today is Valentine’s Day, here are a number of interpretations of this lovely song.

Posted by christinawehner on February 14, 2017 in Movies