Starring Tyrone Power, Anne Baxter, Cecil Kellaway, Lee J. Cobb, Jayne Meadows, and directed by Henry Koster (the man who directed many of the Deanna Durbin musicals and movies like Harvey, The Bishop’s Wife, and The Inspecter General), The Luck of the Irish is an unpretentious and surprisingly low-key comedy.

Stephen Fitzgerald (Tyrone Power) is a reporter who has been freelancing in Europe and earning very little for his efforts. He’s been hired, however, by publisher David C. Auger (Lee J. Cobb), an extremely successful man known for his unscrupulous methods, who now wants to move into politics. Stephen’s friend, Bill Clark (James Todd), doesn’t approve. He thinks Stephen’s selling out his principles for a big paycheck and job security. While the two of them argue about it on vacation in Ireland, they drive over a rickety bridge that collapses and their car sinks into the creek, stranding Stephen and Bill in a small Irish village with an inn and not much else, though the inn turns out to be run by Anne Baxter as Nora.

When Stephen sees a man (Cecil Kellaway) sitting by a waterfall (that all the inhabitants of the village swear doesn’t exist), hammering shoes, he is told that the man is probably a leprechaun and that if Stephen catches him, the leprechaun must give him his pot of gold. Stephen doesn’t exactly believe this story – he thinks it’s a prank – but when he does catch the leprechaun and is offered a pot of gold coins, he is surprised and refuses to take it.

Cecil Kellaway and Tyrone Power look at the pot of gold

He returns to New York and starts work for Auger, writing speeches and articles. He discovers, also, that Auger’s daughter, Frances (Jayne Meadows), was instrumental in getting him hired and has clearly decided that Stephen is the man for her. He’s uncomfortable with the very modern apartment she’s decorated for him, and though he tells Auger that he intends to maintain his own principles, he soon finds out that in working for Auger his principles must be sacrificed. You can’t write speeches for a candidate whom you disagree with without sublimating your own opinions and endorsing his.

But just as he is settling into his new life, the leprechaun shows up, claiming to be from the employment agency. His name is Horace and he is determined to serve Stephen in every way he can (though he doesn’t really know how to mix drinks, but he chauffeurs pretty well). He doesn’t actively sabotage Stephen and his burgeoning romance with Frances. He is really more like Jiminy Cricket; he represents Stephen’s conscious, reminding Stephen of what is really of value in life. Horace is not, however, above a few machinations to ensue that Stephen and Nora meet again in New York.

What I really liked is that it’s not about trading your soul for success; it is a much more personal story. It is about Stephen, who is trading his soul for success. He has definite principles, but somewhat weak character. He badly wants to settle down and live a particular lifestyle and earn good money and is willing to suppress the things he believes in to do it. Horace points out to him that it is important who you serve (Horace is speaking of himself, serving Stephen, but it is a clear metaphor for Stephen working for Auger). The person you serve is who you end up being like, whose principles you end up living by, whose interests and concerns become your interests and concerns. 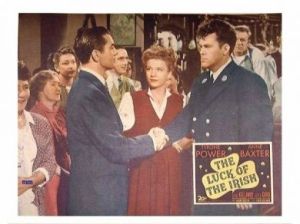 The film also manages to avoid the trap of demonizing Auger and especially Frances (who manages to come across as more than just a heartless schemer). The focus is instead on Stephen and his decisions in life.

Cecil Kellaway is delightful as the irrepressible leprechaun, with a little hop-skip in his walk and an impish twinkle in his eye. I was expecting a slightly more fantasy-ish film, but it’s surprisingly grounded, despite the presence of a leprechaun. The focus is less on any magical things he can do and more on his very presence and his friendship with Stephen. And Tyrone Power is good as the principled, but vacillating Stephen who is confused about what he really wants, but remains likable throughout.

It’s not a screwball comedy, with lots of slapstick (though there are a few falls on Stephen’s well-polished floor). It’s more the incongruity of having a leprechaun in New York that provides the humor. I had no particular expectations for the film, so I was agreeably surprised. It’s a fun and satisfying movie that doesn’t try to be anything more than what it is.

Posted by christinawehner on May 20, 2015 in Comedy, Fantasy