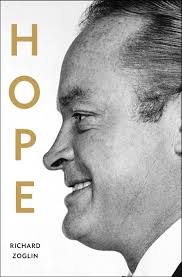 Published in 2014, Hope: Entertainer of the Century is a first-rate biography of Bob Hope, who truly was an entertainer of the century. He was born in 1903 and died in 2003. His career spanned vaudeville, Broadway, radio, movies and television and he was at the top of every single medium (except Broadway – he was successful, but did not stay long and was never in the lead role). His career began in the 1920s and he finally retired in 1996.

The author, Richard Zoglin, argues that Bob Hope has been somewhat unfairly forgotten. He believes that he practically invented the stand-up comedy style, but very few comedians ever acknowledge his influence (with the exception of Woody Allen). Partially, he says, it is because it took Bob Hope too long too retire and he came to be seen as fuddy-duddy, conservative and even reactionary.

But Bob Hope was extremely hip when he first made it into movies in 1938. He started local in his native town of Cleveland, Ohio (though he was born in England, the fifth of seven sons), dancing and doing shows until he went on the road. He began with a partner, but eventually became a solo act and the highest earning vaudevillian in the early thirties. In 1934, he turned to radio and by 1940 he had even topped famous radio personalities like Jack Benny in the ratings.

He signed with Paramount Studios, but it took them a year to  figure out what kind of movies to put him in. His first good movie was the 1939 The Cat and the Canary, followed by The Ghost Breakers and The Road to Singapore, which began his collaboration with Bing Crosby and Dorothy Lamour. There would be seven Road To movies in all.

The Road To movies were my introduction to Bob Hope as a child and I still love them. Bob Hope and Bing Crosby are always playing vaudevillians (and they do acts reminiscent of Bob Hope’s vaudeville days). There are the great contemporary songs written by Johnny Burke and Jimmy Van Heusen. Usually, Crosby will get a romantic song and Hope and Crosby will do a buddy song, as well as a vaudevillian song. Dorothy Lamour also sings a song. There is the constant (good-natured? they almost kill each other several times) rivalry.The costumes are always done by Edith Head and are some combination of beautiful, exotic and outlandish. And there is the constant breaking of the fourth wall: jokes poking fun at Paramount Studio, other actors, contemporary events, each other’s movies and personalities, and even the very act of making movies. I’ve found that the more I learn about the movies and events of the 1940s, the more I appreciate their jokes.

Bob Hope, both on radio and in movies, was something new. He was brash, energetic, fast talking, cocky, always on the make, with the humor often directed at himself. Even when he was no longer new, he was still popular. He moved to television in the 1950s and topped the ratings there. He also hosted and co-hosted the Academy Awards fourteen times, with his first in 1941 and his last in 1978 and including the 1953 Academy Awards, the first to be televised (can be viewed here).

Bob Hope is also remembered for entertaining the troops. He began during WWII, when he did a several month tour in Europe and the next year did a tour in Pacific. He would also entertain during The Korean War, The Vietnam War (garnering controversy), all the way up the the Persian Gulf War. He was sometimes criticized for using the troops to boost his own popularity and to make money, but Zoglin argues that there were far easier ways to do that. Conditions were rough when he traveled and he often lost money. He went through some rough flights, was in several cities that were bombed heavily by the Nazis and during the Vietnam War the hotel he was supposed to stay in was sabotaged. It was learned later that the Viet Cong and meant to kill him in the attack.

His reputation suffered during the Vietnam War. He supported the war and had some harsh words for the protesters (he was a good friend of Johnson, Ford and especially Nixon – he played golf with all the presidents from Johnson to Clinton, except Carter who did not play golf – it seems practically a prerequisite that you play golf to be president). He was also considered no longer in touch with the younger generation and did not really change his comedic presentation as he grew older. 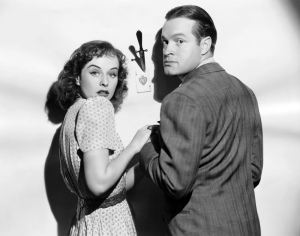 Paulette Goddard and Bob Hope in The Ghost Breakers

The book wisely does not focus too much on his private life, partially because he did not have much of a private life. Not even his four children (he and his wife, Dolores, adopted) knew him or even saw him much. He was married for 70 years, though he was an extreme philanderer. But what he mostly did was work. He hardly ever took a break and even when he was in his eighties people marveled at his energy and schedule. He would pack his week so full of shows and travel that most young people would have hesitated to undertake. He never seemed to suffer from burnout. Occasionally he had to slow down, but not for long and not often. He was the original energizer bunny.

One thing I appreciated was that Zoglin never falls into the biographer’s trap of thinking he has a special understanding of his subject and he does not try to analyze Bob Hope too much. He simply takes the man as he was. It is a respectful biography, not hagiographic or smutty. Bob Hope was a professional and he loved his fans and was conscientious about responding to letters. He could be demanding, loyal, distant, friendly, self-absorbed, a shrewd business man, a master at crafting his image, not a warm man. It was all about him and his career and his wife supported him in that.

Hope: Entertainer of the Century is not only a good biography, it is an interesting panoramic of entertainment in the 1900s, from vaudeville to radio to Broadway to movies to television. Few men embody the sweep of how entertainment was presented to Americans better than Bob Hope.

Posted by christinawehner on June 3, 2015 in Biographies