Our Mutual Friend is Charles Dickens last completed novel (he would die before finishing The Mystery of Edwin Drood), serialized in 1864-65. My first introduction to the story came with the 1998 BBC adaptation, which is excellent, and it has remained one of Dickens’ novels that I enjoy the most.

Some critics have said that the River Thames (always just called “the river” in the story) is the true main character of the book. Filthy and polluted, the river is a source of both life and death. People earn their living on the river, drown and are resurrected in the river, follow the river towards their destination. It seems to contain all that is both good and horrible in England and much of the story and characters are connected to it in one way or another.

On the death of the old miser John Harmon, who made a fortune with dust mounds (he basically collected, removed and recycled rubbish), his long-banished son, also called John Harmon, must return to collect his fortune. But in order to inherit, the will indicates that he must marry a young lady called Bella Wilfer, whom he has never met. But a body is found in the river and it is believed to be his body. The money then passes to Mr. and Mrs. Boffin, good and unpretentious servants to Harmon.

As in all Dickens novels, it’s difficult to summarize his books because there are so many characters, whose plots weave in and out of each other’s. The body in the river is found by Gaffer Hexam, who earns a living stealing from the bodies he finds in the river. His daughter is Lizzie, who attracts the interest of the usually bored gentleman, Eugene Wrayburn. Lizzie also attracts the interest of her brother’s “decent” headmaster, a man who has been called the Norman Bates of Victorian literature: Bradley Headstone. Everything about him is described as decent, yet nearly everyone who comes into contact with him can palpably sense that something is off.

Mr. Boffin soon acquires a mysterious secretory named John Rokesmith, who falls in love with Bella Wilfer. Rogue Riderhood, who claims to be “a[n] honest man as gets my living by the sweat of my brow” working on the river, in reality lives up to his name of Rogue. The Jewish Mr. Riah is Dickens’ attempt to atone for creating the evil Jewish Fagin. Riah is kind and sympathetic and becomes the surrogate father to Jenny Wren, a friend of Lizzie’s. Mrs. Higden is the poor woman who possesses a horror of the workhouse. Con artists, villains, innocents, and unforgettable characters abound.

Besides the river, another theme that seems to be consistent throughout the entire story is that of stalking. Everyone seems to be stalking someone, whether for good or ill. Stalking them, watching them, loving them from a distance, resenting them, searching for them, testing them. At one point Bradley Headstone is stalking Eugene Wrayburn, who is looking for Lizzie. The line between love and obsession seems a thin one at times.

Another theme, of course, is that of greed and the corrosive effect of it on people. Greed and lust for money – miserliness once one has money. Not to mention murder, jealousy, lust, greed, hatred, obsession, indifference…

Perhaps one of my favorite parts of the novel is this quote from Mr. Twemlow, an insignificant member of Society (Society being an entity that requires capitalization) who startles everyone by bursting forth at the end of the book after spending eight hundred pages being passed over and ignored and used more as a useful appendage at Society gatherings. I like this quote because it provides a more expansive definition of love. Love is a word used so often that it becomes nearly meaningless, but Mr. Twemlow inadvertently provides a beautiful description of love’s varied facets (which I will put in bold letters). Mr. Twemlow is referring to a marriage contracted by a gentleman to a woman from the bottom of society that has turned Society aghast (operating like a sort of hollow Greek chorus providing commentary on the events of the story, but woefully out of touch and bound by their rules and self-congratulations).

‘A gentleman can have no feelings who contracts such a marriage,’ flushes Podsnap.

‘Pardon me, sir,’ says Twemlow, rather less mildly than usual, ‘I don’t agree with you. If this gentleman’s feelings of gratitude, of respect, of admiration, and affection, induced him (as I presume they did) to marry this lady–‘

‘Sir,’ returns Twemlow, with his wristbands bristling a little, ‘YOU repeat the word; I repeat the word. This lady. What else would you call her, if the gentleman were present?’

This being something in the nature of a poser for Podsnap, he merely waves it away with a speechless wave.

‘I say,’ resumes Twemlow, ‘if such feelings on the part of this gentleman, induced this gentleman to marry this lady, I think he is the greater gentleman for the action, and makes her the greater lady. I beg to say, that when I use the word, gentleman, I use it in the sense in which the degree may be attained by any man. The feelings of a gentleman I hold sacred, and I confess I am not comfortable when they are made the subject of sport or general discussion.’

Gratitude, respect, admiration, and affection live on, though Society is too blinkered to notice. 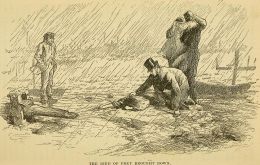 Posted by christinawehner on March 20, 2017 in Books