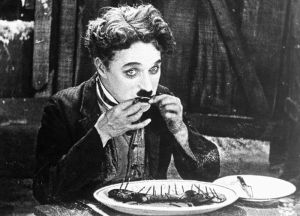 In Silverscreenings article on Dr. Strangelove, she brought out a very interesting aspect of the film, how Stanley Kubrick originally intended his film to be a serious drama, but he kept having ideas for his film that he knew would make people laugh, so he instead turned the film into a comedy. Ultimately, she felt that the humor made his point about nuclear warfare all the more potent.

Humor can serve many purposes. One is simply to entertain and make us laugh (always pleasant). Another is rhetorical, to make someone’s position look absurd. I have to admit to being leery of humor used in this way. Not because it isn’t effective or even funny, but because I always feel like I have to be on the alert that I do not allow the humor itself to change my mind.

But another use of humor, the one Silverscreenings highlighted, has really fascinated me. It is to use humor to make something that is not funny at all more accessible to us. Using humor to help us comprehend something that might otherwise be too horrible to grasp. Two masters of this technique who I have been thinking about recently are Charlie Chaplin and Charles Dickens.

Perhaps the finest example of turning something terrible into an indelible moment of humor is the scene in The Gold Rush, where Charlie Chaplin and his friend, played by Mack Swain, are starving in a cabin during a snow storm. Chaplin cooks his boot and serves it for Thanksgiving and later Swain imagines that Chaplin is a chicken and chases him around the cabin trying to shoot him. It’s funny, and yet starvation is actually horrible. While the German army were sieging Leningrad, the inhabitants ate glue. One reads of stories of people becoming deranged with hunger. During the Stalin-induced famine of 1933 in Ukraine, there were a startling number of people who ate other people.

Curiously, it does not seem like Chaplin exaggerates at all in The Gold Rush. He just made it funny. He took a topic that no one would particularly like to watch and made us watch it. He does the same thing with poverty. 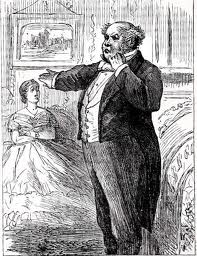 Mr. Podsnap, in the act of sweeping all unpleasantness away

Charles Dickens is another person who uses humor in this way. Not exactly a barrel of laughs, but Beadle Bumble in Oliver Twist could have been a loathsome character (which he really is), but Dickens turns him into a figure of fun, even though it’s clear Dickens hates him and everything he stands for (the workhouse), but even gives him several unforgettable lines (“The law is a ass”). By making Bumble unforgettable, Dickens also makes the workhouse unforgettable.

I’m reading Our Mutual Friend right now, Dickens’ last completed novel, where we meet the wealthy Mr. Podsnap, who has a trick of using his arm to metaphorically sweep all unpleasant subjects away from him – any subject that would “bring a blush into the cheek of the young person [his daughter].” Hunger, poverty, the existence of other countries other than his own. I think that is what Dickens uses humor to do, to prevent us from sweeping it all behind us.

But it also makes it accessible. Few people would voluntarily watch a movie or read a book about starvation. I’m not sure starvation is something we could fully comprehend (unless we had really gone hungry) or even nuclear warfare. We understand intellectually, but not truly. Humor can give one an “in.” A way to approach the subject and really look at it.

Posted by christinawehner on November 28, 2016 in Books, Movies