The films of Akira Kurosawa are so beautiful, I find myself mesmerized while watching them. He has become one of the most interesting directors I’ve ever seen. Most of his films I’ve seen are samurai films, with their own unique beauty rooted in the past, but High and Low is no less captivating for being set in the contemporary time of 1963.

It’s partly a crime drama, partly psychological, partly a look at economic disparity and despair. Toshiro Mifune is Kingo Gondo, an executive of National Shoes. He is engaged in a high stakes battle to control the shoe company outright and he has mortgaged everything he owns to do it. But when the son of his chauffeur is mistaken for own his son and abducted, Gondo has to decide whether or not to pay for the boy’s safe return. To do so would be to lose everything: his position, his large home, his entire life’s work.

This struggle actually only comprises the first third of the film. It could be divided up into three parts. The first part occurs almost exclusively in Gondo’s living room, which overlooks the city below, including many poor hovels. The second part is mostly police procedural, as the police – led by Chief Detective Tokura (Tatsuya Nakadai) – try to track down the kidnapper. The last third is mostly devoted to the kidnapper himself (Tsutomu Yamazaki). By that time, the film has switched from Gondo’s apartment to the wide, seamy underbelly of the city where cocaine addicts, drug dealers, and the less fortunate live.

The film is almost like Psycho in that way – if Janet Leigh’s character got to meet Norman Bates at the end of the film.

(Spoilers ahead) In Psycho there is that riveting scene where Marian Crane talks with Norman Bates and they discover an uneasy kind of sympathy which so upsets Norman that he kills her later. Things happen a little differently in High and Low. Gondo and the kidnapper meet, but only at the end when the kidnapper has been sentenced to death. The sympathy seems to be all on Gondo’s side. Does he see a little of himself in him? 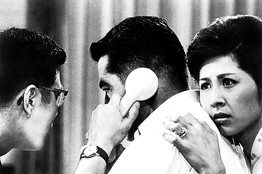 Mifune listens to the kidnapper’s instructions

The kidnapper tells of his terrible suffering and how much he grew to hate Gondo, living up in that large house on the hill looking down on him. The film ends with him screaming and going mad in chilling fashion while Gondo sits quietly. It’s rather appalling and reads like a powerful indictment. The suggestion is of the crushing, maddening force of soulless economic conditions. The irony is that in hating Gondo, the kidnapper hates a self-made man who has an essential humanity in him. The other executives of National Shoes, on the other hand, seem to be missing that essential humanity, not caring much whether the chauffeur’s son lives or dies. In the kidnapper’s quest to hurt Gondo, many innocent people are hurt: the chauffeur, several cocaine- addicts, people the kidnapper clearly regards as of no value.

Also ironically, he might have actually done Gondo a service, albeit a painful one. Gondo is on his way to becoming like the other executives – his wife complains of it – but ultimately cannot sacrifice a child for his ambitions, however much he tries to talk himself into it. When he meets the kidnapper, Gondo seems a sadder, wiser, and more compassionate man. Toshiro Mifune is an actor with charisma to spare, which makes his quiet sadness all the more striking at the end.

After watching High and Low, it seems that Akira Kurosawa totally could have directed horror movies (or did he?). Especially in the last third with the kidnapper and his sunglasses, making him look like an eyeless monster as he moves through the flowers and preys on a cocaine addict. Even the junkies seem curiously zombie-like.

But Kurosawa’s unique touch is not just limiting to the last third. Even though the first third takes place almost exclusively in Gondo’s living room, the dynamic way he uses the camera, moving one way to pick up a character who is about the speak, moving in and out, is always gripping. No matter where you pause, you can tell exactly what emotions characters are feeling by their posture. There is also the way the police are obliged to awkwardly pretend not to be listening while Gondo is alternately begged by his wife to save the child, betrayed by a close business associate, threatened by bankers, and also while the chauffeur is so desperate to save his son that he bows down and begs on his face for Gondo to save him. It’s a gut-wrenching moment. And an emotionally powerful movie.

Posted by christinawehner on January 30, 2017 in Movies

A taciturn stranger walks down a dusty road and enters a seemingly deserted town with wind and dust blowing down the wide, empty street. Then a dog trots down the deserted street carrying a severed hand in its mouth while the stranger watches quizzically, which pretty much indicates what sort of a movie you’re in for: a tongue-in-cheek samurai/western black-comedy/drama.

Yojimbo is the second film directed by Akira Kurosawa that I have seen – the first was Hidden Fortress – and already I’m hooked, though admittedly I’ve been sampling his more lighthearted fare. I’m also becoming a fan of Toshiro Mifune. The man has presence, a wry sense of humor, incredible speed and ferocity when he needs it and is absolutely riveting as an actor.

The film opens with an unknown samurai (Toshiro Mifune) entering a rather ruined looking town set during the Edo period in Japan (1603-1868, but this is definitely more the 1860s). The town is rent by two rival gambling gangs with their two rival mayors. Seibei (Seizaburo Kawazu) runs the brothel and wants to pass on all his possessions to his son, but his wife seems to be the one who’s really in charge. Ushitora (Kyū Sazanka) used to be Seibei’s right hand man, but resents Seibei’s desire to pass everything on to his son and set up his own gang with his two brothers.

But the stranger, who says his name is Kuwabatake Sanjuro (which means thirty yews trees, though he says he’s closer to forty), decides that this is just the town for him to stop in a while and plans to eliminate both gangs. He sets out to do this through a variety of schemes, involving hiring himself out as a bodyguard to both sides at various points and setting them against each other so they will do all the killing for him.

Things get a little dicey, however, when Ushitora’s brother, Unosuke (Tatsuya Nakadai) returns to town with a new weapon: a gun.

Yojimbo seems to draw strongly on American westerns. But in westerns, usually the taciturn stranger coming into town wants to be left alone and has to be persuaded to interfere. Not Sanjuro! He comes in, is warned to leave by a good man, but cheerfully decides to stay. It seems to him that there are a lot of people in town the world would be better without. He’s less trying to save good people and more trying to rid the world of bad ones 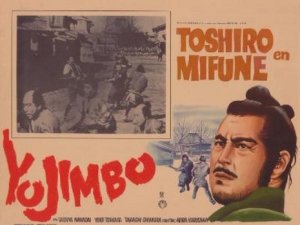 And interestingly, we get to know almost none of the people who live in the town, other than the two gangs. Sanjuro is aided by a slightly cranky innkeeper who bemoans the bloodshed, but thinks Sanjuro is mad to stay, and occasionally by the coffin maker, who actually likes the bloodshed, since it brings in business. The only other inhabitant we get to see is the useless constable, who is only good for calling the hours and whose cackles brings Walter Brennan to mind.

Sanjuro does take time out reunite a woman (lost by her gambling husband to one of the mayors) with her husband and child…though he gets positively cranky about any acknowledgement or thanks. Basically, he comes, he stays, he does his work and he leaves. He doesn’t thank anyone, doesn’t accept thanks – he just does it.

And with great humor. He’s a nameless and master-less samurai who’s motivations are obscure. He has a twitchy right shoulder (according to the documentary on the Criterion edition, it’s because he’s supposed to have fleas), is always rubbing his beard or scratching himself. His arms are often resting inside his robe as he walks insouciantly along, only to pull them out and dart about at lightning speed to kill hapless victims. And he never loses his sense of humor. After being beaten up, he is smuggled out of town in a coffin by the innkeeper and coffin maker, only to ask for them to stop and set the coffin down so he can watch Ushitora’s gang decimate Seibei’s (he says dryly that it sounds amusing).

There are some delightful visual and dramatic moments, such as when he manipulates both sides into an unwilling showdown in the street (the music is a great asset during all of this). He climbs up a tower to sit and watch with a grin while both sides tentatively and gingerly approach each other, often jumping back just as far as they jump forward (unfortunately, this brilliant bit of stage-management by Sanjuro is interrupted by the arrival of a government official).

And the final showdown is quite memorable, like one of those high noon moments. He comes back to deal with Ushitora’s gang, especially Unosuke. He enters town with the wind blowing and the dust flying in his eyes and faces the thugs at the other end of the street (the film practically lives on this one central road), led by Unosuke with his gun, while he, a lone man, approaches confidently with his arms resting in his robe. A thrilling ending.

I’ve read a lot recently about the influence of Kurosawa on George Lucas. I definitely noticed it in The Hidden Fortress and noticed some slight touches in Yojimbo, like Kurosawa’s use of wipes and the scene where Sanjuro cuts off the arm of one thug, which lands on the ground in exactly the same way as the arm of the alien in A New Hope who tried to mess with Obi Wan.

Next up for me is Sanjuro, and then possibly something a little more dramatic, like Rashomon (because the library has it). I’d really like to try Throne of Blood (which Diary of a Movie Maniac recommended as a great Kurosawa film, along with this film), because it is inspired by “Macbeth,” but neither my library nor classicflix has it. 😦 I’ll probably have to buy it (oh, the horror!).

Update: I was in a Barnes and Noble today and some how found myself buying Throne of Blood. Not sure how that happened.

Posted by christinawehner on January 18, 2016 in Movies, Uncategorized