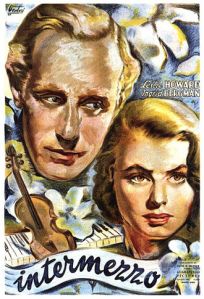 An intermezzo is “a short part of a musical work (such as an opera) that connects major sections of the work,” or more simply “a usually brief interlude or diversion” (these definitions come courtesy of the Meriam-Webster Dictionary). When pianists Thomas Stenborg (John Halliday) comes across his student, (Ingrid Bergman) playing an intermezzo with all the enthusiasm of “a climax,” he reminds her that she is giving the intermezzo of the piece too much importance. It’s a metaphor for her relationship with the married violinist Holger Brandt (Leslie Howard).

Intermezzo is an American remake of the 1936 Swedish film, which David O. Selznick liked so much that he bought the rights to the story…and coincidentally signed the leading lady of the film to a contract. And thus Ingrid Bergman came to American.

The plot is not really a plot, but more of a situation. Violinist Holger Brandt goes on long concert tours that keep him away from his family for months at a time and when he returns to his home in Sweden, his wife and his two children, he seems to be feeling a bit dissatisfied. He wants to run off with his wife and tour the world for a year.

But he soon meets his daughter’s piano teacher, Anita Hoffman (Ingrid Bergman), a student applying for a musical scholarship in Paris. She is young and has admired the great musician Holger for many years and before they know it, they fall in love. She feels a bit guilty, but Holger persuades her to go away with him and take that tour his wife would not take.

I have to admit that I like Leslie Howard much better in comedies or playing a character who is supposed to be a bit of a ham (like Professor Higgins in Pygmalion, or in The Scarlet Pimpernel or It’s Love I’m After). As Holger, he’s too mopey and indecisive. Characters are remarkably patient and forgiving considering his dithering and selfishness. What it seems to come down to is that he wants to feel young again, be free of responsibility. One can’t help but feel that he uses Anita because his wife wouldn’t take that year-long tour. Uses her to feel young again. Like he talked himself into feeling that he was deeply in love so he could justify his actions. If it’s true love, then he must be in the right…right? He’s a male Anna Karenina. Like Anna from the novel, he wins his point and goes off with the person he loves to Europe and travels and pretends to be sublimely happy and all the while is missing his family.

What holds the film together is Ingrid Bergman, who enters the film like a burst of warmth and sunshine that thaws out the film instantly. Last week I watched Notorious again and seeing Intermezzo not long after made for an interesting contrast. There are not many actresses who can convincingly portray innocence AND worldliness….not equally convincingly. Usually, one doesn’t quite buy one or the other. I think it’s the innocence that we believe least often.

I came across a quote recently by Lillian Gish in reference to her many roles with D.W. Griffith: “Virgins are the hardest roles to play, those dear little girls.To make them interesting takes great vitality.”

Lillian Gish possessed remarkable vitality. And although Ingrid Bergman is not quite as forceful as Gish, she too possessed the vitality necessary to play convincing and compelling innocent characters.

As Anita, she is warm, more girlish, innocent, without being naive or childish, and practically glows (the gorgeous cinematography was done by Gregg Toland). The plot never does much, but she graces it perfectly and she was the only character who commands sympathy and emotional investment.

She’s also the conscience of the film. Supposedly, Holger is suffering because of the deception of their affair, but he looks more annoyed at the inconvenience. It is Anita who is truly, deeply disturbed. And she’s fallen in love more deeply than Holger. However, one can’t help but be glad when she finally decides it is better to leave Holger and go on with her career. He’s not worth it and seems to be a rather needy person who would consume her life, though she does’t think of it in that way.

Intermezzo might best be called a romantic melodrama. The story never feels very urgent, it tends to drift along somewhat dreamlike, the dreamlike-quality perhaps owing to Gregg Toland. It really is a gorgeous film. Holger and Anita once tease about Anita being a phantom and in one scene Holger is looking up at Anita, who is standing at a second-story window and in the shadows she seems to be disappearing like a ghost. The use of shadows and light is breathtaking. As is Ingrid Bergman.

This post is part of The 2nd Wonderful Ingrid Bergman Blogathon, hosted by The Wonderful World of Cinema. Be sure to read all the other excellent posts about Ingrid Bergman, here!

Posted by christinawehner on August 29, 2016 in Movies